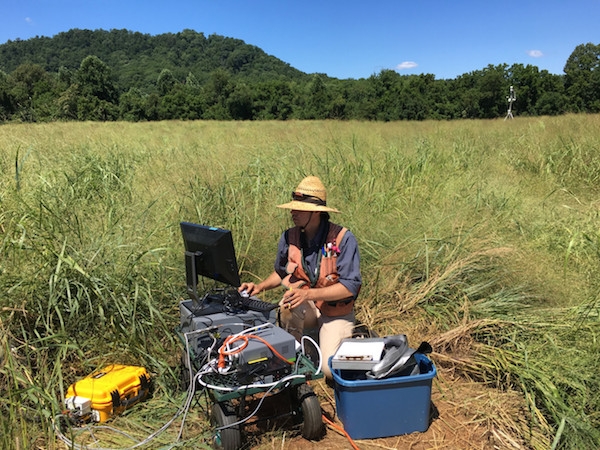 Quantifying the net impact that growing biomass feedstock for biofuel has on local temperature and carbon sequestration can aid the development of effective land-use policies and is the key of a new research project led by Clemson University scientist Thomas O’Halloran.

“If we incentivize the Southeast to plant switchgrass instead of loblolly pine, for example, how would that affect local climate? This study will give us some answers,” said O’Halloran, assistant professor of forestry and environmental conservation at Clemson’s Belle W. Baruch Institute of Coastal Ecology and Forest Science in Georgetown. “Biofuels are about reducing fossil fuel use in the interest of benefitting the climate, so this research is about getting a holistic view on whether this is actually beneficial to the environment.”

O’Halloran received a $147,744, two-year grant from the U.S. Department of Agriculture’s National Institute of Food and Agriculture (NIFA) to analyze how switchgrass fields and loblolly pine forests affect local temperatures through the exchange of water, energy, radiation and carbon with the atmosphere. He’ll also quantify below- and above-ground carbon fluxes in both loblolly pine and switchgrass plantations and assess the greenhouse gas emissions of the full biofuel production chain for each crop. This will provide a comparative picture of the potential of these feedstocks to reduce carbon emissions when generating electricity by co-firing in a coal power plant. For this, O’Halloran will collaborate with Pragnya L. Eranki, deputy director of research for the Institute for Sustainability in Clemson’s Glenn Department of Civil Engineering.

“We will be able to identify greenhouse gas hotspots along the entire supply chain, including biomass cultivation and harvest in the field, intermediate storage, biomass transport to the coal-firing power plant and the actual generating of the electricity in the plant,” Eranki said.

This life-cycle assessment is unique, Eranki said, because it will utilize atmospheric field data that is often excluded or unavailable.

O’Halloran will collect atmospheric data from sensors mounted to research towers in switchgrass and pine plantations at Sweet Briar College, where he previously worked as an environmental science professor. The college is home to two land-atmosphere research stations (LARS), one that stands nearly 120 feet high in a pine forest and a 14-foot tower in a 300-acre switchgrass field.

Sensors mounted to the towers monitor the cycling of water, carbon and energy between the land and the atmosphere. Such data collection already has allowed O’Halloran and other scientists to quantify and map the cooling effect forests have on surface temperatures.

Loblolly pine can be ground into pellets that are burned for fuel. During the first half of 2016, U.S. manufacturers produced 3.3 million tons of wood pellets and the market is growing, according to data from the U.S. Energy Information Administration. Switchgrass also can be burned as fuel or converted to cellulosic ethanol and has been discussed as a low-cost commodity for the agriculture industry.

“Loblolly pine is the largest type of managed forest in the Southeast, and there is a lot of interest in switchgrass because it is native, it grows well and is on the table as a viable feedstock for biofuel,” O’Halloran said.

NIFA awarded the two-year grant as part of an effort to help the agricultural industry “adapt to and mitigate the effects of changing environmental conditions,” according to a statement.

“We have to develop robust plants, animals and management systems that can flourish under challenging environmental conditions,” NIFA Director Sonny Ramaswamy said in a statement. “We expect that the outcomes of these investments will support American farmers and producers, and ensure their profitability.”

Additional collaborators on the project include Quinn Thomas in the department of forest resources and environmental conservation at Virginia Tech. Initial funding for the switchgrass tower was provided by the Global Change Center at Virginia Tech. The switchgrass plantation at Sweet Briar College is managed by FDC Enterprises.