March 22, 2017 - As Canada works its way to becoming coal free by 2030, Resolute Forest Products, the largest sawmill company in Eastern Canada, is making headway to achieving its goal of fossil-free operations. 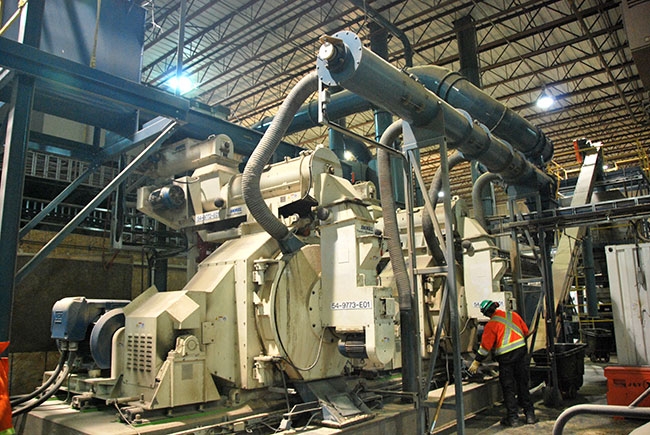 Ninety-four per cent of the plant’s fibre diet comes from the Thunder Bay sawmill located adjacent to the pellet plant. The final six per cent is sawdust shipped in from Resolute’s sawmills in Atikokan and Ignace

One cog in that wheel is a pellet plant that opened on site at Resolute’s sawmill in Thunder Bay, Ont., in October 2014. The pellet plant was built to supply Ontario Power Generation’s (OPG’s) first fully pellet-fuelled power plant, which opened in Atikokan, Ont., 200 kilometres northwest of Thunder Bay, after a two-year conversion project that same year.

“The pellet mill is achieving our capital project forecast,” says Michael Martel, vice-president of forest products operations for Resolute in Ontario and Quebec, following a tour of the operation in December. The pellet plant is producing 45,000 tonnes per year, with a design capacity of 60,000 tonnes.

The $10-million plant receives sawdust from the Thunder Bay sawmill directly by conveyor, which makes up 81 per cent of the plant’s fibre diet. Another 13 per cent is from planer shavings, which are added to the sawdust mix. The final six per cent is sawdust shipped in from Resolute’s sawmills in Atikokan and Ignace, Ont.

The resulting pellets are made up of spruce, pine and fir, and are six millimetres in diameter with moisture content between four and six per cent, which is according to specifications by OPG. OPG does not require the pellets to be certified, however, all fibre harvested for Resolute’s sawmills is from certified woodlands.

Thunder Bay is the first pellet production facility for Resolute.  “We’re fully integrated right now. If you look at Thunder Bay, Atikokan and Ignace, we make lumber at three facilities, we make pulp, we make paper and we make power,” Martel says.

Inside the operation
The pellet plant is located just steps from the Thunder Bay sawmill, connected by a series of ducts and conveyors. An outdoor Wellons burner fuelled by bark from the sawmill provides heat for the pellet plant’s TSI dryer. Rodrigue Métal out of Quebec supplies the duct system.

Dried wood biomass is then channelled into the pellet plant where two 400-hp pellet machines, both supplied by Andritz, compress the sawdust and shavings. Law-Marot-Milpro (LMM), which at the time was associated with Andritz, supplied the coolers and screens. Once the pellets are cooled, three 100-tonne silos store them before they are shipped to OPG’s power plant.

“It’s basically a big pipe with a dampener that allows the system to recycle the air at the outfeed of the dryer and send it back to the dryer,” says Maxime Langlais, general manager for Resolute’s northwestern Ontario sawmills. “It’s giving us more capacity and more stability for drying and also reduces the risk of internal fires.”

Since hot air from the burner is fed directly into the dryer and the sawdust, the plant has a sparks and heat detection system supplied by Flamex. A mist and deluge line prevents accumulation of flammable pitch in the ducts after the dryer. As well, a contractor cleans the ducts with water pressure every month.

There are no further upgrades planned for the plant, however, Langlais says ideally they would consider a system to automatically feed the planer shavings into the dryer, similar to how the sawdust is conveyed directly from the sawmill.

Langlais, who also manages Resolute’s three sawmills, says he’s relatively hands-off the pellet plant now that it is operating as expected. The plant requires just one dedicated staff member, Jeremy Palmer, who is the general supervisor of the pellet plant and kilns. Palmer supervises a crew of around 11 other Resolute employees.

“It’s running well so I don’t have to intervene, Jeremy is taking care of it,” Langlais says. “He was a sawmill supervisor so he had to learn the pellet process, but now he knows more than us and has done very well.”

Learning to run a pellet plant was an adjustment for the Resolute sawmill team, Langlais adds, but “At the end of the day, it’s screws, conveyors, drying and other things that we are used to.”

Finding new markets
The present impediment to increasing production at the pellet plant is a matter of markets – finding new customers.

“At Thunder Bay we’d like to produce more, but we’re very far from the market,” Martel says. “We’ve had some small shipments here and there that were test shipments, but to produce more we need to reach out and develop our customer base. We’re committed at the current production level with 100 per cent going to OPG.”

Resolute has a 10-year contract to supply OPG with pellets to run the power plant, but Martel is optimistic it won’t be long before the plant is producing more to meet new domestic demand.

“As we go into a fossil-free economy in Ontario – the Ontario government says, ‘Off coal, off natural gas’ – there will be an incentive for people to look at alternatives and those pellets could find their way into that,” he says.

Ninety-four per cent of the plant’s fibre diet comes from the Thunder Bay sawmill located adjacent to the pellet plant. The final six per cent is sawdust shipped in from Resolute’s sawmills in Atikokan and Ignace

Going green
While Resolute has no known plans to build pellet plants at its other sawmills across Eastern Canada due to lack of demand, the company has several other green projects on the go.

In northwestern Ontario, bark and sawdust from Thunder Bay, Ignace and Atikokan sawmills are funnelled into a 65-MW turbine at the nearby Thunder Bay pulp and paper mill, which is the largest green energy combined heat and power unit in Ontario.

The company has similar co-generation facilities at six other sites, producing a combined 520.7 MW. Those in Canada include a 43-MW facility at Resolute’s softwood kraft pulp mill in Saint-Félicien, Que., a 28-MW facility at their specialty paper mill in Dolbeau-Mistassini, Que., and a 15-MW facility at their newsprint plant in Gatineau, Que.

“We believe in energy and we have a huge drive over the last many years to reduce our carbon footprint,” Martel says. “Our goal is fossil fuel free. We want everything to be green energy. We do use some natural gas in Atikokan for drying wood, and we use some natural gas in Thunder Bay pulp and paper as well, but we’ve dramatically reduced our
emissions.”

We toured the @resolutefp #pelletmill in Thunder Bay today. Look for a full story in the magazine and online soon. pic.twitter.com/sG3a8q70r5