Wood Pellet Association of Canada's Gordon Murray asks, 'As the world looks to bioenergy, isn’t it time Canada did the same?' 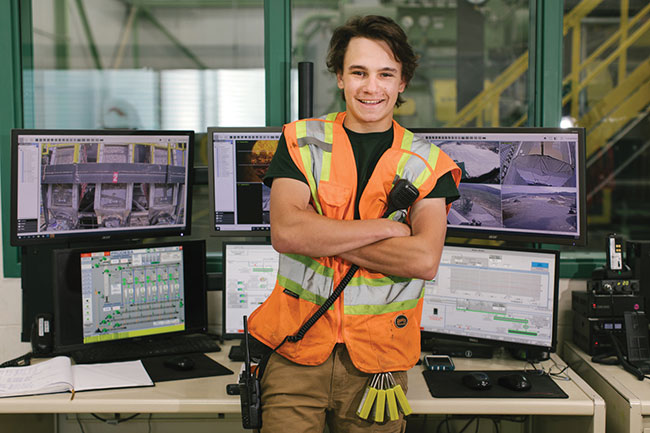 Increasing adoption of bioheat in New Brunswick would reduce reliance on imported fossil fuels and support local family-supporting jobs for people like Samuel Godbout, who is apprenticing as an industrial mechanic at the Grand River Pellets plant in St. Leonard, N.B. Photo courtesy Grand River Pellets.

Bioheat dominates because it is affordable, proven, reliable, and supports the forest sector and local economies. A tonne of delivered wood pellets at $275/tonne is $0.065/kWh for useful heat. Compare this to Canada’s province of New Brunswick, where wood pellets are approximately half the current residential price for electricity. Despite these savings, Atlantic Canada remains heavily dependent on oil-burning home heating systems, and residents of the region experience some of the highest rates of energy poverty in the nation.

In 2016, the New Brunswick government introduced the Climate Change Act and its plan, Transitioning to a Low-Carbon Economy. Today it reports that it has reduced GHG emissions by 38 per cent over 2005 levels. However, much of this can be attributed to industry facility closures and fuel switching from fossil fuels to biomass in the forest products sector. The government recently invited presentations from subject matter experts and First Nations. The Wood Pellet Association of Canada (WPAC) was proud to present at a series of meetings and provide a formal response. We hope to see our recommendations and input reflected in its updated plan to be released later this summer.

Like most regions of the world, New Brunswick is electricity supply-constrained, making up only 21 per cent of energy consumption in the province. New Brunswick also has amongst the largest electricity demand peaks in North America, but lacks the low-carbon dispatchable resources of other jurisdictions.

As a result, the province will need to create a tailored approach that recognizes its available resources and electricity supply constraints. Today, New Brunswick meets its demand for heat by importing fossil fuels from the United States, Africa and the Middle East, exposing its citizens to volatile energy prices and undermining its own climate change goals.

The fact is, the solution lies in the forests of New Brunswick. The province is home to five wood pellet plants that produce approximately 350,000 tonnes per year. This fuel has an energy content of over six Peta Joules (PJ) and could replace all heating oil and natural gas consumed by commercial and institutional buildings in New Brunswick. However, due to little local demand, over 90 per cent of its wood pellet production is exported. Most of these exports are destined for Europe, where customers value the quality and environmental credential of these pellets and their role in realizing significant GHG reductions. As a result, the province also forgoes 1.3-1.7 Mt CO2 per year (10-14 per cent of New Brunswick total) in GHG reductions.

The science shows that when you increase the demand for bioheat, you also contribute to better managed forests. In Sweden, bioenergy, largely in the form of wood, provides 37 per cent of the energy supply. Since 1990, Sweden’s bioenergy consumption has doubled and, at the same time, its standing timber volume has increased by 40 per cent. This increase in standing timber volume is not in spite of bioenergy, it is because of bioenergy .

Bioenergy provides a market for low-grade material that permits forests to be better managed for increased productivity, vigour, and health. In fact, the net annual increase in standing timber in Sweden is so large it reduces national GHG emissions by 70 per cent. As the New Brunswick government updates its action plan, we hope they will take cues from countries like Sweden and see bioenergy for the massive opportunity it is.

We applaud the New Brunswick government’s actions to date and their willingness to continually evaluate progress and adapt along the way. We support their call for more emphasis on renewable energy. The magnitude of the opportunity for a dramatic change in energy consumption in New Brunswick is significant and generational.

As the New Brunswick government’s plan reads, “climate change is a shared responsibility,” and WPAC Maritime members remain ready to support their plan and deliver real, tangible benefits to the local communities we serve. Together we will shine a light on the benefits of wood pellets and drive significant environmental benefits, save consumers money, create jobs and support a healthy domestic forest sector. •