A wood pellet silo fire has a number of risks that may cause serious injuries or death for plant personnel and emergency services personnel. Millions of dollars of pellet plant infrastructure can also be damaged. 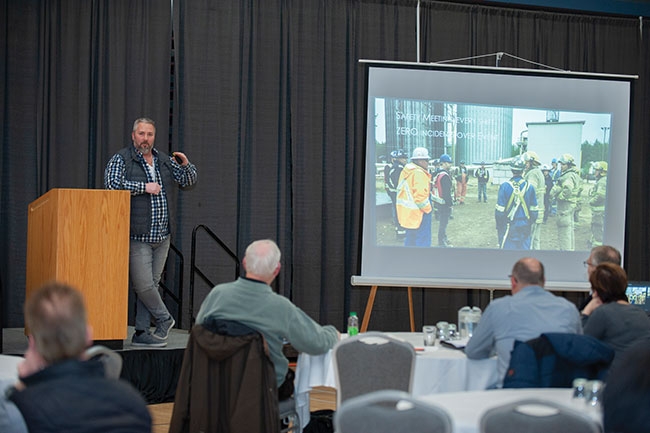 Silo fires are unique and require a different approach than conventional fires. Since they rarely occur, fire-rescue personnel have little experience in dealing with these types of fires. But because the fire development and the emergency response processes are different from conventional fire rescue processes, it is essential to consider the specific conditions of the silo fires in order to have an effective emergency response. In the case of the silo fire at Pacific BioEnergy’s plant, the specific emergency planning done by the Pacific BioEnergy team and the fire rescue personnel was key to success.

Smoke from smoldering wood pellets inside the PacBio silo was first noticed on the evening of Wednesday, August 23, 2017. The fire was extinguished within seven days, the silo was saved, and no one was injured. In most cases, these type of silo fires are caused by self-heating of the stored material due to different chemical and biological reactions that lead to spontaneous ignition. These fires usually start deep inside the material and thus are hard to detect early. Based on our understanding of past silo fire incidents, it is recommended to measure the concentration of gases such as carbon monoxide and carbon dioxide, as well as temperature, in the silo for early silo fire detection. Some other fires are caused by external ignition sources, either high pyrolysis gas concentration build up in the silo or dust exposed to an external ignition source. A record of past incidents shows that gas and dust explosions may lead to very extensive damages and are thus the most serious danger associated with silo fires. One lesson learned from the Pacific BioEnergy silo fire incident and previous incidents is to always maintain the monitoring, detection and suppression systems in good working condition.

When dealing with a silo fire, it’s critical to identify the type of silo and fire. You need to know if it is a smoldering fire or a fully developed fire with open flames. There are several instances where not knowing the structure and type of fire resulted in unsuccessful outcomes. For example, if it is a smoldering fire, it usually develops deep in the material and spreads downwards. The pyrolysis gases and moisture slowly spread upwards but it may take days to be able to detect signs of fire. In a number of industry incidents, this has been the case. High levels of carbon monoxide may be produced and thus it is crucial to carry out an initial risk assessment and establish access rules. It’s always essential to wear detection instruments that can measure and detect both carbon monoxide and oxygen. The gas mixture presents a great risk for poisoning, and, in the worst case, loss of consciousness or death. Lessons learned from past incidents show that it is best to measure the concentration of carbon monoxide and oxygen in the silo head-space and check for flammability risk. As there is a risk of gas build-up in the silo head-space and thus explosion, it’s highly recommended that no personnel be at the top of the silo during silo fires.

The main recommended method to extinguish a wood pellet silo fire is to inert the silo using nitrogen from the bottom of the silo, then discharge the silo contents and extinguish hot materials. Nitrogen should be injected close to the bottom of the silo at a recommended rate of at least five kg/m2 per hour. However, if the explosion risk in the silo head-space is high due to high gas concentrations (meaning carbon monoxide is greater than two to five per cent and oxygen is greater than five per cent), nitrogen injection should be done in the head-space first. For silos with a small diameter, usually one gas inlet is sufficient, but for larger silos, it is best to apply nitrogen at multiple points to ensure even distribution within the bulk of material. You should also seal the silo thoroughly to reduce the smoldering fire development and spread. This can be done by turning off the ventilation system and blocking all hatches, openings and connections to the transport system and the dust ventilation system. It’s always a good idea to check the delivery time for nitrogen as it may be long and there might be a risk of open fire. In such cases, it is best to cover the pellets with medium- or high-expansion fire extinguishing foam to prevent materials from accessing oxygen.

The discharge operation should start only if the fire is under control, oxygen concentration is less than five per cent and the concentration of carbon monoxide is significantly reduced. While removing the material from the silo, keep injecting the nitrogen to the silo bottom. Based on Pacific BioEnergy’s incident, as well as other silo fires, you will have smoldering material coming out and will get clumps and carbonized material. Consequently, it is essential that well-equipped fire rescue personnel be present in all stages of material discharge. While discharging the material, you should also continuously assess the situation inside the silo using the gas reader instruments. High concentration of oxygen or carbon monoxide may indicate you have some leakage of air to the silo or increased material reactivity within the silo. When removing the material, always try to limit dust formation. When you remove the material from the silo, store it in an open area far from facilities and buildings.

A number of lessons can be learned from past incidents. Incorrect tactics can destroy buildings and other assets, as well as result in injuries and loss of life. The following are key points when dealing with a silo fire:

Fahimeh Yazdan Panah, PhD, PMP, P.Eng, is the Director of Research and Technical Development for the Wood Pellet Association of Canada. She has held several positions including research associate for the Biomass and Bionergy Research Group at the University of British Columbia.