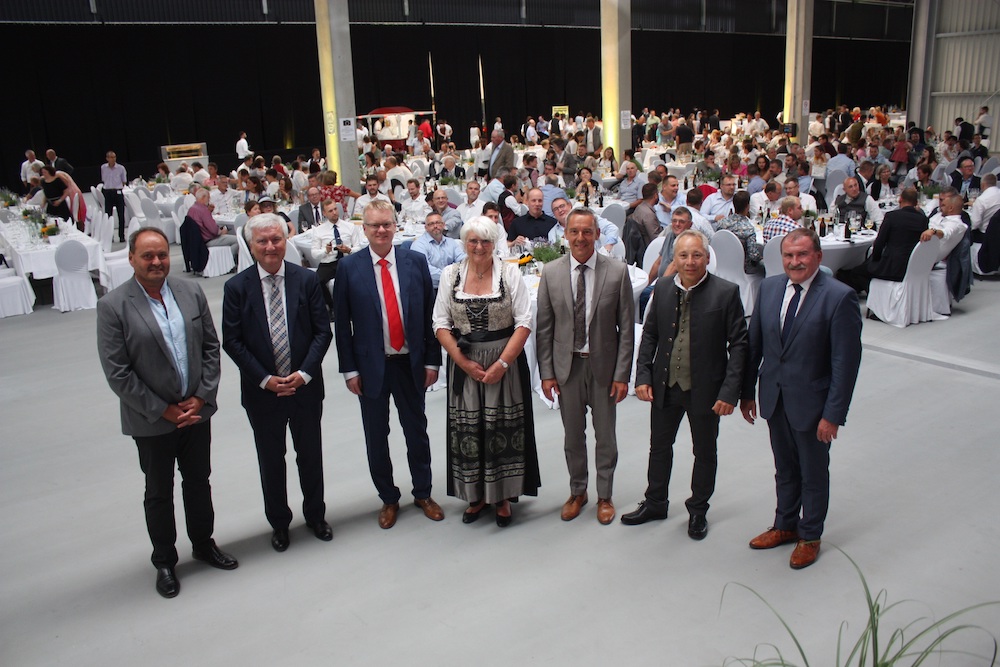 Stela Laxhuber GmbH – global player and flagship when it comes to drying plants – celebrated its 100th anniversary on 24 June 2022. In the course of a century, the company has developed from a wind well producer to an agricultural machinery dealer to today’s world-renowned specialist for drying systems of all kinds.

Its story is one full of challenges faced by generations in often hard times. Having grown continuously through diligence and ever further development, the company was now able to hold a glittering celebration.

A keyword ran through the evening’s speeches: challenges. This should be understood more or less like a motto – especially in relation to stela.

Before being used for their actual purpose, the new – recently completed – factory halls served to celebrate a double birthday party – 100 years of stela and 40 years of stela Steuerungstechnik. Beside this, the recently awarded Bavarian SME Prize – which went to stela this year – was highlighted once again. In the laudatory speech by Peter Glas (Vice President of the Lower Bavarian Chamber of Industry and Commerce), the unconventional approaches to challenges on the part of stela were singled out for extra praise.

Thanks to months of perfect preparation, more than 900 guests from all continents were able to attend this celebration. Welcomed with drinks, small snacks and a delicious ice cream stand, the new and festively decorated factory halls filled up in no time.

As stela has now installed 4012 plants in 67 countries, the guest list was long enough to match. The guests also reflected the company’s customer base – as stela offers solutions for the small organic maize farmer as well as plants for huge sewage treatment and OSB plants. Well-wishers from numerous countries attended the positive yet thoughtful speeches. One of the guests of honour was Mr Baumer – who was the first customer to opt for a stela drying system back in 1967.

First and foremost, Mrs. Thea Laxhuber – mother of today’s managing director Thomas Laxhuber – looked back on the past decades. Her touching choice of words emphasised the diligence that was able to turn an idea into a globally active company despite all the turmoil of the 1920s. The challenges then were in many ways the same as they are for us today. Just as in the 1920s, we too are affected by war, supply fears and the energy crisis.

“100 years ago, everything revolved around the wind – a state of affairs we’re once again returning to today” – is how Member of State Parliament Max Straubinger summed things up while highlighting stela’s beginnings. Back then, wind wells were offered to irrigate the fields; today, wind power and the resource-conserving use of raw materials and energy are essential.

Stela has been a pioneer in this area for 100 years – with sustainability deeply embedded in the DNA of the family-run company. As a company supplying energy-efficient systems and despite its growth, stela is also looking to become more and more energy-efficient itself.

Since 2020, the company has been climate-neutral, the vehicle fleet has been converted to electric drives, and “refuelling” is achieved by an in-house solar system.

These are challenges that the company is already meeting – while others are still only talking about them. Just like the shortage of skilled workers.

In his speech, Rainer Hettwer, the second Managing Director, referred to this typical stela hands-on mentality – a vital strategy when it comes to training future workers for consistent growth. This also explains why 20 years ago stela employed 50 people – whereas today it employs 220.

Christian Thiel, Mayor of Massing, had some very thought-provoking words to say – as he could not only see positive aspects of the development of globalisation in the last 20 years. He referred to numerous family-run companies that have been bought up and relocated or that have disappeared altogether. He was all the happier to talk about stela and highlighted the social commitment of the family-run company – be it for the employees, clubs and institutions in the area, but also during crises abroad, such as the conflict currently being fought in Ukraine.

This war is yet another challenge – and stela has gone to actions stations here. At the outbreak of the war, an opportunity was quickly provided for people in the area to drop off donations in-kind and in money – whereby stela has been taking care of the transport of the necessary goods in an attempt to play its part in alleviating the suffering.

These serious issues were also part of the double birthday celebration. And precisely because stela had invited guests, the mood remained on a high note – since like hardly any other company, stela stands for continuity, constant development and the absolute will to make the best out of the given situations.

The drying of recycling material is also becoming increasingly important in times of climate crisis. “When it comes to recycling, we now only talk about raw materials – and no longer about waste”, is how Thomas Laxhuber summed things up in one sentence.

The event included an outlook for the next few years. In an era of rapidly transforming economies, the name of the game is not only to recognise trends – but also make use of them.

In the next few years, the company will grow in the area of drying for chipboard and pellet production.

The cuisine on offer also lived up to the event’s festive setting. A mouth-watering choice of dishes and desserts was followed by a magical evening of music played by the extremely popular Bavarian band LaBrassBanda. A fun time was had by all. Dancing and festivities continued until the early hours of the morning.

Everything was soon back to normal the following Monday – the halls where the venue was held now fulfilling their actual purpose. There is no time to stand still – the new factory halls are urgently needed, and the new company location in Massing was also deliberately chosen so that there is still enough room for expansion of the factory premises.

There is a lot to do – and we can look forward to seeing what new systems stela will introduce and install in the next few years.