May 9, 2018 - The annual European Pellet Conference (EPC) took place in Wels, Austria from February 27 to March 1, 2018. Scott Bax of Pinnacle Renewable Energy, John Arsenault, WPAC’s Director of Market Access and Promotion, and I participated. The EPC is one of the largest annual global wood pellet events with about 560 participants. The event focusses mainly on the commercial and residential applications for wood pellets. Speakers and participants come from Europe, North America, South America, Asia, Africa and Australia. 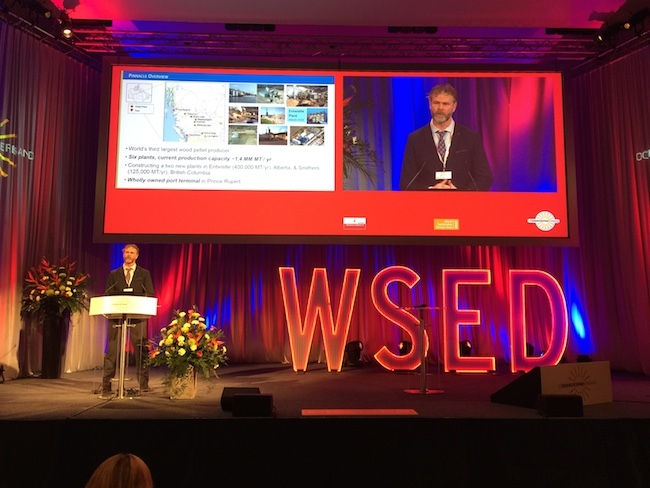 The conference sessions took place on February 28 and March 1. A variety of topics were covered on February 27 while the March 1 session was focussed on reports from individual country representatives on the situations in their own home markets. Scott Bax gave a presentation on safety operations in wood pellet plants; Gordon Murray was the moderator for the session Pellet News Worldwide.

• Dr. Ute Collier of the International Energy Agency reported on the IEA’s Bioenergy Roadmap. Bioenergy is expected to account for 17 per cent of all energy by 2060, up from 4.5 per cent today. Strong acceleration of bioenergy deployment is needed. Presently 80 per cent of renewable heat in Europe comes from bioenergy.

• Jan Steinbach of the Fraunhofer Institute reviewed research on mapping the European heating sector. He expects that the future of residential pellet combustion can rely on fuel flexibility, high efficiency operation at condensing mode and almost zero emissions. These features will support the further market penetration of pellet combustion plants and increase the public acceptance as well as market share for the new technology.

• Dr. Ingwald Obernberger presented research on how the design of small-scale pellet boilers can be improved to increase their competitiveness on the residential-scale heating market by increasing fuel flexibility, further reducing emissions and the integration of advanced flue gas condensers to increase efficiency.

• Windhager’s Manfried Faustman emphasized the important role that boiler installers as being the front-line representatives for our industry. Often installers are the ones who recommend which systems to use. The quality of boiler installations will affect word-of-mouth communication that can have a huge influence on the success of the biomass boiler market.

• Stan Elliott of the Pellet Fuels Institute reported that exports account for about 80 per cent of the 6.9 million tonnes of U.S. pellet production. U.S. domestic pellet consumption is stagnant as a result of competition with low heating oil costs, repeated warm winters, lack of government incentives, and poor technology. He said, “The vast majority of pellet appliances being offered are still black box room heaters.”

The European Pellet Conference is a great place to become informed about the latest European and international biomass policy developments and how they are likely to affect future business strategy; learn about new technology; and to get first-hand information on worldwide wood pellet market conditions. With more than 500 participants, it is an ideal opportunity to connect with customers, competitors, and suppliers, and to promote Canada as a reliable source of high-quality, sustainably produced wood pellets.