March 28, 2016 - A true scientist keeps an open mind and avoids making assumptions. Ideas that seem plausible must be tested, retested, and tested once more. Most ideas die on the vine, but once in a while an idea has legs and wings and catches everyone by surprise, including the person who came up with it. 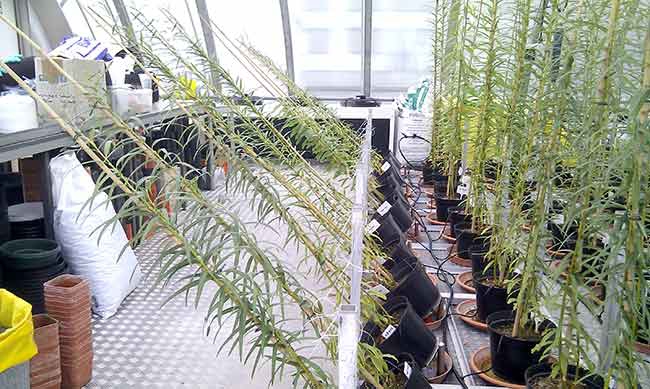 The move to phase out coal power in Alberta could mean the expansion of biomass power in the province. A true scientist keeps an open mind

So it was with the idea of growing willow trees at an angle in hopes of increasing their biofuel yield that Nicholas Brereton, a research fellow at the University of Montreal’s Plant Biology Research Institute (IRBV) and graduate of Imperial College London in the U.K., had tested several other growth conditions in hopes of squeezing more “juice” from the willow trees, but none had panned out. “Tipping trees seemed a little ridiculous, but testing fanciful ideas is part of the scientific process,” he says.

BioFuelNet agreed. Brereton’s project has earned a place among the Pan-Canadian Feedstock Trials, a research block recently integrated into BioFuelNet’s funding structure. These trials have an overarching vision in common: establishing a cost-effective and sustainable feedstock production system across the country.

Why use willow trees in the first place? According to Brereton, “some varieties have the highest-recorded biofuel yield of any trees on the planet.” They’re also hardy, thriving in windy slopes and poor soil where more delicate species might not survive. “They have strong roots, efficient nutrient absorption, and grow very fast,” he adds.

On trips to Scotland, Brereton had observed that strong winds exerted considerable pressure on willow trees, bending their trunks down to angles as high as 45 degrees. When he analyzed the wood from those trees, he found that it produced five times more sugar than expected. “The increase in yield was bigger than anything we’d ever tested before,” he says.

On a whim, Brereton decided to replicate the tilted growth pattern under controlled conditions. He took baby willows to the Imperial College greenhouse and grew them at a 45-degree angle. To his happy surprise, the wood in these “cultured” willows showed the same qualities as the wood in the windswept Scotland trees.

Ever the scientist, Brereton wanted to know why. Having recently seen a London Natural History Museum exhibit in which researchers used computed tomography (CT) to scan fossils, he contacted museum personnel and asked if he could borrow their equipment. “Our building adjoins the museum, so I just hauled my samples over to the museum equipment,” he says with a chuckle. The high-resolution technology enabled him to view the composition of the wood at a cellular level. “We found that tilting the tree prolongs the life of certain cells that would normally die,” he says. This leads the tree to produce a gelatinous, sugar-rich fibre – the tree’s strategy for staying upright – that accounts for its increased biofuel yield.

It was through BioFuelNet that Brereton’s work came to the attention of Michel Labrecque, an adjunct botany professor at the University of Montreal and head of the research division at the Montreal Botanical Garden. “One of my BioFuelNet colleagues had collaborated with Nick and told me what he was doing,” he says. “It seemed like a good idea to import his expertise.”

Labrecque’s own expertise lies in phytoremediation, the ability of plants to tolerate and even thrive in harsh conditions. “We know that willow trees grow well in soil that contains long hydrocarbons produced by the oil industry,” says Labrecque. “They can actually help decontaminate polluted soil.”

In order to figure out what conditions prompted the trees to get into this “clean-up mode,” Labrecque’s research group was working on analyzing trees’ responses to different stressors – a hand-in-glove fit with Brereton’s work, as it turned out.

Brereton readily accepted Labrecque’s offer to join his lab as a post-doctoral fellow, with partial funding from BioFuelNet. “Canada has many species of willow trees – in fact, a third of our woody flora is composed of willows – and many different environments, so it’s the perfect laboratory for the type of work I’m doing,” he says. What’s more, a network of willow-based phytoremediation trials already exists across the province of Quebec.

Over the past year, Brereton and Labrecque have been following two parallel tracks: identifying stressors that trigger phytoremediation and those that produce better wood. In addition to wind, they plan to investigate the impact of dry soil, marshy soil, and soil with different types of pollutants. “It stands to reason there might be an overlap between the variables that lead to phytoremediation and those that improve the quality of the wood,” says Brereton. If his hunch proves correct, the commercial applications could be huge. “Having trees that can clean up the land and give a high yield of biofuel makes it economically viable to compete with the oil industry.”

BioFuelNet has recently agreed to fund the second phase of the project. This phase has the researchers teaming up with colleagues in Alberta and Northern Ireland, who are shipping them a variety of local tree samples treated with different contaminants. “Our hope is that some of the samples will have that win-win quality we’re after,” says Brereton. Looking further ahead, the group plans to induce the beneficial stressors artificially, much as Brereton did when he angled greenhouse-grown willow trees.

BioFuelNet has also integrated the project into its Low Cost Sustainable Feedstock Task Force, a multidisciplinary group involving members from academia, industry and government. The task force seeks to take the uncertainty out of sourcing low-cost, reliable and sustainable feedstock supplies for biorefinery operators. Dr. Brereton’s work has the added advantage of using land unsuitable for conventional agriculture.

Although Brereton says he “wouldn’t mind seeing the end of the winter snow,” he hopes to stay in Canada for the foreseeable future. “Everyone is so nice here,” he says, adding that “in London, people can be a bit brusque.”

Wherever he ends up, Brereton plans to continue tapping the willow tree’s rich potential. “It’s rare that you find a line of investigation that has such low risk and high potential,” he says. “It’s a path worth exploring further.”