April 26, 2019 - Huska Holdings in the B.C. Interior has been in the wood waste recycling game for nearly 25 years. For those keeping count, that makes the company a longstanding fixture in an industry that’s not much older than they are. 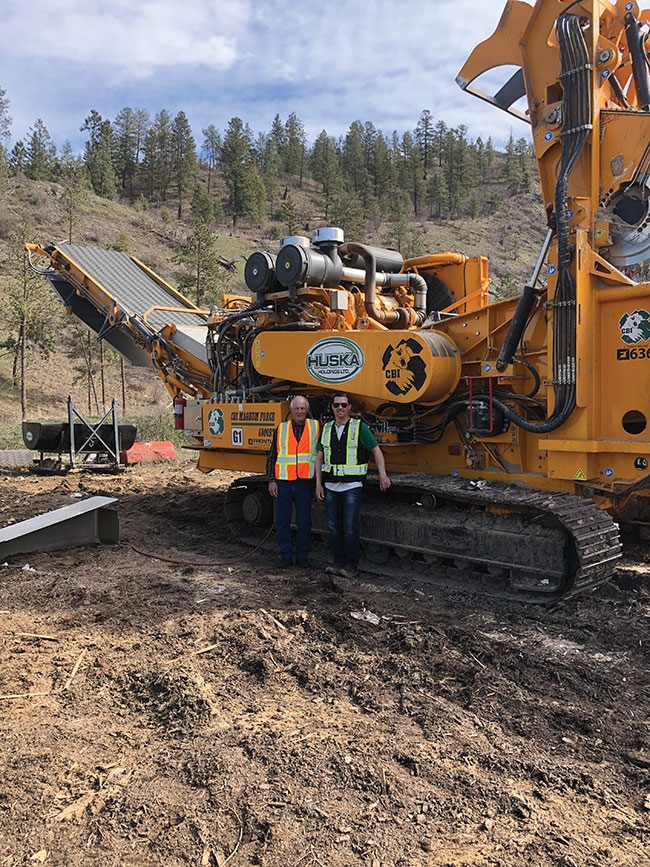 From left, Pat Huska and his son, Justin, are the first and second-generation owners of Huska Holdings, a wood waste recycling company in the B.C. Interior. Photos courtesy Huska Holdings.

“It was quite the machine. I think we worked on it more than we actually ground wood with it. It took two people to operate – the excavator operator and then someone on the ground because the controls were tethered to the machine,” Justin says.

“I always tell the guys who work for us now that they’ve got it pretty easy with the way technology has changed machinery. It would be a nice test for them to actually run one of these old grinders, because they would have a real appreciation as to how far they’ve come in terms of technology,” he says.

Today the company operates three horizontal grinding machines, employs around 10 people and contracts their services to more than 20 customers across the province.

While the woody biomass industry ebbs and flows, intrinsically tied to the larger B.C. forest products industry, Huska Holdings has managed to stay profitable and provide an environmentally responsible solution for landfills, sawmills, and biomass producers and consumers.

Huska history
Husband and wife team Pat and Connie Huska started up the company – then called Huska Excavating – in Williams Lake, B.C., in the early 90s. The company’s original focus was roadbuilding for the logging industry in the B.C. Interior.

Huska Excavating branched out to wood waste recycling in 1995, renaming to Huska Holdings and purchasing its first grinder to fulfill contracts with landfills.

“The majority of our work was actually landfill reductions. We would grind whatever the public brought in – branches and pallets. A lot of that was landfilled after we ground it, or used for landfill cover. At that time the biomass industry was a real distant secondary industry for the forest industry,” Justin says.

A couple years later, Atlantic Power started up its Williams Lake Power Plant fuelled by wood waste. The plant was a big step forward for the woody biomass industry in a time when sawmills were still operating beehive burners to cost-effectively eliminate their wood waste.

“Over the years we’ve seen quite a change in where a lot of the biomass goes. There’s a lot more opportunity to utilize a lot of the wood waste,” Justin says.

While Justin was involved in the family business from the beginning, the early days were also the heyday of his professional motocross career. Justin’s career highlight was a fifth place national ranking in 1996 and 1997. His racing took him all across North America and Europe.

“When I wasn’t racing I was working the family business. It was a good job to come home to because they were pretty lenient about my hours and schedule,” Justin says with a chuckle.

In 2002, Justin retired from the sport and took on a management role with the family company.

Grinding fleet
With a 25-year track record, Huska Holdings is a well-known full-service grinding operation in B.C. The company offers site consultations to determine the best approach to process the material, grinding services, and hauling services to remove the wood waste.

The company owns two CBI 6800BT horizontal grinders – one 2014 and one 2017, both purchased from Frontline Machinery – and rents a third of the same brand and model. These tracked machines are designed for high-volume throughput with 1,050 horsepower. They work well, in part, thanks to an MDS (metal detection system) from CBI.

“Metal is by far one of the worst things you can run through a machine. Rock is another. Depending on what it is, metal can do quite a bit of damage. This MDS isn’t a fail safe, but it definitely is a lot quicker of a reaction than an operator. This system senses when it hits the metal, shuts everything down for you, and opens everything up to let the operator inspect it,” Justin explains.

The grinders are remotely operated from the cab of the loader or excavator feeding them, which typically means it’s a one-person operation, Justin says.

“It’s not very often that we need a grounds guy anymore. It’s not necessary with the technology of the machines we are running now. There is the odd time that we do, but it’s when we’re somewhere like a mill yard doing clean up and it’s quite contaminated with steel, so we’ll have someone on the ground keeping an eye on things,” he says.

Hauling the biomass are two trucks, one International and one Western Star, both with 53-foot Titan walking floor trailer. Huska also contracts other trucks and trailers as needed, particularly when the bush-grinding site is only accessible via a challenging logging road. In the Cariboo Region, Huska contracts Cariboo Shavings for their hauling services.

From left, Pat Huska and his son, Justin, are the first and second-generation owners of Huska Holdings, a wood waste recycling company in the B.C. Interior. Photos courtesy Huska Holdings.

The Huska’s first grinding machine, a Rexworks MaxiGrind, was purchased and put to work in 1995.

Changing customers
The company runs three crews year round. In March, one was operating in the Okanagan Valley servicing the Kelowna-Okanagan area and the other two were in the Cariboo Region operating out of Williams Lake.

About half the business is still dedicated to landfill reduction, while the rest is split between mill-yard cleanup and bush grinding of logging debris. Their forestry customers include lumber mills, pellet plants and co-gen plants.

The economic downturn in 2008 proved to be a boon for the biomass industry in B.C. “A lot of sawmills were closing and they weren’t producing as much fibre for the secondary end of their industry, so the pellets and co-gens relying on that fibre to feed their plants had to start going out into the bush to grind,” Justin says.

He’s seeing that trend surface again as B.C.’s sawmills struggle to remain open with the combination of U.S. softwood lumber tariffs, less annual allowable cut, and high log costs. “There are a lot more pellet plants and more competition for the fibre. At this point they don’t have much of an option other than getting the fibre from logging debris,” Justin says.

The logging debris is typically clean aside from some dirt and rock, he says. This is ideal for co-gen plants that can burn hog fuel with a high percentage of bark. Pellet mills require a cleaner fibre to produce the fines required for pelletizing.

“They have to be really careful about their grinding. They can’t have a lot of needles or bark. So they’re really going after the dry wood like old forest fire burned wood or old beetle kill where a lot of the needles or bark are already falling off the wood. That makes a higher quality pellet for them,” Justin says.

At the landfill, Huska separates and grinds white wood – what they call dimension lumber – to a 2-inch minus product that heads to Tolko Armstrong’s co-gen plant. Yard waste at the landfill, which is leafy, grassy material, is ground and stays on site to be composted.

All told, Huska grinds around 470,000 cubic metres of fibre annually from its major clients.

Steady on
The biomass side of the wood grinding industry is undoubtedly tied to the forest products industry, but the connection thus far has been a zero-sum game.

After the forest industry’s recovery from the 2008 recession, when sawmills were once again at capacity and producing sawdust and bark for the secondary industries, many logging residual grinders found themselves out of work. Huska Holdings was fortunate, Justin says, because they could turn to their landfill wood waste recycling contracts. Customer diversity was key.

“There was a hard time for a lot of these contractors who invested a lot of time and money in wood grinding equipment – they’re not cheap,” he says. “You have to have a lot of work in order to keep your equipment busy.”

With lumber producers in B.C. once again facing uncertainty, pellet and co-gen plants are turning again to forest residuals for a secure fibre supply. “They’re realizing that they have to put some sort of program together to keep their fibre supply consistent,” Justin says.

As forest biomass ramps up, leading to new contracts for Huska, the company is looking to purchase a third grinder for its fleet.

Justin is also in the middle of taking over sole ownership of the company from his now-retired parents. “It’s a scary but exciting time,” he says. “My plan is to continue on with what we have now and also grow the business in different ways. Right now we’re looking to diversify even more. There are some other areas we could get into to keep the business going.”

What might those be? Justin’s not saying yet, but with the company’s track record for staying strong even in slow years, we’re expecting great things for Huska’s future.