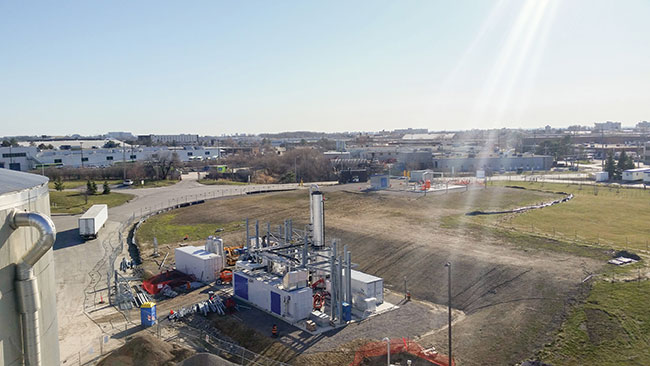 Ever wondered where your leftover food ends up? Well, in Toronto, that food waste will soon be turned into renewable natural gas (RNG).

The City of Toronto, in collaboration with Enbridge Gas Inc., is installing equipment at its Dufferin Solid Waste Management Facility, which will upgrade the biogas produced from processing food waste into RNG. Through its partnership with Enbridge, the city will be able to inject the RNG into the natural gas distribution grid and potentially use it to power its waste collection trucks, among others, as well as heat city buildings and facilities.

“It’s one of the first of its kind in North America and will allow the city to reduce its carbon footprint,” says Carlyle Khan, director of infrastructure and resources management, solid waste management services, for the City of Toronto.

The driving force behind this project? The city recognized that the Dufferin Solid Waste Management Facility was producing a waste stream, which was managed by flaring biogas. “We basically had a watershed moment where we said there has to be a better way (to manage our biogas) than flaring,” Khan says.

“Flaring is the everyday accepted common practice in terms of destroying biogas,” he continues. “But we asked ourselves, is there a way to take the biogas and convert it into something that is a more valuable and useful commodity?”

The idea to convert organic waste into RNG was first put forward in early 2014. The construction phase of the project began two to three years ago after the city spoke with Enbridge to ensure the project’s viability.

The collaboration with Enbridge was an obvious choice, Khan says.

“When we said, ‘OK, we can convert our biogas into renewable natural gas,’ the question, ‘Then what?’ was posed. The easiest way to use the RNG was to get it into the pipeline. So, that triggered us asking, ‘Who owns and who controls the pipeline and distribution grid?’ That was Enbridge,” he explains.

Enbridge is designing and installing the biogas upgrading infrastructure next to the Dufferin Organics Processing Facility (OPF), along with an injection station. Construction of the facility started in 2018 and will be complete by the third quarter of 2020. Enbridge will operate and maintain the facility for the next 15 years on behalf of the City of Toronto.

The process
On a high level, the process for turning food waste into RNG is fairly simple.

Material from Toronto’s green bin program – separated organics – is taken to the Dufferin OPF, where it is pre-processed to remove contaminants and prepare it for the next step, Khan explains. It is then fed into anaerobic digestors where, in the absence of oxygen, it breaks down and produces biogas, which is made up of approximately 60 per cent methane.

“Once the facility is up and running, the biogas collected will be sent to a biomethanization unit, where it will be cleaned and conditioned and then injected into the distribution grid as RNG,” he says.

The OPF facility will, at its core, use technology from Anaergia to process the SSO, including an Oryx press and some standard pumps, motors and centrifuges. The biogas upgrading system is designed by Xebec, and a pressure swing adsorption unit converts biogas to RNG.

Biogas is not the only product produced by processing organics. Digester solids are also created and processed into compost, Khan explains.

From the 160,000 tonnes of organic material the city collects each year, the Dufferin Organics Processing Facility manages approximately 55,000 tonnes, which can produce about 3.2 million cubic metres of RNG. This is the equivalent of taking 1,871 cars off the road, and is enough RNG to power the majority of Toronto’s waste collection fleet, which is about 170 trucks, for 90 per cent of the year.

Toronto is looking at producing RNG at a second site, the Disco Road Organics Processing Facility, which processes approximately 75,000 tonnes of material annually. It is capable of producing over 4.6 million cubic meters of RNG.

Khan and his team don’t plan on stopping there. They are looking at landfill gas to RNG potential, and have also proposed the creation of a third organics processing facility, which the Toronto city council has approved in the 2020 budget process.

Reducing carbon emissions
These organics processing facilities will not only avoid carbon emissions associated with flaring biogas, but also help offset greenhouse gas emissions from the City of Toronto’s garbage truck fleet, or any other application that the city chooses.

In order to get the optimum value out of the RNG, Toronto plans to blend it with the natural gas it purchases in order to heat city buildings and power city trucks, reducing greenhouse gas emissions, Khan says.

“It can be used anywhere there’s a pipe application, whether it be a furnace or boiler. We are hoping to use it across the city,” Khan elaborates.

Toronto recently declared a climate emergency and, as part of its TransformTO Climate Action plan, is working to reduce its greenhouse gas emissions by 30 per cent by 2020 (based on 1990 levels), by 65 per cent by 2030 and achieving net zero emissions by 2050 or sooner.

Simply not flaring the biogas will result in an avoidance of approximately 9,456 tonnes of carbon dioxide equivalent at the Dufferin site, he adds.

“We’re going to avoid emissions at the facility, and wherever the renewable natural gas goes, you’re also going to have a reduction there,” Khan says. The potential environmental impact is very large, but depends on the ultimate end use.

Economically, the city has not yet determined the impact of this project, since it also depends on how the RNG is used.

Next steps
Moving forward, the city will continue to promote its Green Bin program to divert organics from landfill, Khan says.

They will also be looking at ways to optimize their RNG yield from organics, and explore whether there are other waste streams from the process that could be recovered into a more valuable commodity.

Toronto is willing to share its experience with other cities and municipalities who are executing similar projects at waste management facilities.

These types of projects will “help us go a long way to achieve our TransformTO targets and address climate change and the climate emergency that we have,” Khan says.

“The public reaction overall has been very positive,” he adds. “I think the public and stakeholders alike see it as a positive call to action, something real that we’re doing.

“In addition, there’s a higher-level of engagement. People are starting to understand and see the connection between participating in the program, what they put into the organics, which then goes to our facilities where we’ll not only be creating renewable natural gas, but also creating environmental benefits by reducing our greenhouse gas footprint.”

In the coming years, Khan believes other municipalities or cities will also adopt this model and set up similar projects.