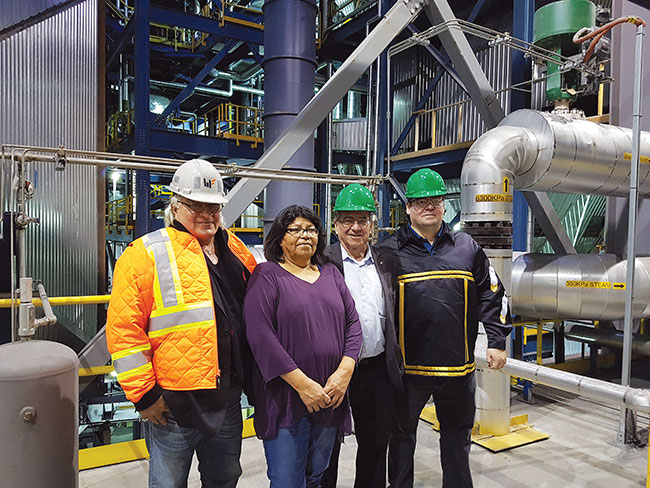 Across Canada, the forest industry is facing a problem: what to do with the low-grade fibre left in the forests after harvesting. Cogeneration plants like Hornepayne Power, based in Hornepayne, Ont., offer one solution: using residual fibre to produce electricity and steam.

The plant is a subsidiary of Hornepayne Lumber, a random-length dimensional sawmill founded by Olav and Elna Haavldsrud in 1953. The family ran the mill and the cogeneration plant until 2015, when it was shut down.

According to Dottori, the cogeneration plant was built to have a capacity of 18 megawatts (MW) per hour. But, because of transmission issues with Hydro One, and discussions with the Independent Electricity System Operator (IESO), the plant contract was reduced to eight MW per hour. This rendered the plant nonviable, given that the Haavldsruds had invested $45-$50 million into the plant. As a result, the company went into bankruptcy in 2015.

In 2016, WRC Timber, along with its three First Nations partners, bought Hornepayne Lumber and Hornepayne Power. Today, Hornepayne Power runs 24/7 and employs 22 people, and is a major consumer of biomass residuals in the region.

Approximately 70-80,000 green metric tonnes of biomass residuals come from the nearby Hornepayne Lumber sawmill. The plant buys an additional 100,000 green metric tonnes from logging contractors and sawmills in the region, including Rayonier’s Hearst, Ont., mill and White River Forest Products, based in White River, Ont. The residuals include bark and forest biomass, such as leftover tree tops.

Producing power
Despite having access to a large fibre supply and an 18 MW per hour capacity, the IESO still restricts the plant to producing 10 MW of electricity per hour, Dottori says.

Hydro One buys electricity from the plant, which goes into the grid. The plant also produces steam, which is used to power Hornepayne Lumber’s dry kiln.

The process for producing the steam and electricity is fairly straightforward.

The sawmill residuals are blown or trucked over to the cogen plant. The biomass from logging contractors usually comes in the form of poplar logs, or from ground-up forest treetops and residues, Jim Graff, boiler and operations consultant for Hornepayne Power, explains. The larger pieces go through a Peterson grinder.

Once the material is processed, it is either stored in the yard or in a large covered storage area, which can hold up to four days of fuel. Then a front-end loader mixes the fuel into a “recipe” – one-part sawdust, one-part bark, and one-part ground poplar, Graff explains.

The fibre is loaded onto a Continental Conveyor stoker reclaimer, and then onto a Belterra feed belt, which takes it up to a large hopper at the boiler. The boiler is a McBurney boiler capable of producing 150,000 lbs. of steam per hour.

An extraction valve at the end of the turbine is used to remove 50 pounds per square inch (psig) of steam, which is used for process heating in the kilns at the lumber mill.

The flue gas produced in the process goes through a tubular air heater, where Hornepayne Power can reclaim some of the combustion heat from the exhaust gases. Dust and ash particles are trapped using a PCC precipitator.

“The precipitator charges the particles negatively, and the collecting plates are positive, so they attract each other,” Graff explains. “These plates are hooked up to vibrators, so when the material collects on the plate, the plate vibrates and that material drops down into an ash discharge system.”

Meanwhile, the flue gas goes up the stack. The fly ash is removed from the boiler and goes through a conditioning system, which mixes water and ash together to make a type of dry slurry, which is landfilled in an approved site.

Overcoming challenges
Even with the conditioning system, the PCC precipitator and a dust filtering system, it is a fairly dusty environment, Graff says.

Due to the dust, the plant suffered a major shutdown recently that required a repair and rebuild of the turbine and generator. This shutdown lasted six weeks and cost the company $1.2 million, Graff says, not including what was lost in production.

“So, it was a very, very expensive failure. Now, having gone through the experience, there were a few things that should have been on the generator side of things that were never hooked up by the original owner,” he says. “We’re being proactive and installing some of the indicators that would help us prevent this type of failure. We’ve also cleaned up where the air is allowed to get in for cooling, increased the filtering system and sealed the holes that were around that area to try to prevent fly ash getting into it.”

“It’s now running beautifully, just purring, which is the way it should be,” Dottori says.

Fighting for full capacity
Now, looking ahead, Hornepayne is focused on getting the plant up to its full capacity of 18 MW per hour. The company has sent a proposal to Hydro One and the IESO to be able to produce 13 MW per hour, with the eventual goal of working up to net 16 MW per hour, Graff says.

“There’s a lot of fuel out there that needs a home; the industry needs a solution for sawmill waste and forest biomass,” he says.

Boosting production capacity at Hornepayne Power would provide a home for these types of fibre.

“The plant could do so much better and be a long-term, profitable unit for the region,” Dottori adds. “But, in addition to the restriction, we also have a time-limited 10-year contract expiring in early 2024. So, we have been negotiating intensely with the IESO and the government to provide an extension on the plant.”

Other cogeneration plants typically get a 15-20-year contract, he says. As such, Hornepayne is looking to extend their contract by at least 10 years.

Given the Ontario government’s recently released forest sector strategy, which aims to prioritize the use of low-grade fibre for the biomass and pulp and paper industries, Dottori is optimistic that the plant will be given approval to expand capacity and extend their contract.

“We’re hoping the government recognizes that the use of biomass displaces fossil fuels and is good for the regional economy as it creates a lot of jobs,” he says. “Wind power, sun power – they create some capital, but no ongoing jobs, except for repairs. This plant creates new types of jobs.”

It also has a ripple effect on the regional economy – by purchasing biomass, Hornepayne Power puts $7 million into the local economy, and keeps a lot of people working in the region, Dottori explains.

He hopes that the government will decide on the plant’s capacity and contract extension by the end of the year.

‘Tremendous potential’
Hornepayne Power is also looking at two new greenfield projects that will use the energy they produce. One of those is the production of hydrogen at the plant.

“We have signed a non-disclosure agreement with a research company that has some really interesting technology that we think would be really applicable at Hornepayne, to generate hydrogen very efficiently, and we can use up to five MW of our excess power for that,” Dottori explains. “It’s a very exciting project, and we’re working diligently on that. We hope to be able to come to a decision before the end of the year.”

Hornepayne Power is also looking at the possibility of building a greenhouse that would use the clean carbon dioxide and the warm water that the plant produces.

This would be a very economical and environmentally friendly way to grow vegetables for the region, Dottori says. The concept is based on technology currently used at cogeneration plants in Denmark.

“So, there’s tremendous potential if the government agrees to extend and increase our contract,” he says.