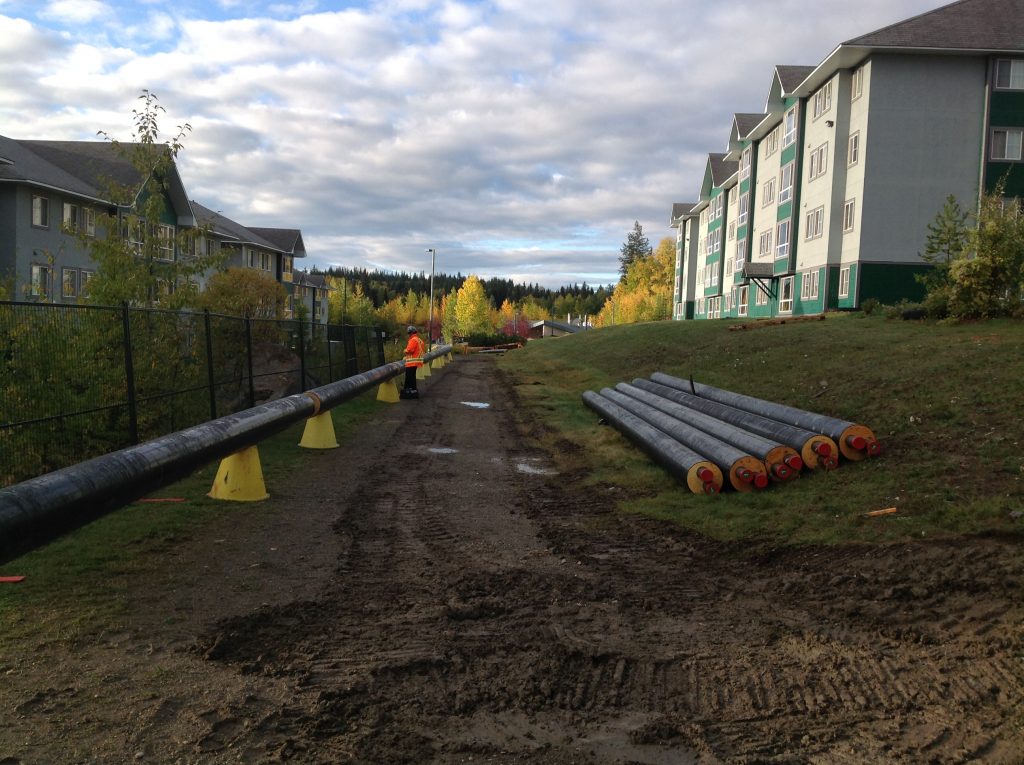 The third phase of the UNBC Energy Initiative, the Sustainable Communities Demonstration Project (SCDP), will expand the school’s existing bioenergy infrastructure through the addition of a low-temperature, hot water district energy system that will service four on-campus buildings, including two residences, the I.K. Barber Enhanced Forestry Lab, and the campus daycare.

For David Claus, the assistant facilities director of facilities management, this latest phase in the initiative represents the culmination of a longstanding vision for a university-operated renewable energy program that can also serve as a model for innovative research.

“We started in 2009 with a wood pellet boiler,” says Claus, reflecting on the program’s humble beginnings. “That pilot was quite successful and enabled us to demonstrate a couple key things: one, that the university could own and operate a wood-based heating system; and two, that the university can operate these systems and conduct research on them simultaneously.”

Installed in May 2009 at a cost of $489,000, the initial 400 kW pellet boiler was a demonstration project made possible through a funding partnership between UNBC, the Government of Canada’s Community Economic Diversification Initiative, and the Wood Pellet Association of Canada. The research and community outreach benefits of the project ultimately led to UNBC winning the prestigious Best Campus Case Study award at the Association for the Advancement of Sustainability in Higher Education’s (AASHE) 2010 Campus and Student Sustainability Awards.

Following the success of the pilot, UNBC began work on Phase 2 of their Energy Initiative, which saw the construction of the flagship Bioenergy Plant, a gasification system that converts hog waste into useable heat to produce hot water. Designed by Vancouver-based Nexterra Systems Corp., and distributed through the university’s existing hot water district heating system, the hot water produced by the project has offset roughly 85 per cent of the fossil fuels previously used to heat core campus buildings, with the plant producing the lowest particulate emissions of any bioenergy facility in North America.

Funded by the Knowledge Infrastructure Program, the Public Sector Energy Conservation Agreement, and the Innovative Clean Energy Fund at a total cost of $15.7 million, the plant achieved LEED Platinum certification in August 2013 and won the prestigious Canadian Green Building Award in June 2014.

In addition to the organizational accolades the project has received, the Bioenergy Plant has also attracted a great deal of attention among interested community stakeholders.

“At UNBC, we view our bioenergy work as having both a research mandate and an education mandate, but we also understand the importance of having a demonstration mandate,” explains Claus. “On the demonstration side, we’re trying to push the envelope, and so all of our systems are available for people to come and look at. We’ve had students and community groups and a number of other groups coming through to see what we’ve done.”

As Phase 3 of the initiative, the SCDP will use the original 400 kW pellet boiler as its primary heating supply, with peak load and back-up heat provided by the Bioenergy Plant. The boiler will be moved from its original location in the Enhanced Forestry Lab to a site beside the Bioenergy plant, and connected to a second, newly constructed district heating system. The project — with a capital cost of $2.2 million — was made possible through a funding partnership with the Government of British Columbia, TransCanada Corporation, the BC Bioenergy Network, the Omineca Beetle Action Coalition, and Pacific BioEnergy.

As with the preceding phases of their Energy Initiative, UNBC had designed the SCDP with an eye toward education and demonstration, hoping this latest project can serve as a model of sustainable energy security for Canada’s off-grid communities, many of which are located in Northern B.C.

“There are a number of communities in Northern B.C. that are looking at putting in district heating systems and biomass systems, and they’ve come to us,” says Claus. “It’s an exciting development, and a big step for us. Our university can play an important role as an independent third party who can offer information, technology, and guidance.”