April 29, 2019 – Not many people can say a bag of fibre from a biogas plant sparked the idea for their company. But Andrew White, CEO of CHAR Technologies, can. 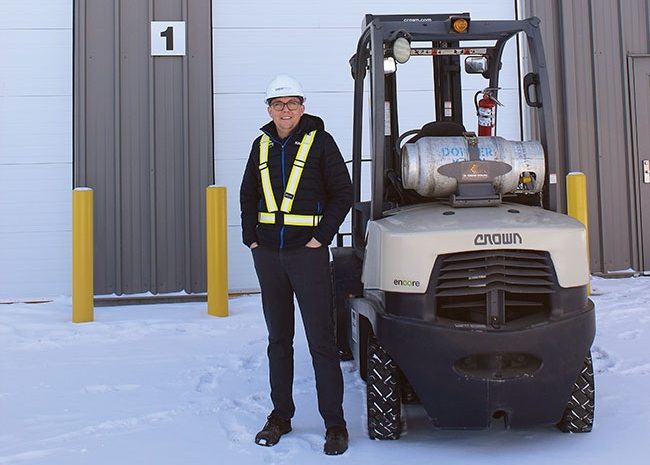 In 2009, as a masters student studying chemical engineering at the University of Toronto, White and his professor visited a biogas plant in London, Ont. that processed organic waste, manure and agricultural residues into biogas. The plant was also producing a lot of fibrous material byproduct “that didn’t have a lot of value to it,” White says.

“But they had great looking fibre so we – my professor and I – decided to take some back to the lab and see if we could turn it into activated carbon,” he explains. Their research led to the creation of one of CHAR’s biocarbon products – called SulfaCHAR – which is used to remove contaminating hydrogen sulfide from biogas.

“So, in 2011, when we saw that the research worked, that it made a product that worked, and there was a market need, we decided to start the company.”

An environmentally friendly charcoal
Biochar is a biocarbon product made by heating biomass in the absence of oxygen. “Instead of burning it as you would when you apply heat in the air, it carbonizes, so it drives off a lot of volatile material, and you’re left with basically just carbon,” White explains.

As its name suggests, biochar is similar to charcoal, but it’s much more environmentally friendly and made from different waste materials. It has multiple end uses, including as an agriculture product or soil amendment, which helps soil hold moisture and fertilizer, White explains. Since it is made from biomass, it can be used as renewable energy without giving off the same amount of greenhouse gas emissions as charcoal.

White personally believes biochar is specifically for agriculture or soil remediation, and refers to CHAR Technologies’ different products as biocarbons.

“The big difference is the quality of the product,” White says. “We drive off a lot more volatile matter, so our carbon content is higher. We’re driving off hydrogen and oxygen at those higher temperatures.”

Fast pyrolysis has a residence time of one to two seconds, and is generally used to create bio-oil.

SulfaCHAR is an activated carbon. “Think like a Brita filter for filtering water, except we use it to filter renewable natural gas,” White says. “The benefit there is traditional activated carbons are made from coal and generate a solid waste once you use them. Ours is made from organic material, and we actually generate a sulfur-rich soil amendment fertilizer when it’s done being used as a filter.”

This product is made using a blend of biosolid-based fertilizers, anaerobic digestates – the solids left over from biogas plants – and some other fibres. CHAR’s London, Ont., facility is located next to a biogas plant owned by StormFisher Environmental, and uses some of its anaerobic digestate in the production of SulfaCHAR.

“Raw” CleanFyre that hasn’t been processed yet for material properties.

“Raw” SulfaCHAR made from anaerobic digestate that has not yet been processed for additional material properties.

An indirectly fired system
The general process for turning these waste streams into SulfaCHAR and CleanFyre starts with loading “super sacks” – large bags used to transport both the feedstocks streams and the end products – into a feed hopper. The facility can process two super sacks at a time by hanging them above the feed hopper, for a total processing capacity of 750 kilograms per hour.

Then the material goes through a bucket elevator into a rotary valve, which acts like an airlock to keep oxygen out of the system – a key factor in high temperature pyrolysis. The material is then dropped into another feed hopper and is conveyed into a slow pyrolysis kiln unit through a rotating mechanism.

“The kiln unit itself is basically a large rotating cylinder that the biomass tumbles along through inside,” White explains. “We have a box around that, and inside that box is where our burners are and where we apply heat.

“It’s called an indirectly fired system because we’re heating up from the outside; we’re heating the cylinder that the material is in,” he continues. “The material then comes out the back end.”

This process produces both biocarbon and pyrolysis gas. The solid biocarbon goes into a cooling screw that includes a few quench sprays to prevent the material from reaching too high a temperature. It then goes up a cooling screw through a double dump valve – an airlock system that keeps oxygen out of the back-end – and it is then packaged into super sacks.

Currently, the pyrolysis gas is sent through a thermal oxidizer. The thermal oxidizer burns the gas, which is mainly hydrogen and carbon monoxide, as well as some light hydrocarbons and tar vapour, and turns it into carbon dioxide and water vapour. White plans to eventually clean it and use it as an energy product.

The majority of the equipment, including the kiln system, was provided and manufactured by CHAR’s partner Anergy. The partnership came about through “a fairly exhaustive search,” White says.

“Anergy spun out of Ansac, which did a lot of activated carbon regeneration, so they’ve been making these kilns for decades. So, they had a lot of good reference cases, and the pricing was very reasonable, compared to some of the American or European suppliers that we looked at.”

Anergy provided a basic set-up for the facility. Consequently, “the plant itself is about 80 per cent off the shelf,” White says. “Then we designed the key elements that we needed to make our product out of it.”

Next steps
White plans to build a larger plant within the next few years. The current demonstration facility produces a maximum of five tonnes per day.

The company’s future focus is scaling up production of CleanFyre, aiming for 20,000 tonnes a year. “With that, we’re targeting mainly the steel industry as a replacement for the pulverized coal that they’re currently putting into their blast furnaces, and we’re working with a couple of partners on bringing that realization forward,” White explains.

Although biochar is a fairly new product on the market – virtually unknown in the forest products industry until two years ago – White believes the future is bright. Rather than carve out a niche, CHAR Technologies aims its products at existing markets, such as activated carbon and energy products, which should speed up market adoption.

But there are still several challenges facing widespread adoption of biochar. The issue, in White’s opinion, is two-fold.

Initial research shows some types of biochars work better than others as an agriculture product. White believes this is because of a lack of consistency in production, testing and certification. “There are a lot of people pushing those aspects forward, and I think it just needs to happen to, again, drive the market acceptance,” he says.

Looking to the near future, “We really want to continue to grow and push the opportunities for biocarbons in general,” White says. “When we started the company, our focus was on SulfaCHAR, and now this CleanFyre, biocoal, energy product market seems to really be taking off and we’re getting a lot of great interest from the industry, so we’re focused on that.

“As we grow and develop and as the research grows and develops, I think there are a lot of different biocarbon applications that we’ll unlock, and that’s what we’re really excited about.”