Nov. 16, 2017 - After 10 years of research, U.S.-based Natural Resources Research Institute (NRRI) delivered solid results this fall. As in solid biofuels. By the ton. 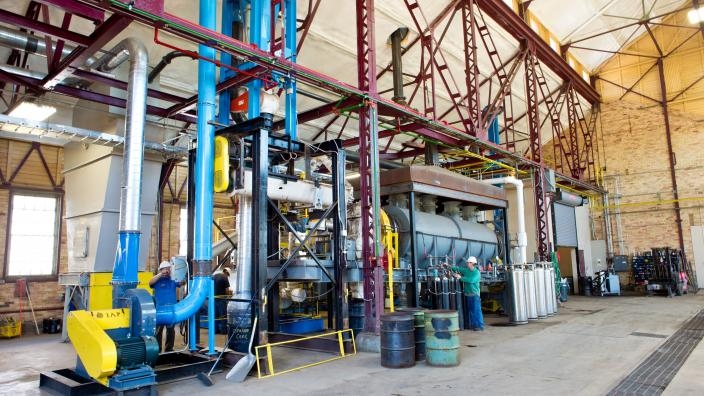 Starting at the bench scale in 2003 and fiddling with mixture after mixture, NRRI is now able to produce solid biofuels that perform at comparable energy values to coal in fossil coal-burning facilities. The biofuel emissions have no heavy metal pollutants and greatly reduced sulfur levels. As an added benefit, the biomass feedstock can be invasive plants, woody and agricultural waste, secondary wood species, and beetle-killed wood resources.

NRRI envisions this to be a supplement to fossil coal that helps reduce harmful coal emissions to meet state and federal mandates while minimizing new capital requirements at existing power and industrial plants.

“What’s really exciting, and what we’ve been working so hard on, is being able to produce this product at a commercially-relevant scale,” said Don Fosnacht, NRRI initiative director for Renewable Energy. “We had to find a way to make it physically robust and water-resistant for easy shipping and handling, and scale it up to six tons per day output. It wasn’t easy.”

The United States is moving away from fossil fuels – Oregon is the first state to aim for coal-free power by 2020 – but the transition will be slow. NRRI helped to monitor a significant trial of solid biofuel at a Portland electric plant in 2017. They completely replaced the fossil coal with 3,500 tons of biofuel with only minor mechanical changes. This trial demonstrated that this similar biofuel provides roughly 2,500 BTU per pound increase over typical output for Powder River Basin coals.

The biofuel can be made with two processes: Torrefaction (a dry roasting method) or Hydrothermal Carbonization (a pressure cooking method). NRRI’s large scale rotary kiln is best for roasting wood chips to make solid fuels. The second reactor is like a large pressure cooker that can take other plant biomass (milfoil, invasive cattails and agricultural waste) to make an “energy mud” that is formed into solid fuels.

“If you think about how Mother Nature made fossil coal, it’s time, pressure and heat,” explained NRRI Engineer Tim Hagen. “We’re doing those same processes, but instead of millions of years, we’re doing it in a few hours. And because minerals don’t get into the mix, we don’t have those potential pollutants.”

And while this is exciting progress, NRRI is already gearing up for the next steps of biofuel development. Using a high pressure gasification process on the solid fuels, they hope to demonstrate the conversion of the solid biofuel into a synthetic natural gas (sometimes called “syngas”). Other products would be high value chemicals, liquid fuels and activated carbon.

White wood pellets have made it to market as a coal alternative and they’re a large U.S. export to Europe. But unlike NRRI’s solid biofuel, white wood pellets require major infrastructure changes at the power plant including massive warehouses, and they easily break down during transport and exposure to weather.

The NRRI is a research institute established by the Minnesota state legislature within the University of Minnesota Duluth. Learn more: www.nrri.umn.edu/natural-resources-research-institute/news/rel-biofuels