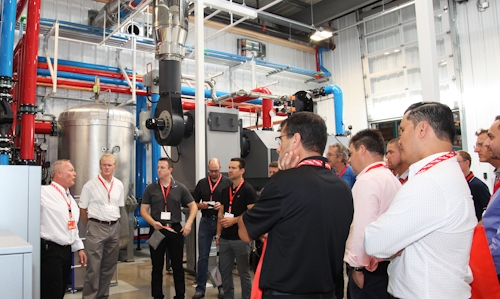 The boiler is compact and fully automated with inputs of 44 to 193 MBH and features an array of modern, state-of-the-art biomass technology. It has a wide range of applications, from residential homes and apartments, new buildings or retrofits.

Installing a commercial wood pellet-fired biomass system as its primary heating system has allowed the company to significantly decrease its facility’s carbon footprint.

“Having installed this system, which makes us virtually 100 per cent fossil fuel independent, is a move that is very much aligned with the direction that Viessmann as a company is moving towards in Germany as well,” said Arne Michalski, digital marketing projects manager for Viessmann.

“We’ve got solar panels up on the roof as well to pre-heat domestic hot water, thereby reducing the amount of energy needed to bring it up to the desired temperature,” Michalski said. “So we’re a much greener facility now than we ever were before, which is great.”

Besides becoming a greener company itself, Viessmann also wants to teach others about the benefits of using biomass.

“We need to educate, we need to train people on how to use biomass again,” said Andreas Wintzer, Viessmann’s manager of commercial and biomass systems. “We haven’t done biomass in Ontario for 30 years.”

Industry members should work together to advocate for biomass and to educate the market, Michalski said. “There’s this big education gap about what biomass is, what it does, how it works, whether it’s safe, and what it can do.”

“What we have here is demonstrating to people, this is what biomass is. It’s live, it’s firing. We’ve got data hooked up that tells us the emission levels,” he explained.

“Over the next couple of years we’ll be able to look back and see how many tons of CO2 were saved by having this equipment running for this time, so we’ll have a benchmark to compare to.”