News
Waste not: BC city cleaning up with garbage-fuelled garbage trucks

May 28, 2018 - I’m a pretty average Canadian, I think. I work Monday to Friday, 9-5, in a medium-sized city, and every spring I pay what feels like a lot of taxes. I respect that the climate is changing, but I’m far from living plastic-free off the grid. I try to recycle when I can, and feel an appropriate stab of guilt when I throw things away. 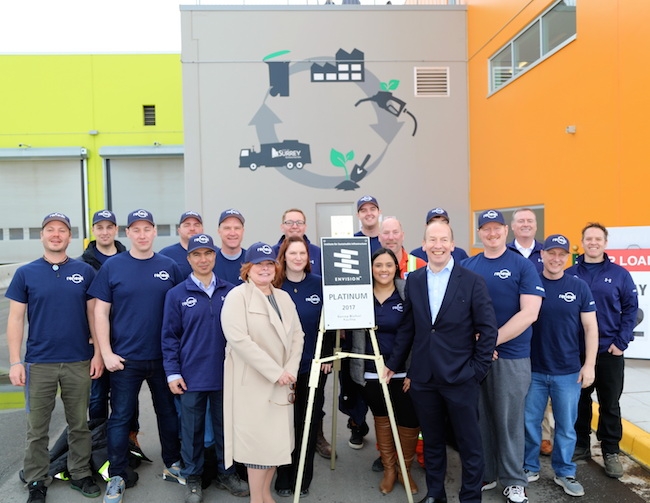 Us average Canadians know we should probably be doing more, but we don’t want to compromise our lifestyle to do it. So one of two things needs to happen in order for things to change: either the government steps in to force change, or science and technology offer solutions.

Lately the federal government has been doing its part. Both the national carbon tax and the clean fuel standard are set to make historic changes to carbon pollution produced in Canada. As I’ve mentioned before and as many readers are aware, this will have a big impact on the Canadian bioeconomy and should spur growth over the next few years.

It’s a terrific solution to waste collection and processing that involves little to no effort from the average citizen in Surrey.

“It’s really an amazing example of what a circular economy is,” Michael Leopold, general manager of Renewi Canada – the company that designed the facility – told Canadian Biomass contributor Lesley Allan. “The trucks are picking up waste, but they’re picking up waste that will ultimately fuel them on a daily basis.”

The state-of-the-art anaerobic digestion facility has two waste streams to effectively treat wet and dry waste separately. It also uses impressive technologies such as water scrubbing to remove CO2 and other impurities from the biogas, and an odour abatement system that includes several steps to remove ammonia. Read the full feature story here.

Best of all (for Surrey taxpayers), the $68-million facility was built without any expense to ratepayers. Funding came from the federal government’s Public-Private Partnership program, the P3 Canada Fund.

It’s such an effortless solution for taxpayers. Life goes on uncompromised. Once a week, bleary-eyed Surrey citizens wake up early to drag out their trashcans to the curb for the umpteenth time. But perhaps now the weekly routine is carried out with a hint of pride, knowing their black bags are heading to a processing facility rather than a landfill, brought there by trucks fuelled by the very trash they’re collecting.

Congratulations to the City of Surrey for leading the way with this progressive facility. Let’s hope science continues to forge the path to a greener Canada.