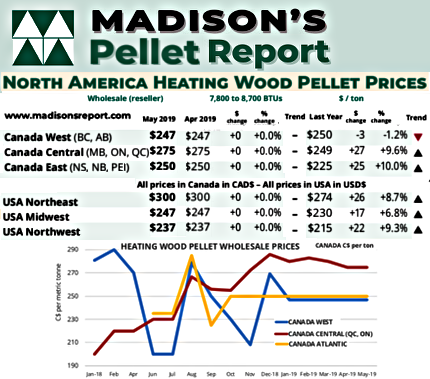 The latest short-term energy outlook from the US Energy Information Administration (EIA) predicts energy provided by non-hydropower renewable sources in the U.S. will continue to increase in the remainder of 2019 and into 2020. Non-hydropower renewables, including biomass, provided 10 per cent of electricity generation in the U.S. in 2018, with that proportion expected to rise to 11 per cent in 2019 and 13 per cent in 2020.

While the vast majority of pellets produced in the U.S. are exported to energy markets in the United Kingdom and other European countries, in 2018 wood biomass was used to generate 113,000 MWh of electricity per day in the U.S. Electricity production from wood biomass is expected to be flat this year at 113,000 MWh per day before increasing in 2020 to 115,000 MWh per day.

Biomass capacity in the electric power sector is expected to follow a similarly decreasing pattern in the near future, with capacity dropping from 7,151 MW in 2018 to a projected 7,071 MW in 2019 before falling further to 7,052 MW in 2020.

As British Columbia lumber manufacturers adjust production volumes in an effort to buoy prices, the price of sawmill residue in British Columbia will be affected. Indeed, significant manufacturing curtailments at so many of the major sawmills in British Columbia over March and April, then again in June, as well as several announcements of permanent closures, took enough capacity offline for lumber prices in early June to jump up +20 per cent. This is, however, still only a partial recovery from the drops since the admittedly record-highs of this time last year. 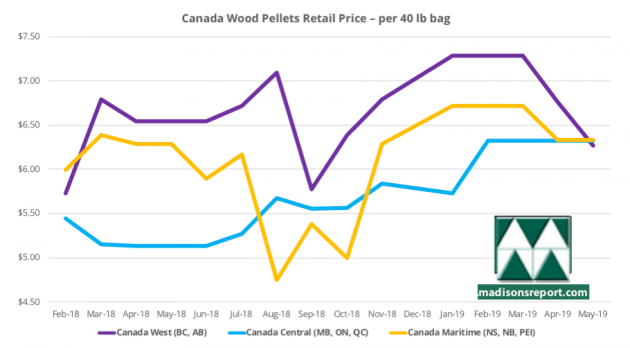