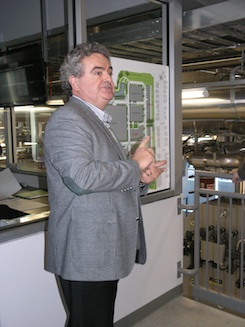 November 28, 2012, Quebec, QC - The 2012 AGM of the Wood Pellet Association of Canada is underway today in Quebec City, and the key focus is on trends in export energy markets, and what they mean for Canadian pellet producers.

The meeting started
with a tour of the Cité
Verte urban district heating project Tuesday afternoon and a reception at the host
Chateau Laurier Hotel in Old Quebec (see full report on this project here).
The tour was led by Claude Routhier, president of Poly-Energie, and a driving force behind this green city project. The 800-unit apartment block and commercial centre is heated 100 percent by four Viessmann biomass boilers in a pilot project partly funded by Hydro Quebec and Natural Resources Canada. The goal is to create an example and working data base for others to emulate. The company's next project involves individual pellet heating systems in semi-detached ski lodge housing near Quebec City.

Even the reception was educational, as several Italian
pellet brokers explained the product needs of the growing Italian pellet
consumer base over some good wine. For starters they need to be low ash – 0.5
percent or less – so opportunities for all but white wood bagged pellets are
limited. And apparently there is a fear of Russian pellets, as they
may be radioactive! For once irrational consumer behavior is on the Canadian
pellet producers' side. Either way, the presence of so many Italian pellet
brokers at this small meeting bodes well for bagged pellet producers here. If
you have access to extra wood shavings for horse bedding, give us a call as
well – there is a welcome market.

We also learned from Canadian Biofuels president Ian
Moncrieff that his Ontario plant is set to double production by adding a
second pellet mill in the very near future. Not coincidentally, the plant
serves the Italian bagged market with much of its production. Many thanks to Joanne Turnell of Andritz for helping to organize both the tour
and reception.

The conference kicked off this morning with overviews of the
Canadian and international wood pellet scene from WPAC chair Robert Tarcon and
executive director Gordon Murray. According to Murray, the EU still represents 84 percent of global pellet consumption, with the US responsible for another 12 percent. Canada, despite our climate, accounts for just 1 percent. More importantly, the UK is now responsible for some 50 percent of North American exports, a number that both Murray and other experts at the AGM expect to see grow at a significant pace.

A little less rewarding has been market growth in Japan and South Korea, where strong renewable fuels mandates for power producers have yet to translate into pellet consumption. Murray explained that South Korea's reluctance has to do with a preference for buying short-term contracts via a bid process versus the Canadian penchant for long-term, fixed price contracts. While WPAC believes this will sort itself over time, a later speaker, Arnold Dale of the Ekman Group based out of Riga, feels Canadian producers will have to adjust to Korea's way of doing business if they wish to see success in that market.

In the case of Japan, despite regulations to replace nuclear with biomass, an active chip market and a fleet of fluidized bed boilers able to process them has been an impediment to pellet sales so far.

On the domestic market, Murray expects great things from the recently-announced federal coal-powered generating emission regulations. By capping emissions at 420 tonnes of CO2 per GHh starting in 2015 versus the current 1050 average, Murray expects a market of 5.5 million tonnes to develop by 2019. "When you consider that we are currently producing less than 2 million tonnes, we are looking at almost tripling our production level just for the domestic market," he explained. With luck Canada's sawmill sector will ramp up at the same time to supply a large chunk of this fibre via sawmill and logging residuals.

That will be welcome news for eastern Canadian pellet producers in particular, as both Murray and Quebec Wood Export Bureau (QWEB) director Pierre-Olivier Morency mentioned that they are currently running at less than 50 percent capacity. As part of a move to improve that rate, WPAC and QWEB are working with NRCan on a logistics study for Eastern Canada, with a report and action plan due in the spring of 2013. The goal is to find efficiencies required to move more than the current 120,000 tonnes out of Eastern Canada to Europe.

Drop by later this afternoon for more pellet export market
intelligence from the WPAC 2012 AGM, or follow us on Twitter @canadianbiomass
or at #WPAC12.