Feb. 19, 2019 - At the Wood Pellet Association of Canada (WPAC), we advocate on behalf of our membership. Here are some of our recent activities: 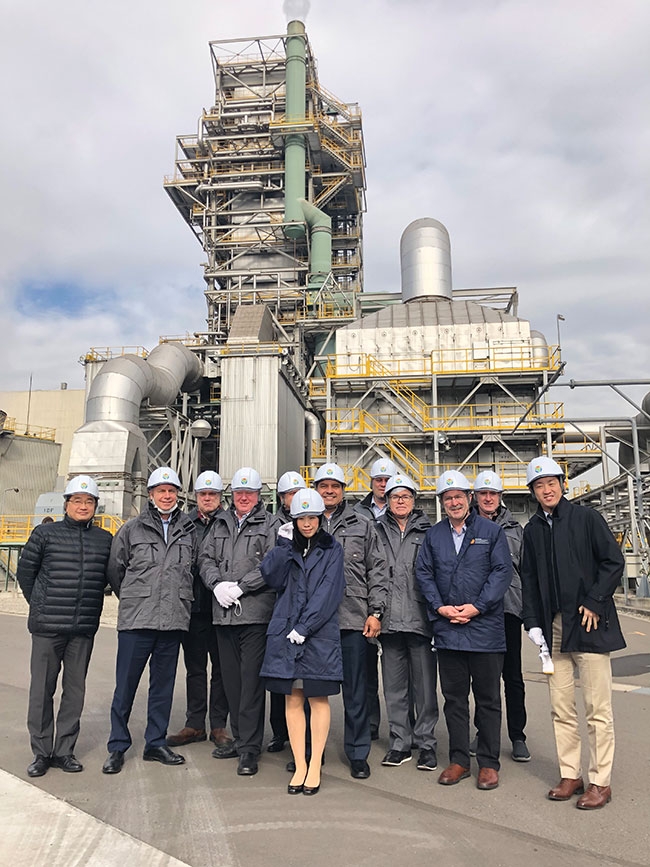 Representatives from WPAC At the Wood Pellet Association of Canada (WPAC)

During 2019, WPAC is planning to co-operate with the Quebec Wood Export Bureau on a comprehensive Canadian wood pellet market study for our membership. We will involve members in designing the study.

Safety session during European Pellet Council general assembly
WPAC’s Safety Committee includes members from most Canadian wood pellet producers. Since 2014 we have made remarkable progress in making our industry safer and improving our relationship with safety regulators.

One of our recent goals has been to collaborate with other international wood pellet trade associations on the topic of safety. To that end, on Nov. 15, I, along with Scott Bax, senior vice-president of operations for Pinnacle Renewable Energy, led a safety session during the European Pellet Council’s general assembly in Hanover, Germany. The session featured presentations and videos on the Canadian wood pellet safety journey and a workshop and quiz on the topic of combustible dust mitigation. We used a combustible dust video produced by WorkSafeBC, which, due to popular demand, was subsequently translated into German by WorkSafeBC for distribution to a European audience.

The Committee invited WPAC to present on the topic of clean growth and climate change in Canada. On Dec. 11, I discussed the global and Canadian wood pellet industry, the nature of our raw material supply, our growing exports, and how, with more regulatory support, our industry could play a greater role in reducing Canada’s GHG emissions – both in repowering coal power plants and in domestic and commercial heating – and in doing so, provide even more well-paying jobs, especially in rural areas.

WPAC in Japan
I visited Japan in early January this year as part of a delegation with representatives of Pinnacle Renewable Energy, Pacific BioEnergy, and Canadian National Railway (CN). Our group included Jean-Jacques Ruest, CEO of CN. Our purpose was to reassure our Japanese customers of CN’s commitment to providing timely and reliable transportation from Canadian pellet plants to Western Canadian ports. Japanese power plants must have confidence that Canadian pellet producers can meet their contract supply obligations. Our agenda included a visit to Showa Shell’s Keihin Biomass Power Plant in Kawasaki and a seminar and dinner at the Canadian embassy attended by senior representatives from 25 Japanese customers, including trading houses, independent biomass power plants, and coal power plants that are co-firing with wood pellets.

Our wood pellet delegation also met with the Japanese Ministry of Economy, Trade and Industry (METI) to discuss Canadian wood pellet supply and sustainability. We have invited METI to visit Canada to see our industry first hand.

WPAC meets with JCOAL
On Jan. 10, I met with the Japan Coal Energy Center (JCOAL) in Tokyo. JCOAL is a trade association and research organization with 172 industrial members – including pellet customers Sumitomo, Mitsubishi, Kansai Power, and Osaka Gas, among others – and is supervised by METI.

Doubt is beginning to emerge in Japan about the future role of nuclear energy, following the Fukushima disaster. Public opinion has remained solidly opposed to nuclear power. Consequently, the Japanese government believes the country may need to rely on a greater proportion of thermal energy than previously believed. Since this will mean continued reliance on coal, METI is now considering options for mitigating GHG emissions. METI has instructed JCOAL to investigate the potential for increasing the proportion of biomass co-firing and is focusing on Canada as a supply source. To this end, WPAC hosted a visit by JCOAL to Canada during the week of Jan. 28. We visited the University of British Columbia, Canadian pellet plants, port facilities and met with academics, B.C. government representatives from forests and trade, Canadian pellet producers, and transportation companies.

As executive director of WPAC, I am often so preoccupied with organizing and implementing advocacy efforts on behalf of our membership that I don’t take sufficient time to report back to our membership. All these activities are essential for the growth and prosperity of the Canadian wood pellet industry. I encourage members to contact me for more information and for copies of all reports and presentations.