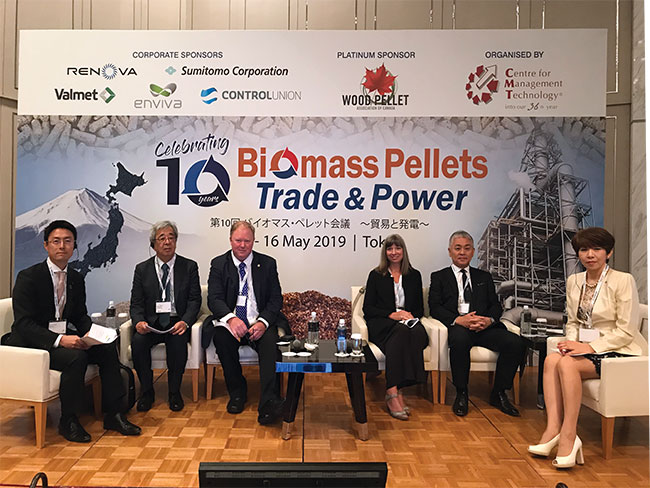 As WPAC’s executive director, I prepare a business plan and budget each year for approval by our board of directors and membership during our AGM. The business plan guides our direction for the ensuing year. Of course, from time to time, unforeseen priorities arise, and we need to adapt.

Key business plan priority areas for 2019 included advocacy and market support, safety, and research and technical development. Here is a progress report of our efforts so far this year:

Advocacy in Japan and Europe
In January, we took JJ Ruest, CEO of CN, and other senior company executives to Japan. We visited the Keihin Biomass Power Plant and met with our Japanese customers and other participants in the wood pellet supply chain. WPAC met with the Japanese Ministry of Economy, Trade and Industry (METI) and also began co-operating with JCOAL, a Japanese joint industry-government research study, to justify a seismic increase in wood pellet consumption by Japanese coal power plants. We took JCOAL representatives on tours in B.C. to educate them about our industry and to meet with government and pellet sector representatives.

In May, WPAC sponsored the annual CMT Biomass Pellet Trade and Power Conference in Japan. We were accompanied by Diane Nicholls, assistant deputy minister and chief forester of the province of British Columbia. WPAC helped set the conference agenda, providing seven speakers. We also visited the Sakata Biomass Power Station that uses Canadian wood pellets. We met again with METI and JCOAL.

Meanwhile, in Europe, I am continuing to participate as a board director of both the European Pellet Council and Bioenergy Europe trade associations. WPAC also supplied speakers for the European Pellet Conference in Wels, Austria and the Argus Biomass Conference in London. Presentations were intended to reinforce Canada’s reputation as a reliable supplier of high-quality, sustainably-produced wood pellets.

WPAC has also made progress on the project to harmonize European and Canadian boiler pressure standards. We’ve met with European boiler manufacturers and national and European trade associations to formulate strategy. Through the Austrian Boiler Association, we have submitted a CETA complaint to the European Commission that is now on the agenda for the November meetings between Canada and the EU. We have met with the Canadian Standards Association and joined their boiler standards committee. And we have had significant correspondence and many conversations with Canadian government representatives about this issue.

Advocacy at home
At home in Canada, WPAC has raised external funding and begun work on a Canadian wood pellet market study. We will be carrying out another social media campaign in the fall.

WPAC is also participating on the Canadian Clean Fuel Standard Technical Committee and the Solid Fuels Subcommittee in an attempt to ensure that wood pellets are properly integrated into Canada’s proposed Clean Fuel Standard regulatory framework. A main issue for us is the proposed framework does not provide for the generation of carbon credits for fuel switching between heating oil and wood pellets.

In June, WPAC travelled to New Brunswick to lobby for a change to an RFP for a boiler for the City of Moncton to allow for wood pellets. We succeeded in delaying the RFP and in gaining approval for one boiler to be specified for pellets.

SBP reform
WPAC has continued to be engaged in the governance reform of the Sustainable Biomass Program (SBP). WPAC president Vaughan Bassett has joined the board of directors, while I have been appointed as a member of SBP’s standards committee. WPAC will host the next round of SBP meetings in the fall when we will be visiting forest operations, sawmills and pellet plants in B.C.’s southern interior.

We are also working on SBP regional risk assessments for B.C. and New Brunswick. When those provinces are complete, Nova Scotia and Alberta will be next. WPAC is making progress on a computer information system to manage the wood pellet chain of custody through Westview and Fiberco terminals in compliance with PEFC and SBP.

Promoting safety
In January, WPAC prepared and publicly released a 2019 safety work plan. Since then, we have held monthly safety committee conference calls as we implement the work plan and monitor progress.

WPAC’s safety committee’s work has gained an international reputation. In February we accepted an invitation to give presentations on the Canadian wood pellet safety journey and on combustible dust management at the Nordic Pellet Conference in Sweden.

WPAC also planned and executed a workshop on silo fire prevention and response in February and the Wood Products Safety Summit in June. In June, the safety committee also met with WorkSafeBC for one of our biannual sector safety performance reviews.

Research and technical development
On April 1, Dr. Fahimeh Yazdan Panah replaced director of research and technical development, Staffan Melin. Fahimeh has continued WPAC’s participation with ISO Technical Committee 238 on developing international standards for mechanical and chemical testing and the safe handling of wood pellets. Fahimeh has also started a new research project in response to concerns expressed by the Maritime Safety Committee of the International Marine Organization, which involves examining potential conditions under which wood pellet off-gassing may become flammable and thus hazardous to ocean shipping.

Finally, WPAC and the University of British Columbia Biomass and Bioenergy Research Group successfully applied to Agriculture and Agrifoods Canada for $1.8 million in funding over four years to research biomass densification issues.

2019 AGM and Conference
We are looking forward to this year’s AGM and conference, which will be held at the National Arts Centre in Ottawa during the week of Sept. 22. We are including a golf tournament, pre-conference workshops on quality and sustainability certification, as well as biomass research; a two-day conference, the AGM and a board meeting; and a two-day tour of pellet plants, sawmills, forests, and port facilities in New Brunswick. You won’t want to miss our opening party, featuring Nova Scotian sisters Cassie and Maggie MacDonald’s blend of traditional and Celtic music. It’s going to be fun! I hope to see you all there!

Related
Pulling out of Paris: The effect on the U.S. wood pellet industry
Pellet plant safety takes centre stage in Prince George
Reaching new markets and doing it safely
Government and industry to intersect at WPAC 2019