Jan. 24, 2017 - We can now be cautiously optimistic that prospects for Canadian wood pellet producers are beginning to improve as we have now entered 2017. 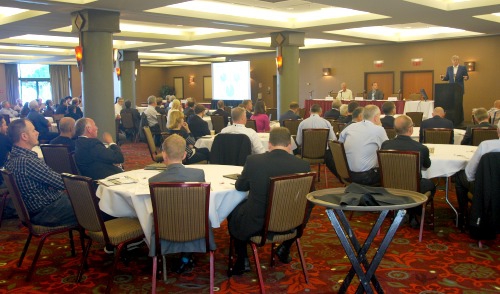 In Europe, industrial spot prices are beginning to firm amid reports of low pellet inventories and reports of pellets being diverted into the residential heating market originally destined for industrial end-users. Below-average temperatures are buoying residential pellet demand. At the recent Central European Biomass Conference in Graz, buyers were saying that it is becoming difficult to procure European industrial or residential pellets for immediate delivery. Premium pellet shortages in Italy, Austria, Germany, France and Spain have tightened supply across the continent. Increased residential market demand in Spain and Portugal has soaked up a lot of supply from Portuguese producers.

In Asia, spot wood pellet prices are slowly trending in the right direction as firmer demand has tightened available supply in the region. Although the bulk of wood pellets sought by South Korean utilities come from Vietnam, recent flash floods in south Thailand, where many wood pellet mills are based, contributed partially to a shortage of pellets in the Asia-Pacific region.

WPAC, together with its partner Quebec Wood Export Bureau, will hold a training seminar for ENplus and CANplus quality certification on March 30 in Montreal. This event is intended for new program entrants and for quality managers from certified producers who are required to attend external training at least once a year. This is especially timely in light of strong export demand for residential pellets.

Final figures have not yet been collected by the Global Trade Atlas (GTA) from national statistics agencies of producing countries for 2016 exports. Various countries have reported up to the end of October or November. I have forecasted the final figures for several countries of interest in the table below using data from GTA. 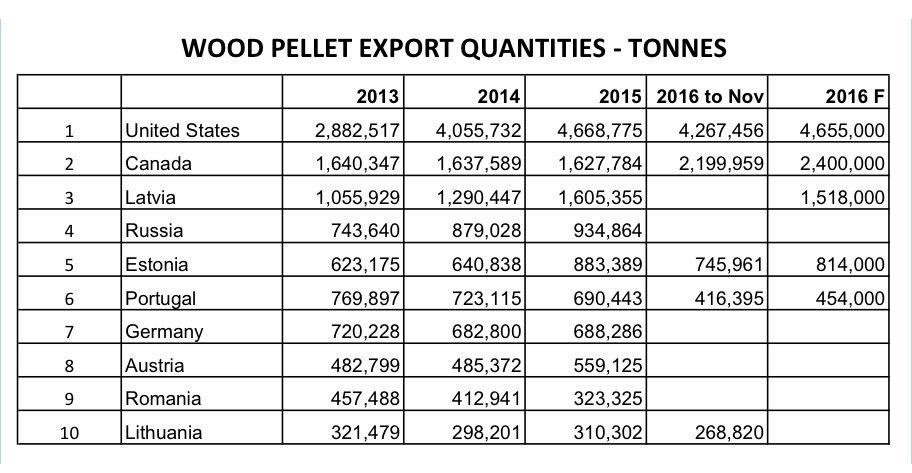 Notably, the United States will likely end up at the same figure as 2015, while Latvia will show a slight decrease from the previous year. Canada, on the other hand, will end up with a whopping year over year increase of 770,000 tonnes or 47 per cent – partially the fruit of three new plants in BC (Tolko/Pinnacle and Canfor) and two in Ontario (Rentech). This is the first Canadian increase in wood pellet exports since 2013.

Remarkably, despite exporting about 85 per cent national wood pellet production, Canada has been importing small quantities of wood pellets. For the past three years, we have imported more than 20,000 tonnes from the United States, which is all the more remarkable considering a 30 per cent foreign exchange disadvantage with Canada. And Canada has imported 7,000-8,000 tonnes of black pellets from Norway for consumption by Ontario Power Generation at its Thunder Bay power plant.

I, along with Canadian trade commissioner Judith Baguley, met with officials from the Dutch Ministry of Economic Affairs on January 16. Here is the most recent situation:

The situation in the UK is also developing.

As WPAC’s executive director, I, together with representatives of USIPA and AEBIOM, attended the December 8 board meeting of the Sustainable Biomass Program. Producers continued to be frustrated by SBP’s unwillingness to allow the pellet producers to participate in the governance of SBP. However, SBP’s board has asked CEO Carsten Huljus to draft a recommendation for transition to a multi stakeholder model that could eventually allow for producer and NGO participation. Canadian producers also continue to be frustrated by SBP’s lack of progress in approving Canadian certifications. We have producers who have been audited more than a year ago, and who have even completed annual surveillance audits, that have yet to receive a response from SBP regarding certification.

WPAC is planning to hold its 2017 AGM and Conference in Ottawa on September 18-20. This year we are co-producing our event in cooperation with IEA Bioenergy Task 32. On September 18, we will hold the AGM, followed by a tour of Lauzon’s pellet plant and several biomass heating installations … and that evening we will have a party to celebrate Canada’s 150 birthday! On September 19, in light of the Government of Canada’s recent announcement that the country will phase out coal power, we will focus on wood pellet co-firing and dedicated firing. On the 20th we will focus on domestic heat. We will invite the Minister of Natural Resources and key personnel from Natural Resources Canada, Global Affairs Canada, and Environment and Climate Change Canada.

We are planning to arrange a two-day post conference visit to Thunder Bay and Atikokan to tour OPG’s biomass power plants and hopefully local pellet plants. More information will be coming soon!