July 18, 2018 - WPAC had a busy week in the United Kingdom during the week of April 16 to 20. We attended two meetings with the UK government, we participated in the annual Argus Biomass 2018 conference, and a group of WPAC members visited Drax Power Station at Selby and Associated British Ports at Immingham. Immingham is one of four UK ports where Canadian wood pellets are unloaded on their way to Drax. The others are the Ports of Tyne, Hull, and Liverpool. 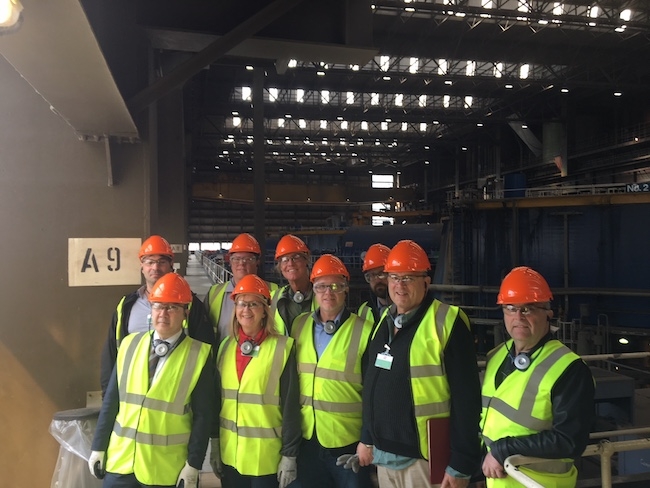 UK government meetings
On April 16, I, together with Wendy Vasbinder, senior trade policy advisor at Natural Resources Canada and Rachel Soares, trade commissioner at the High Commission of Canada to the UK, attended meetings with the UK Department of Business, Energy, and Industrial Strategy (BEIS), and with the UK Committee on Climate Change (CCC). In both meetings our objective was to emphasize the importance of Canada-UK pellet trade and to share information regarding Canadian sustainable forest management.

BEIS is the key department for biomass, covering the entire energy sector. It is responsible for the oversight of the private sector in a general sense and for the energy sector in particular, which includes designing and administering market frameworks and subsidies, with significant interventions from the treasury and No. 10 Downing Street. BEIS’s responsibilities include energy, climate change and clean growth. Of particular interest to WPAC, BEIS manages UK policy and legislation regarding support programs for biomass power and biomass sustainability requirements. We met with Siobhan Sherry, head of biomass, and Paul Willman, senior policy advisor, biomass.

CCC is the UK government’s official advisor on climate change. It is charged with analysing the scientific, technological and policy data and to make recommendations that form five-year carbon budgets, allowing the UK to meet its internationally binding targets on climate emissions. CCC is carrying out a 12-month review of bioenergy and plans to release a report in late 2018. We met with Jenny Hill, head of buildings, industry and bioenergy and Sam Friggens, bioenergy policy analyst.

There was significant discussion of global markets during the conference. Key takeaways are as follows.

• By February 2018, the Argus 90-day spot market had recovered to $180/tonne CIF ARA from its February 2017 low of $115.
• Top wood pellet importing countries in 2017 were the UK – 6.8 million tonnes (MT); Denmark – 2.6 MT; South Korea – 2.4 MT; and Belgium 870,000 tonnes (KT).
• Expected annual consumption in the UK is: Drax – 7.5 MT; EPH – 1.6 MT; and MGT Power – 1.2 MT.
• In Belgium, the Max Green Power Plant received a five-year extension. Max Green will consume 800 KT per year and Les Awirs will consume 200 KT per year.
• The Netherlands has four biomass conversion projects set to come online soon: RWE’s Amer 9 – consuming 1.8 MT per year; Uniper’s MPP3 – consuming 250 KT per year; RWE’s Eemshaven – consuming 830 KT per year; and Engie’s Rotterdam power station – consuming 550 KT per year.
• In Denmark, Orsted’s Avedore 1 and 2 will consume 1.2 KT per year; its Studstrup power plant will consume 600 KT per year; its Herning power plant will consume 50 KT per year, and Hofor’s Amager power plant will consume 350 KT per year.
• Total European pellet power capacity should reach about 8,000 MW by 2020.
• The European wood pellet heating market has grown from about 9 MT in 2013 to 13 MT in 2017.
• The top five European pellet heat-consuming countries are Italy, Denmark, Germany, Sweden, and France.
• The top wood pellet exporting countries in 2017 were the United States – 5.2 MT; Canada – 2.4 MT; Latvia 1.6 MT; Vietnam – 1.5 MT; Estonia – 1.3 MT; and Russia – 1.4 MT.
• Europe’s industrial wood pellet demand is likely to reach 16 MT by 2021, which will match installed production capacity in the US, Canada, the Baltics, and Portugal. This does not account for Asian demand, implying that there could be a wood pellet shortfall by then.
• South Korea imported 2.4 MT in 2017 including 1.5 MT from Vietnam, 400 KT from Malaysia, 180 KT from Canada, 100 KT from Russia, and the remainder from Indonesia, Thailand, and others.
• Japan imported 500 KT from all countries in 2017 with Canada holding a 70 per cent market share.
• Notably, the U.S. has been almost completely absent from the Asian wood pellet trade so far. In Japan, Enviva has advocated for the upgrading of port unloading facilities to be able to handle larger vessels so as to reduce transportation costs from the Southeast United States. However, Japanese biomass power plants tend to be smaller than in Europe, and more suited to handling smaller shipments.

Visit to Drax Power Station and British Ports
WPAC took a group of 10 members to visit Drax and the Port of Immingham on April 20. Drax is an extraordinarily important customer for Canadian wood pellet producers. In 2017, of the 2.4 MT of pellets exported by Canada, 1.5 MT or 62 per cent were sent to Drax.

Drax Power Station is the biggest single site renewable generator in the UK and the largest decarbonisation project in Europe. Located near Selby, North Yorkshire, it is connected directly into the national electricity distribution grid and has a capacity of 3,906 MW.

It supplies six per cent of the country’s electricity needs, including 15 per cent of its renewable power, and a host of system support services. Three of its six power generation units have been upgraded from burning coal to use wood pellets, of which about 22 per cent are sourced from Canada. A fourth coal unit is presently being converted to use pellets and is expected to be online later in 2018.

The Port of Immingham is the UK’s largest port by tonnage, handling 55 MT of cargo per year. ABP’s wood pellet handling facilities include two ship unloaders, eight 25,000 tonne storage silos and a rail-loading facility. In July 2018, ABP received its first Panamax-class vessel carrying almost 60,000 tonnes of pellets from Pinnacle’s Westview Terminal in Prince Rupert, which at that time was the world’s largest single shipment. The port now receives such vessels regularly. The Immingham wood pellet terminal was designed to handle about six million tonnes pellets per annum with the unloaders in almost constant operation.

Recently in Canada we have expressed significant excitement about the growth of our wood pellet trade with Asia. However, it is important not to lose sight of the incredible importance of the UK market, and especially Drax Power, to Canada’s wood pellet industry.