May 15, 2018 - WPAC participated on a wood pellet trade mission to Italy from Feb.19–23. This mission was organized by Ralph Spaans, secondary wood product specialist with the Ontario Ministry of Natural Resources and Forestry; Patrizia Giuliotti, trade commissioner for the Embassy of Canada to Italy; and myself. There were 16 participants including representatives of wood pellet producers from B.C., Ontario, New Brunswick, and Nova Scotia; Ontario First Nations; banking and finance; and certification/inspection companies. 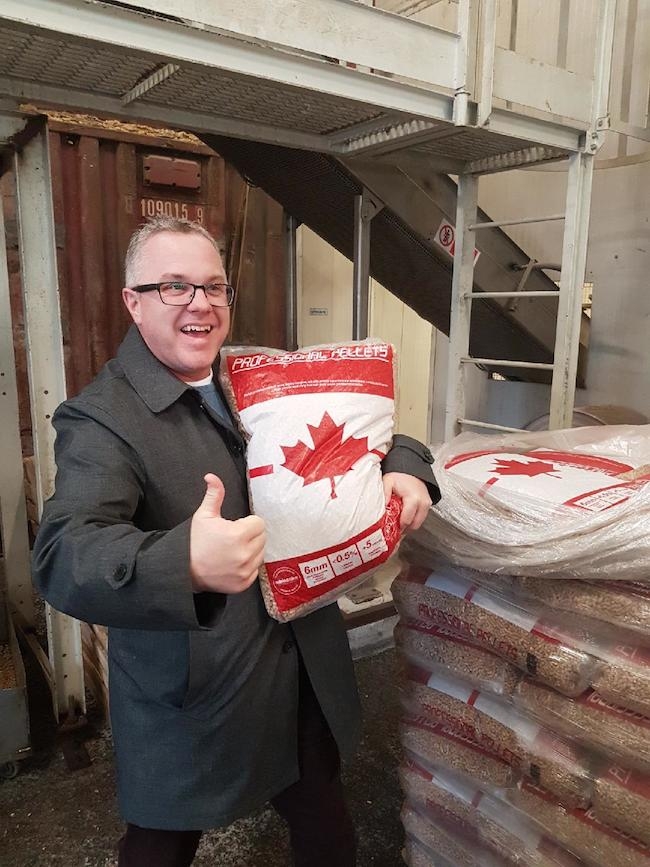 The group began the tour in Milan on Feb. 19. Travelling by bus, we first visited the municipality of Bulciago, north of Milan, where we met with the wood pellet trading companies Woodtech and Agrifor. We next visited Savichem in Fontana Fredda. Savichem is a major distributor of stoves and fuels. Savichem imports ENplus wood pellets, mainly from Austria. Then we travelled to Ravenna, where we met with Italy’s largest wood pellet importer, Adriacoke. We toured Adriacoke’s wood pellet bagging facilities and learned that the company is planning to install its own pelletizer to process fines generated from the handling of bulk wood pellets. Next on the agenda was Sitta Group in San Giovanni al Natisone. Sitta Group is a major Italian manufacturer of baby furniture and accessories. The company began manufacturing wood pellets using sawdust from its manufacturing operations, then branched out to include wood pellet importing and distribution.

The group ended the tour with a two-day visit to the Progetto Fuoco (Project Fire) exhibition where participants met with numerous pellet buyers. Progetto Fuoco is a huge event held every second year in Verona. It features seven large exhibition halls with hundreds of pellet producers, traders, and manufacturers of stoves, boilers, pellet barbeques, pizza ovens, and every other kind of wood pellet appliance imaginable.

There were several key takeaways from the Italian mission:

• Italy experienced three warm winters in a row from 2014–2016, which temporarily slowed pellet demand in the country. For the past two winters, temperatures have normalized, enabling pellet demand to recover.

• Industry participants were not able to give a precise figure for the size of Italian wood pellet market. Annual consumption is estimated to be between 2.5 and 3 million tonnes and is expected to double over the next five years. Presently about 90 per cent of wood pellets are imported.

• The Italian wood pellet market is extremely fragmented. There are hundreds of brands available. Adriacoke, who is the largest distributor, handles only 140 thousand tonnes annually, which is only about five per cent market share.

• There is significant concern about the size of the wood pellet black market, which is estimated to be between 200,000 and 300,000 tonnes per year. Participants use the black market to avoid a punishing 22 per cent value-added tax on wood pellets.

• The 22 per cent value-added tax was imposed in 2014, decreasing the advantage of wood pellets over natural gas. Nevertheless, wood pellets continue to be cheaper than gas.

• Wood pellet demand has grown in other parts of Europe, making it more difficult for Italy to import wood pellets from countries that have grown their own domestic markets. This has led to increased interest in residential-quality pellets from Canada.

• Wood pellet traders realize that they must purchase pellets year-round in order to maintain reliable supply. Traders indicate that they are willing to set prices annually to match the practice of the large supermarket chains that sell wood pellets to end consumers.

• Although Italian traders purchase wood pellets in bulk and in bags, they prefer bagged product because logistics are easier and because bulk pellets result in significant quantities of fine dust that must be disposed of.

• There are around 3.1 million installed wood pellet stoves in Italy and 12,000 boilers, a ratio of nearly 200:1. Pellets are predominantly sold in 15-kilogram bags while bulk pellet sales are practically non-existent. Even many boilers used bagged wood pellets. Pellet stove sales are growing at a rate of 5-10 per cent annually. The average pellet stove uses less than one tonne of wood pellets each year, compared to about four tonnes per year in Canada.

• The Italian government has introduced a program that enables taxpayers to recover 65 per cent of the cost of a pellet stove installation through their income tax returns.

• Canadian wood pellets are regarded to be of the highest quality, but expensive. Consequently many unscrupulous Italian distributors are branding pellets as “Canadian”, even if the pellets are imported from elsewhere. Our only protection is to use the CANplus pellet certification brand in addition to ENplus. No pellet producer outside Canada is allowed to use the CANplus trademark.

• Air pollution from wood burning has become a political issue in Italy. The natural gas lobby has campaigned against wood pellets, saying the emissions from pellet stoves are the same as from the many old inefficient wood stoves that are still in service in Italy. Fortunately, Italy has passed a new “National Law for the Quality Classification of Biomass Heating Systems” which rates stoves on the basis of emissions performance for particulates, organic gases, nitrous oxides, and carbon monoxide. Pellet stoves have been found to be highly rated under the new law.

Italy remains the best option for those wishing to export residential quality pellets to Europe. Winter temperatures have returned to normal after three consecutive warmer than normal years. Pellet demand in other European countries has depressed their exports to Italy. Pricing remains somewhat challenging. Nevertheless, Canadian exporters should consider shipping at least a portion of their production to Italy as a means of diversifying their global market risk.