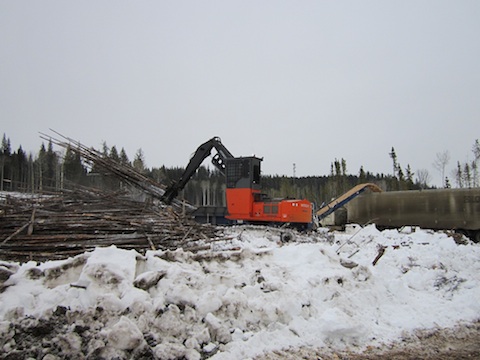 July 18, 2013, Prince George, BC - The Wood Pellet Association of Canada (WPAC) has released a position paper outlining the historical growth and significance of BC's wood pellet sector, and detailing the changes needed to BC's fibre allocation regime if the sector is to remain competitive.

"In 2012, the Southeast US pellet industry surpassed BC as the number one exporting region," notes the authors of Improving Fibre Security and Affordability for British Columbia's Wood Pellet Industry.
"While the Southeast US industry is growing rapidly, BC’s pellet
industry growth has stalled, due in large part to the lack of access to a
long term cost effective and predictable fibre supply. Access to secure
affordable fibre supply has now become the biggest threat to the
continued viability and growth of BC’s pellet industry."

The paper states that the province's "hands-off approach" to the
bioenergy fibre supply has hindered investment in pellet capacity,
instead sending that investment to the souheast US. Ironically, the
authors note that even BC's logging contractors have more fibre tenure
security than pellet producers, who often have to depend on the
continued good will of the lumber sector for allocation. The fact that
the current Bio-economy Transition Committee does not include members of
the pellet sector is a further cause for concern, the authors explains.

"The Province and the primary forest industry (pulp and sawmill
sectors) have jointly created a Bio-economy Transition Committee to plan
for the future of the forest bio-economy. The pellet industry –
presently the only viable sector of the bio-economy – is restricted to
participating on a subcommittee but is excluded from the main committee.
Since the proceedings of the Bio-economy Transition Committee have not
been made public, concerns us that decisions being taken do not reflect
the needs of the pellet sector."

The paper makes several suggestions to improve the fibre security and
investment climate for the wood pellet sector in BC. These include
involving the sector on the Bio-economy Transition Committee,
re-affrming the province's commitment to the bioenergy sector, creating a
tenure framework in which there are real incentives or requirements for
primary tenure holders to allocate meaningful volumes of residual
material to the pellet sector, and creating a carbon tax on slash
burning to promote alternate uses of this bio-material.