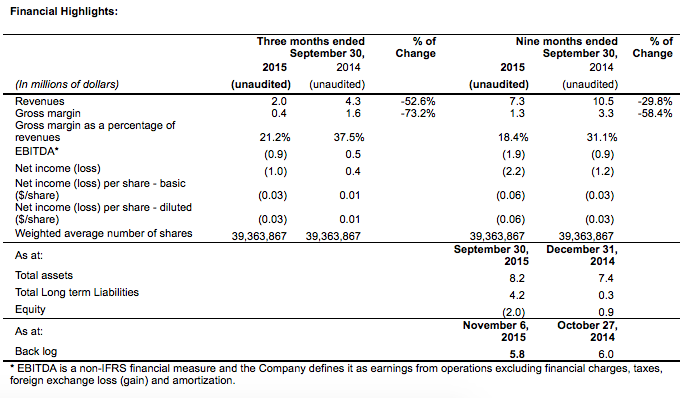 Revenues
Xebec posted revenues of $ 2.0 million for the third quarter of 2015, a 52.6 per cent decrease compared to $4.3 million in the third quarter of 2014. This decrease is mainly explained by lower sales in the Natural Gas Dryer segment and Gas Purification segment respectively by $(1.1) million and $(1.1) million, and no sales in the Associated Gas segment during this quarter compared to $0.2 million in the corresponding period last year.

Revenues were $7.3 million for the nine-month period ended September 30, 2015 compared to $10.5 million for the corresponding period. This decrease of $3.2 million is mainly due to lower sales in the Natural Gas Dryer segment, Gas Purification segment and Associated Gas segment by respectively $(1.0) million, $(1.5) million and $(0.9) million.

Gross margin
Xebec’s gross margin for the third quarter of 2015 amounted to $0.4 million compared to $1.6 million for the same period in 2014. The decline versus the same period last year is mostly explained by the negative impact of fixed costs in connection with lower volume of sales.

For the nine-month period ended September 30, 2015, the total gross margin amounted to $1.3 million, compared to $3.3 million for the same period in 2014. Margins were mainly affected negatively in 2015 by the completion of a biogas project with a negative gross margin in Q2 2015.

For the nine-month period ended September 30, 2015, the EBITDA amounted to $(1.9) million compared to $(0.9) million in the third quarter of 2014. Despite the overall lower gross margin of $(2.0) million, better control of selling and administrative costs ($0.8 million), combined with a foreign exchange gain ($0.2 million) have contributed to reduce the difference on the EBITDA level compared to the same period last year.

Selling and administrative expenses decreased by $0.1 million to $1.4 million in the third quarter of 2015, representing a reduction of 5.5 per cent. The decrease is mainly explained by a reduction of expenses in salaries, professional fees, IT and advertising.

For the nine-month period ended September 30, 2015, the selling and administrative expenses were $3.7 million, compared to $4.5 million for the same period last year. The decrease is mainly explained by the implementation of cost control measures such as reduction of salaries, travel and IT cost for $0.7 million.

Resignation of Chief Financial Officer
Xebec also announced today that Alnoor Mandjee, (CPA, CA) has tendered his resignation as Chief Financial Officer and Corporate Secretary of the company for personal reasons, effective Nov. 13, 2015. The Company would like to thank Mr. Mandjee for his contribution and wish him the best in the future. Xebec has initiated a search to fill his position.

About Xebec Adsorption Inc.
Xebec Adsorption Inc. is a global provider of clean energy solutions to corporations and governments looking to reduce their carbon footprints. With more than 1,500 customers worldwide, Xebec designs, engineers and manufactures innovative products that transform raw gases into marketable sources of clean energy. Xebec’s strategy is focused on establishing leadership positions in markets where demand for gas purification, natural gas dehydration, and filtration is growing. Headquartered in Montreal (QC), Xebec is a global company with two manufacturing facilities in Montreal and Shanghai, as well as a sales office in Houston Texas (USA) and distribution network in North America and Asia. Xebec trades on the TSX Venture Exchange under the symbol XBC. For additional information on the company and its products and services, please visit the Xebec web site at www.xebecinc.com.