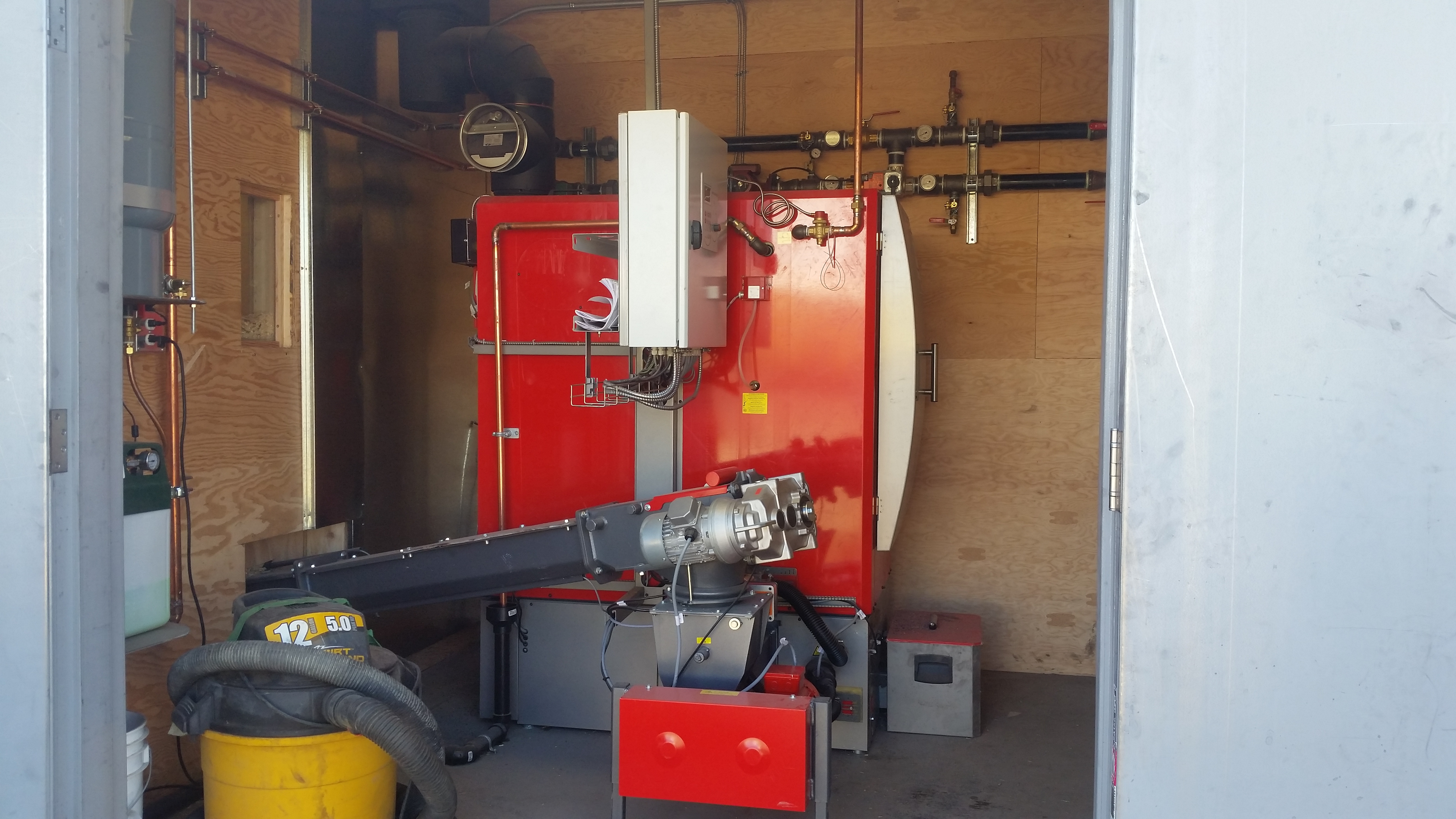 Fresh off the Government of Yukon’s announcement of the Yukon Biomass Energy Strategy, which will guide the development of a biomass energy sector in the territory, a group of partners used Cold Climate Innovation’s (CCI) recent Yukon Biomass Forum to publicly announce the initiative’s first funded project.

The project—a partnership between the Yukon government’s Energy Branch, CCI, ACS Mechanical, and Raven Recycling—saw the installation of a Hargassner wood chip boiler at Raven, a not-for-profit recycling centre based in Whitehorse. Going forward, the staff there will collect and share data with local stakeholders in an effort to educate the public about the effectiveness of biomass heating.

The real excitement, though, lies in the nature of the fuel source: all the wood chips used to fuel the boiler will be derived from waste wood, including pallets, construction waste, and fire kill.

“As a recycling plant, Raven has access to a huge amount of waste wood that would otherwise be going to landfill,” explains Eoin Sheridan, a project innovation officer at Cold Climate Innovation (CCI), a branch of the Yukon Research Centre at Yukon College. “It’s a big plus point for this project in terms of benefit to the territory.”

Based on the sheer volume of such wood at their disposal, Sheridan believes the prospect of installing more biomass boilers across the territory looks promising.

“They have a huge multiple of the amount of chips they will need coming from this waste wood stream, so there’s potential fuel for the future for another five or six installations just from that one source,” he said. “If we can divert waste wood from landfills and use it, then it’s a win-win situation.”

The project was initiated by Chris Schmidt of ACS Mechanical, who was always troubled by the amount of wood waste he witnessed in the territory.

“I never understood why we couldn’t find a better use for it,” he said. “The work is done—all you need to do is chip it and haul it to a site.”

Hoping to find a better alternative, Schmidt figures he had been researching biomass heating alternatives for seven or eight years when the operators at Raven asked him to look into replacing their boilers.

“I’ve been doing maintenance at Raven Recycling for over 10 years,” he adds. “There were three old oil boilers there, and they asked me to look into replacing them. That’s when I discovered the Hargassner wood chip boiler, which was the only one I’d seen that was Canadian Standards Agency [CSA] approved.”

After presenting his idea to CCI—who agreed to provide support and funding, and helped to secure additional funding from the Energy Branch—Schmidt travelled to Quebec to visit representatives with Hargassner Canada and to train how to use the machine and ensure its proper functioning.

So far, Schmidt is more than happy with the results.

“I’m over the moon,” he said. “I’ve tried to develop projects like this in the past, but there was very Iittle support and I couldn’t find a site. It’s just such an amazing machine. It cleans itself, it gasifies, it has a lambda sensor—which senses oxygen in exhaust—and it adjusts the damper to burn the fuel source with the most efficiency.”

Sheridan, for his part, is excited by the potential knowledge, expertise, and insight to be gained from the pilot project at Raven, which he hopes will pave the way for future biomass projects in the territory.

“We hope to have more sophisticated projects happening in the future, and it’s nice to have someone we call on for information and experience,” he said. “If we can get some early-stage information that can help people doing projects in the future, that’s always a good thing.”

All of this thinking fits nicely with the aims laid out in the Yukon Biomass Energy Strategy, which lists six key action areas, including using biomass energy for government infrastructure and facilitating the development of a biomass energy industry in the Yukon. It was also on full display at CCI’s two-day Yukon Biomass Forum, where Sheridan’s team sought to create new relationships among stakeholders.

“With the Forum, we are trying to bring people together,” Sheridan explains. “If we can get people with knowledge from different areas to work together and come together and share knowledge, then it’s our hope that ideas can grow out of that and possibly create projects we can support in the future. That’s our goal here.”

Looking at everything that has taken place so far this year, Schmidt believes the territory is on the right track, and has high hopes for the places this newfound momentum could take them.

“I’d like to see this as a shift, and my hope is that it becomes a whole industry—just using what we have,” he said. “Road construction, ditch cleaning, power lines, lot clearing—think of all that biomass. If we could use all that, that would take care of a lot of energy.”

*To read more about The Government of Yukon adapting its biomass strategy, click here.