Jan. 7, 2019 - From a North American producer’s perspective, 2018 was one of the best years in quite some time for the wood pellet trade. After several years of tempered development following the ramp up of the Drax power station in the UK, new markets and consumers drove strong growth in global demand. Imports to Denmark, South Korea and Japan all increased at least 40 per cent from previous highs, with Japanese wood pellet imports more than doubling. Better market conditions and less inventory also led to strong growth in North American and European heating markets after several weak years. 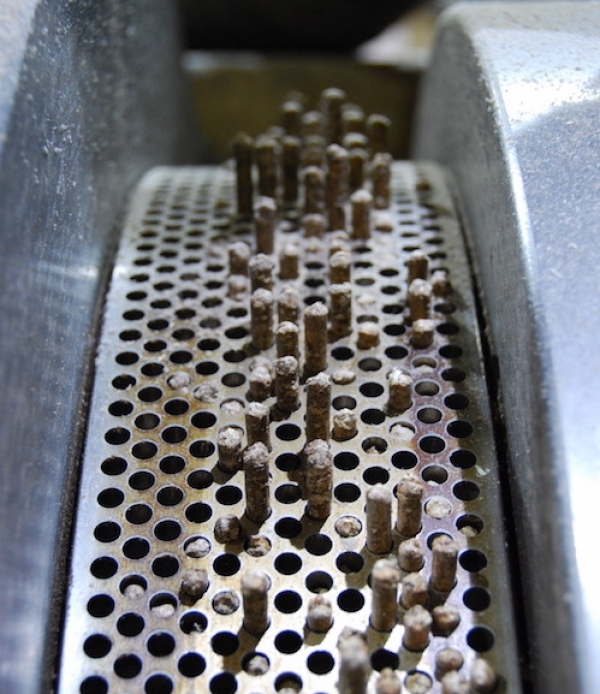 Overall, wood pellet trade in 2018 is estimated at 23.8 million tonnes, a whopping 26 per cent increase from 2017’s 18.9 million tonnes. This article will provide an outlook for what to expect from key markets in the years to come. 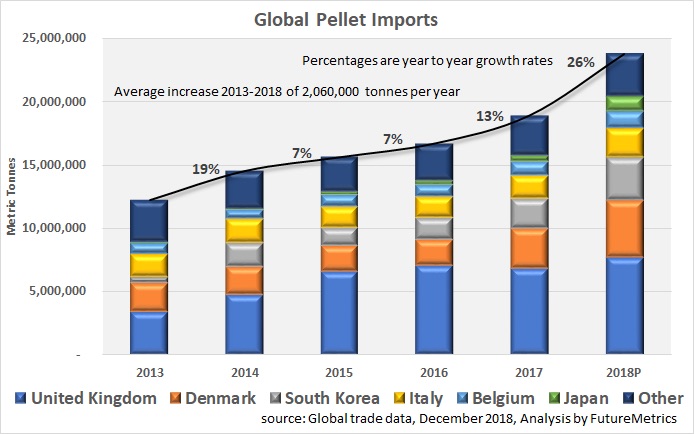 Nearly 60 per cent of this new demand growth is projected to come from Asia, with most of the remainder from increased demand in the UK and the re-emergence of a significant industrial pellet market in the Netherlands. 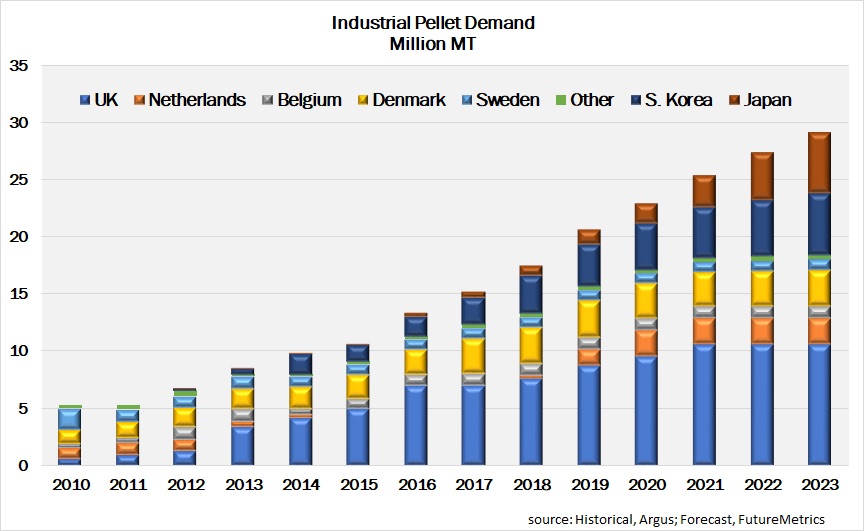 United Kingdom
In 2018, UK pellet demand increased significantly for the first time in several years with the commissioning of EPH’s 396 MW Lynemouth Power Station conversion and the conversion of a fourth unit at the Drax power station.

Moving forward, growth will be primarily driven by a ramp up to full operation at Lynemouth and increased availability at the Drax power station. In 2020, UK demand will increase again with the scheduled commissioning of MGT’s 299 MW Teeside CHP plant, expected to use up to 1.5 million tonnes per year.

Netherlands
The Netherlands has a history as a major market for industrial wood pellets. In 2010, the Netherlands was the biggest market for industrial wood pellets – used for co-firing to meet renewable energy goals. The market rapidly declined when a new renewable energy subsidy scheme was introduced in 2012. The new SDE+ scheme required new sustainability standards to be developed before biomass co-firing could qualify for subsidies. That sustainability criteria were finally approved in 2015.

In 2016, subsidies were awarded for co-firing at four power plants: RWE’s Amer and Eemshaven power stations, Engie Rotterdam and Uniper Maasvlakte 3 (MPP3). Unit 9 at the Amer power station, which had previously co-fired under the old subsidy scheme, resumed co-firing significant amounts of wood pellets in the fourth quarter of 2018. 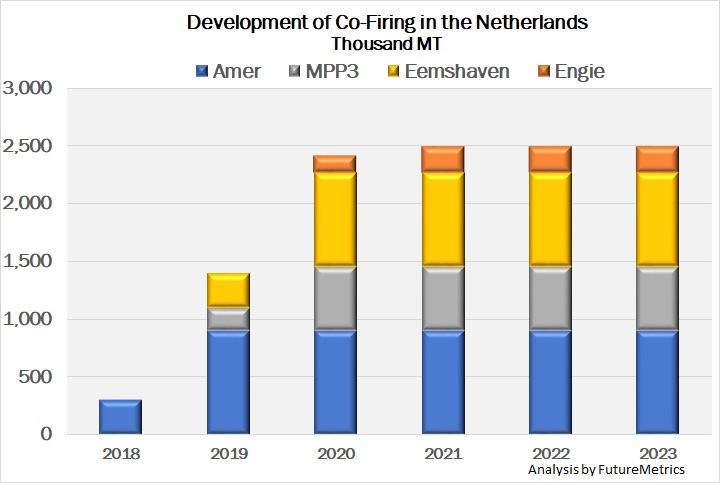 Japan
Japanese wood pellet imports are on pace to exceed one million tonnes for the first time in 2018, approximately double the amount of imports from 2017. Through the first three quarters of 2018, 63 per cent of Japan’s wood pellet imports came from Canada and 31 per cent from Vietnam. Due to the fixed price and long contract length of the Feed-in-Tariff subsidy that supports renewable energy in Japan, long-term contracts from strong counter-parties, like those in Canada and the U.S., are the preferred way most Japanese buyers procure wood pellets. We expect to see continued rapid expansion in Japanese wood pellet imports in the years to come with imports projected to exceed five million tonnes in 2023. Our full detailed analysis on Japan is available in FutureMetrics’ 2018 Japanese Biomass Outlook, which will be updated again in early 2019. 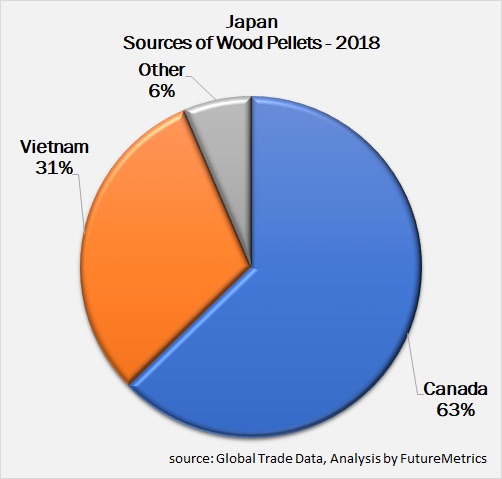 South Korea
In South Korea, renewable energy is promoted by a renewable portfolio standard (RPS) that requires utilities to source an increasing amount of their energy from renewable sources. Tradable Renewable Energy Certificates (RECs) are used to demonstrate compliance. Utilities have three ways of meeting the RPS: produce RECs themselves, purchase RECs on an exchange, or pay a fine equal to 150 per cent of the average REC price during the year. Utilities have found that co-firing wood pellets is one of the most cost-effective ways of meeting the RPS.

However, due to uncertainty regarding the value of RECs, the price of power and the price of pellets, South Korean buyers have a more difficult time entering into long-term contracts. Nevertheless, there have been instances of successful contract negotiations with North American producers, particularly with dedicated biomass plants (as opposed to major utilities co-firing at coal stations).

South Korean demand is largely responsible for the rapid development of wood pellet production capacity in Southeast Asia. In 2018, South Korea’s wood pellet imports are projected to have reached 3.4 million tonnes, with more than 95 per cent of that volume coming from Southeast Asia. 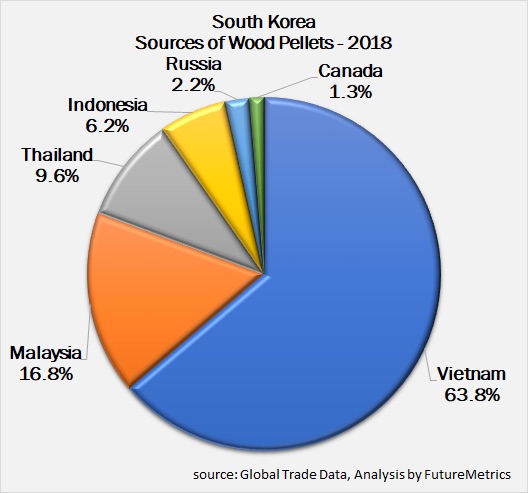 Pellet heating markets
While industrial pellet markets get the bulk of market analysts’ attention, heating markets make up a significant amount of total global demand and FutureMetrics forecasts continued strong growth over the next five years. Warm winters and low competing fuel prices, particularly for heating oil, slowed pellet heating demand growth in North America and Europe over the last few years. While a recent fall in oil prices raises some concern, for the most part pellets still enjoy a significant cost savings over fossil-based heating fuels in Europe and, with the notable exception of natural gas in the U.S., North America as well. 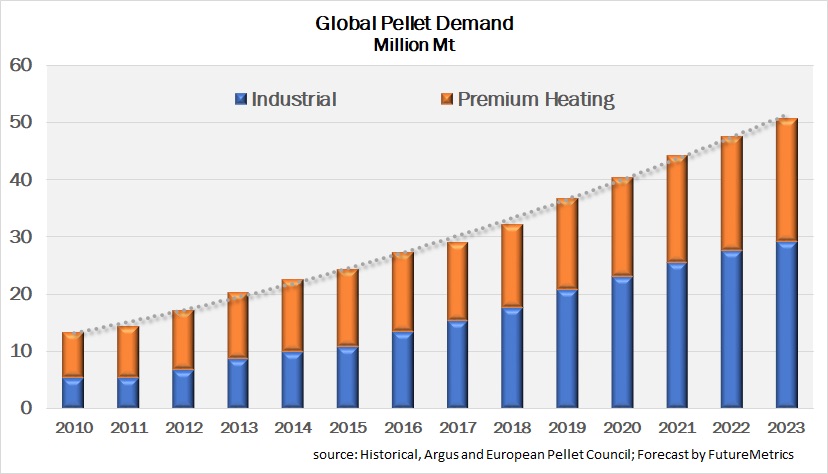 For the most part, pellet heating demand is supplied by local producers, so it has less of an impact on global trade. While the U.S., Germany, France, Austria, Sweden and others have substantial pellet heating demand, the only market that has a significant impact on global trade is Italy, where pellets are primarily used for home heating. We estimate that Italy imported 2.3 million tonnes of pellets in 2018. The market is likely even larger as there is a black market for wood pellets in Italy to avoid a 22 per cent value-added tax (VAT) – estimated at 200,000 to 300,000 tonnes by the Wood Pellet Association of Canada.

The U.S. has one of the largest pellet heating markets in the world. Annual demand in 2018 is estimated at 2.5 to 3.0 million tonnes. About 85 per cent of U.S. demand is met by small- and medium-sized domestic producers, roughly 10 per cent is imported from Canada and five per cent comes from industrial producers in the U.S. South. For the last several years, the U.S. pellet market has had a glut of inventory, but that has cleared and producers are now worried about shortages in the market over the 2018-2019 heating season, primarily due to fibre supply issues in the East (about 50 per cent of the U.S. market is in the Northeast). We expect to see moderate growth in the U.S. heating market over the next several years, but nothing like what is expected in industrial markets. 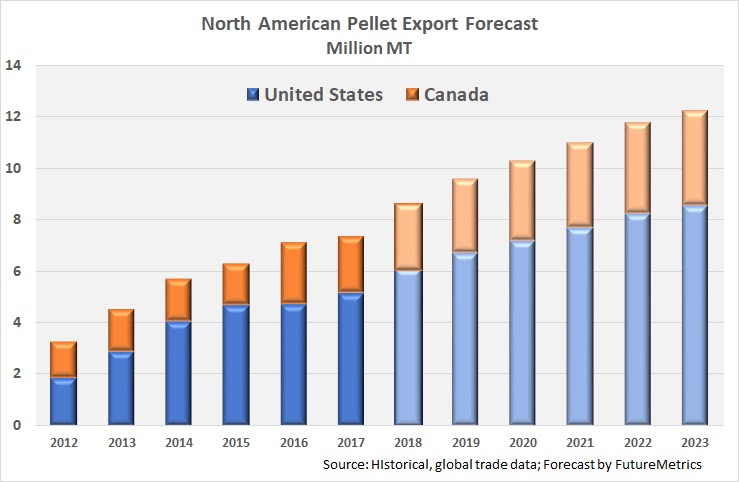 With pricing and demand growth strong in industrial wood pellet markets, we expect to see new major industrial pellet mills to be developed in the U.S. South after several years of measured growth. In addition, the U.S. Pacific Northwest is well positioned to supply some volume to rapidly growing Asian pellet markets. Maine is poised to become a new significant exporter.

In western Canada, new growth will likely be more measured. Forest fire losses and the end of the high harvest rates from dead stands killed by the mountain pine beetle are affecting sawmill production and thus sawmill residual output. Pellet producers must procure forest residuals to maintain production rates. Eastern Canada will see the development of several small- to medium-sized industrial pellet mills as sawmillers in those regions look for markets for their residuals.