A look at the challenges and opportunities ahead for wood pellet markets in 2023. 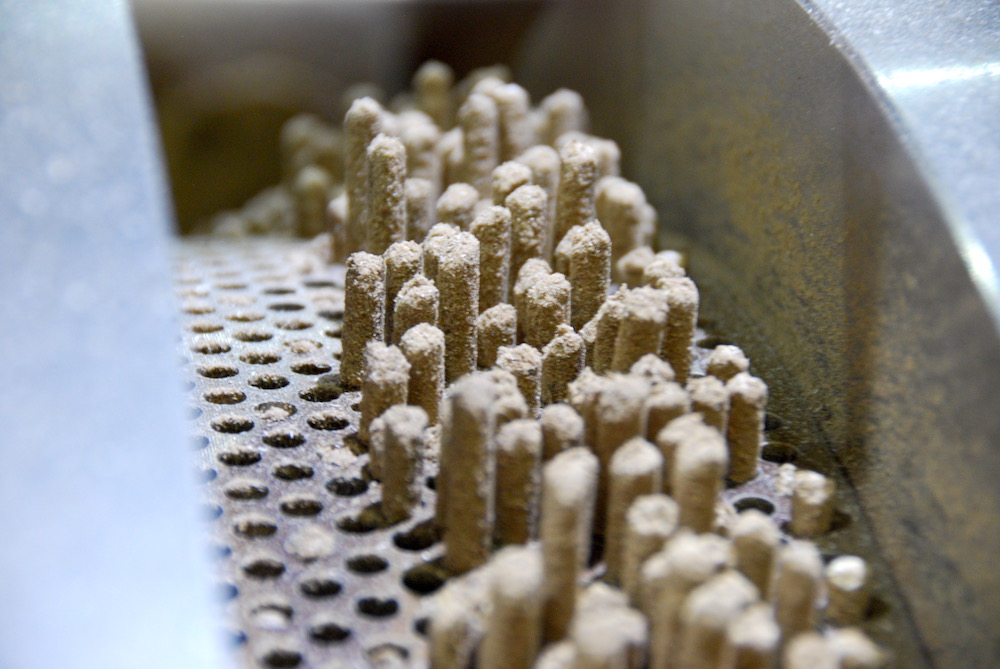 The wood pellet sector is facing two critical challenges this year: the impact of inflation on the pellet fuel supply chain, and the impacts of the Russian invasion of Ukraine on global supply and demand.

While this article focuses on economic and geopolitical forces, it should be noted that policy matters too. As the frequency and severity of the consequences of climate change increase, the goal of decarbonizing the energy sector will drive policymaking. Pragmatic and rational policy will recognize the value of sustainably sourced renewable solid fuel for heat and power as a necessary support mechanism for the off-ramp to a decarbonized future.

And while this article focuses on near-term challenges, FutureMetrics strongly believes that the benefits derived from replacing some fossil fuels with renewing carbon beneficial pellet fuel will support continued robust demand at least for the next few decades.

High inflation is creating challenges in every sector. For pellet manufactures, there are obvious concerns about labour costs, consumables costs, and power costs. However, the largest cost to producing wood pellets is the cost of the delivered woody feedstock.

Pellet factories, as FutureMetrics has stated in a number of presentations, are “bottom feeders”. They depend on the residuals from sawmills and from managed working forest harvests. Pellet plants cannot pay sawlog pricing for feedstock. Thus, the demand by primary users of forest products, i.e., sawmills, impacts the supply of the sawmill and forest by-products. (On average, about 60 per cent of a sawlog becomes lumber or other finished products. The rest is sawdust, edge slabs, and bark.)

Part of the current pellet feedstock challenges in North America derive from the U.S. federal government’s response to high inflation. Higher interest rates make the cost of home ownership higher. The monthly mortgage cost for a typical home in the U.S. has doubled in the past 18 months (see Figure 1). 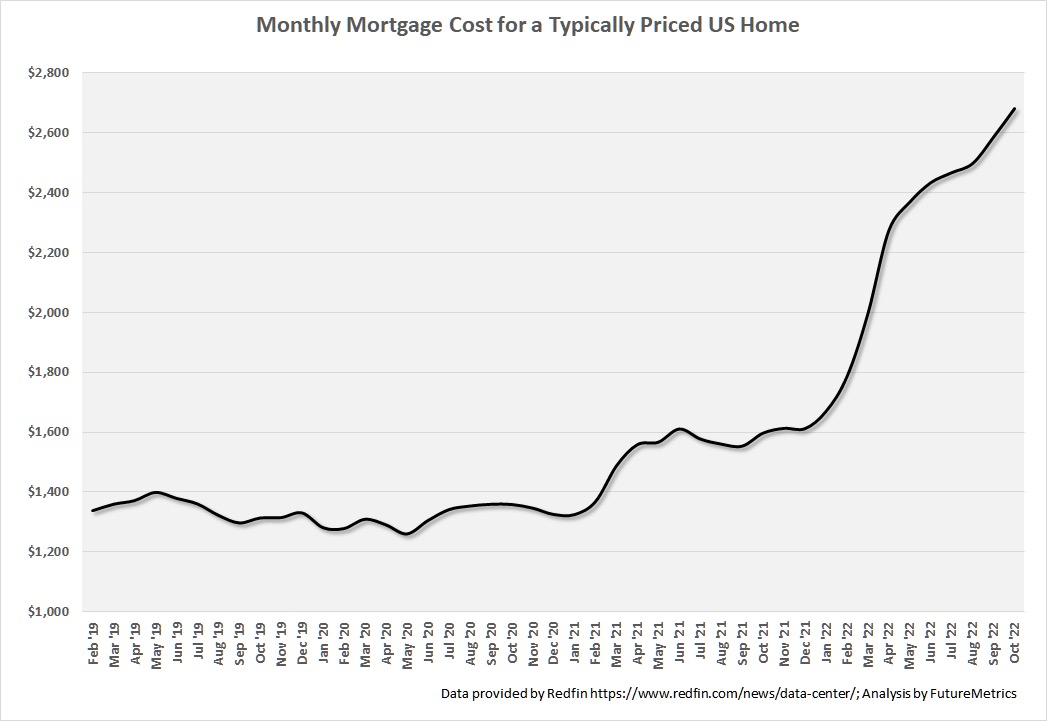 As a result, starts for new private homes in the U.S. have declined significantly since earlier this year (see Figure 2). 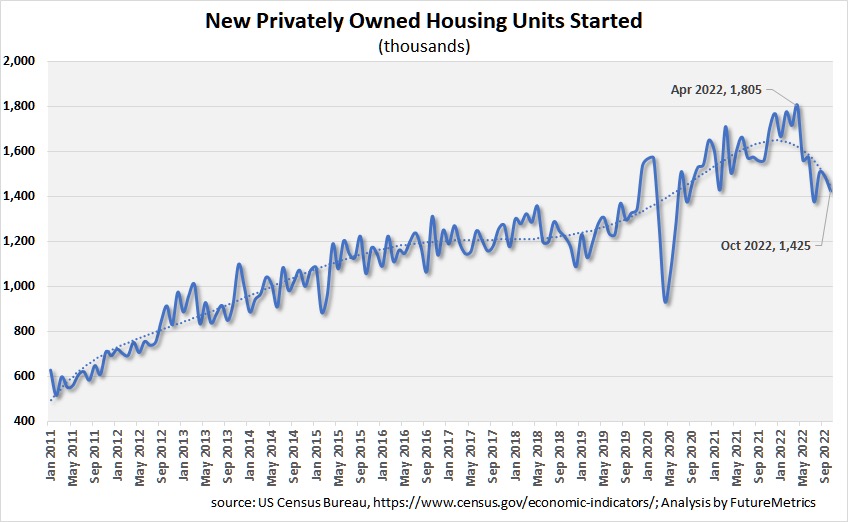 The drop in demand for lumber has led to a slowdown in sawmilling output. This is most acute in Western Canada.

According to the Forisk Blog (forisk.com) “…in Western Canada, there has been at least 1.7 BBF of announced capacity curtailments in 2022, mostly motivated by increased log prices and falling lumber prices, which reduces or eliminates margins.”

Less output by sawmills cascades into less sawmill residuals. And lower demand for sawlogs lowers the production of forest residuals.

Adding to the cyclical downturn in the housing market are high diesel fuel prices (see Figure 3). 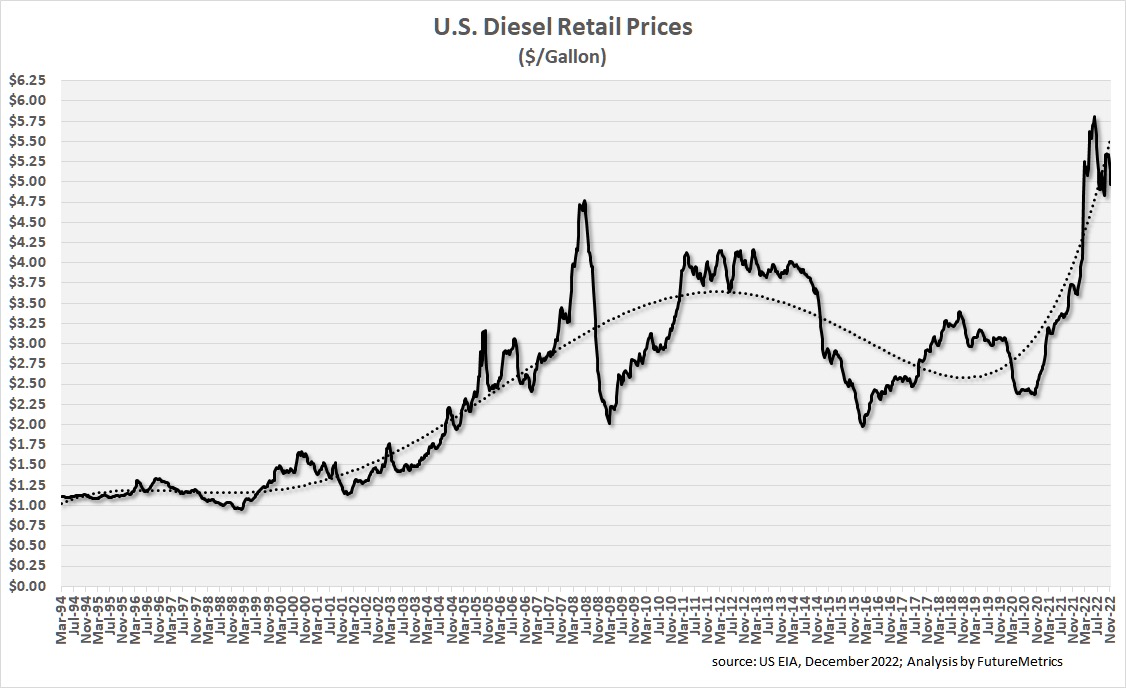 Pellet producers in almost all locations, not just in North America, are experiencing similar challenges.

Housing markets are traditionally cyclical and eventually housing starts will revert to trend. Diesel fuel costs may reset at a higher “new normal” which would mean higher costs in every sector in which transportation is needed.

The Russian invasion of Ukraine and the resulting sanctions have roiled every sector of the global economy. Energy markets, including the wood pellet sector, have been strongly impacted.

As Table 1 shows, Russia, Belarus, and Ukraine contributed about 15 per cent to the total international trade in wood pellets in 2021.

The majority of that trade went into Western Europe. Many of the pellet producers in Western Russia are certified under both SBP and ENplus, thus allowing their use in the European and UK industrial and heating markets. As a result of the Russian aggression in Ukraine, those certifications have been suspended indefinitely. Subsequently, direct imports into western Europe from Russian and Belarus have almost gone to zero (Figure 4). 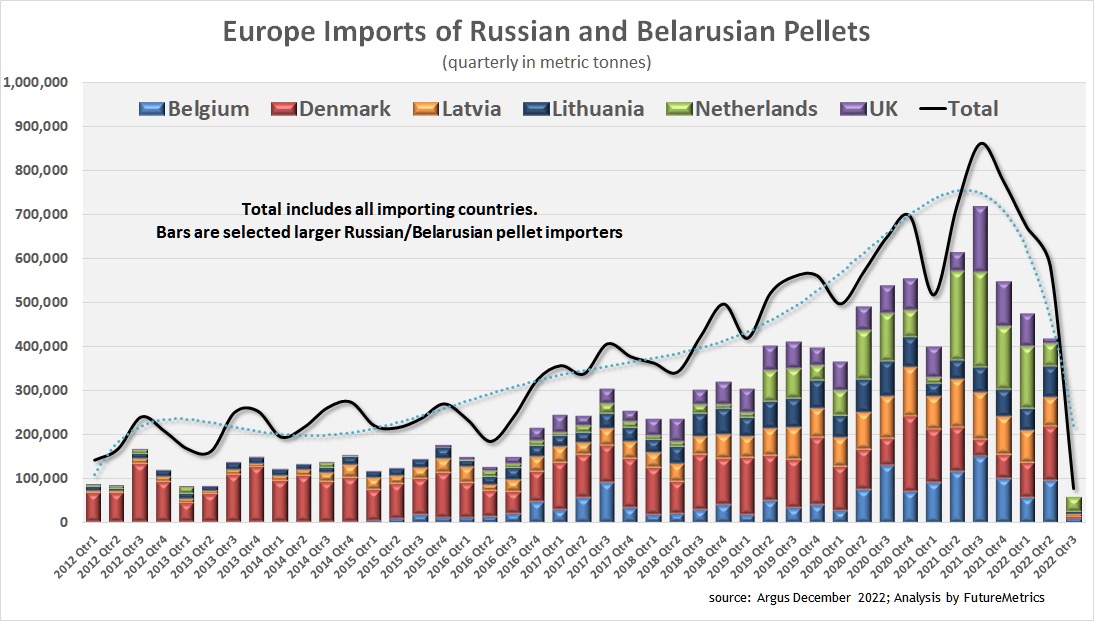 The impacts from this sudden shortage have been dramatic. Both the industrial and heating pellet sectors have experienced unprecedented price spikes (Figure 5 and Figure 6). 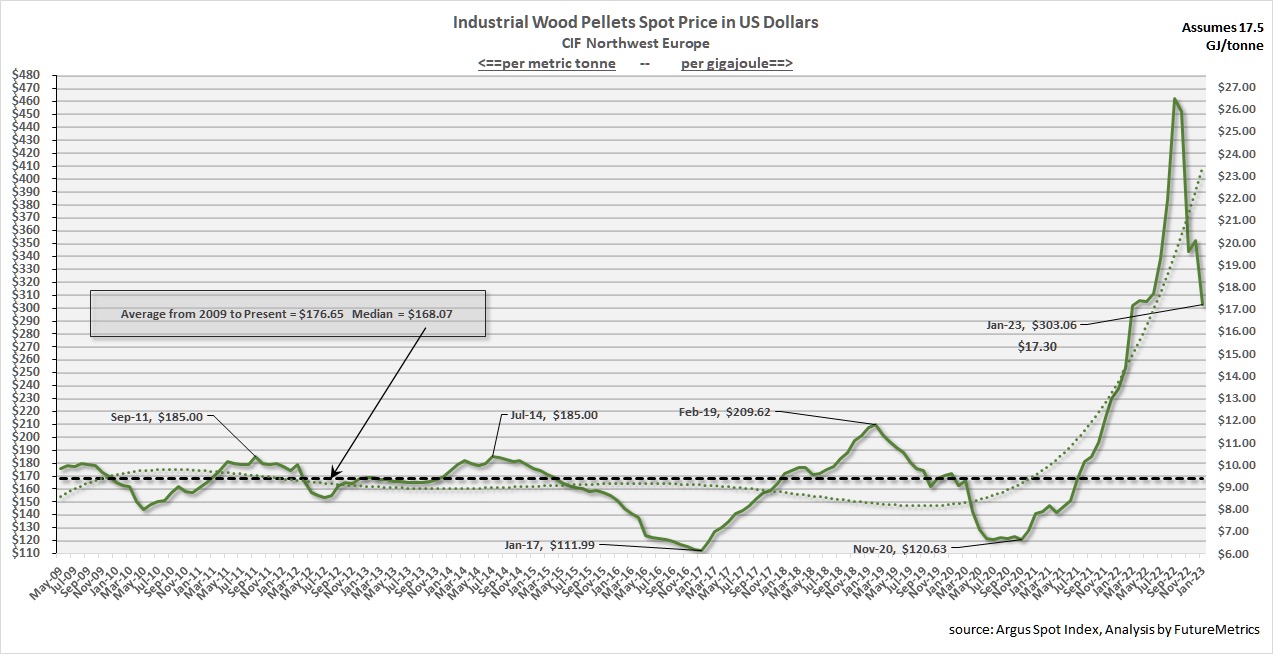 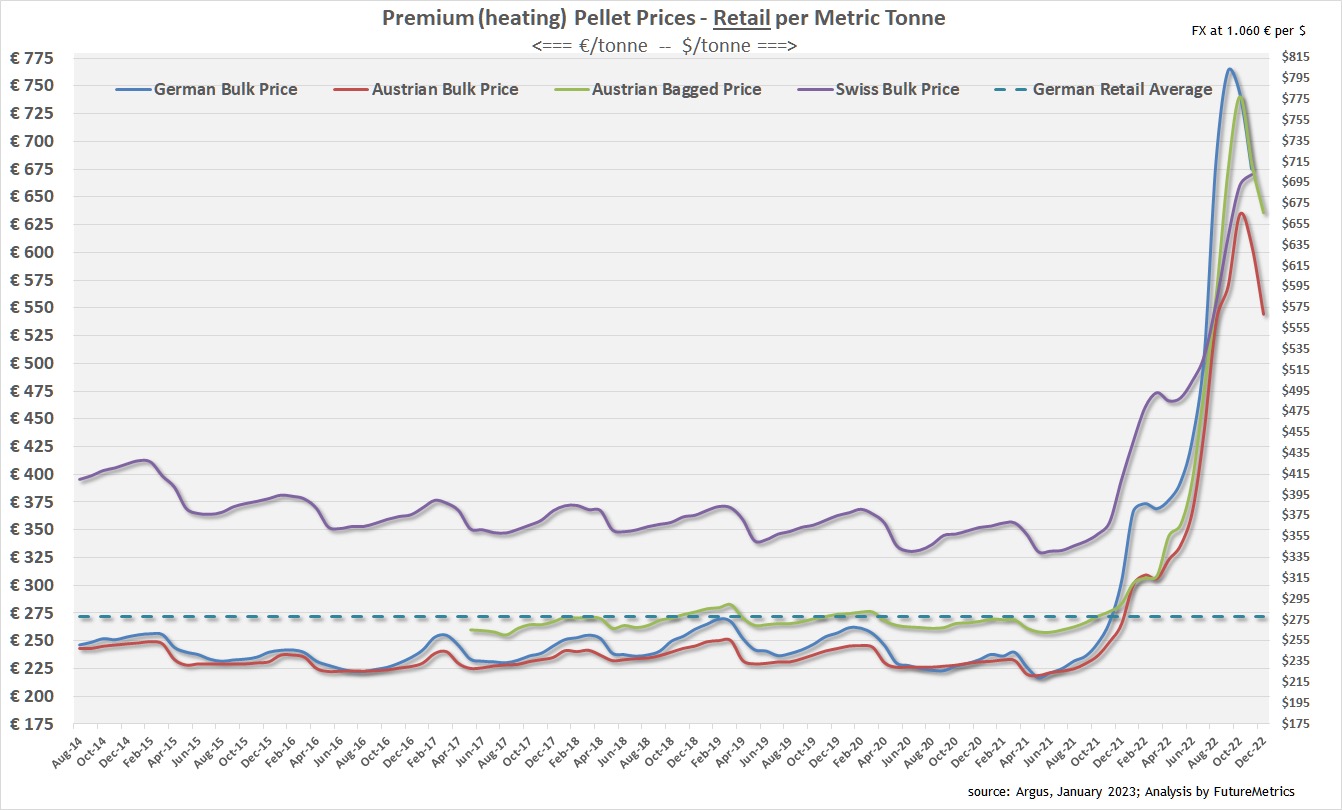 Several factors have mitigated the initial impacts; allowing spot prices to fall from their record highs.

Thus far (as of mid-December 2022) the winter weather in Europe has been unusually mild. For example, the sum of heating degree days (in C) for October, and November in Vienna was 476 and 488 in 2020 and 2021 respectively. In 2022 is it 382. Lower than usual heating demand has allowed stocks of pellets to be increased, taking some pressure off of prices. Natural gas prices in Europe have also fallen significantly from their highs, which is motivating increased use of natural gas over pellets.

In the industrial sector, unexpectedly slack demand in the UK has allowed some cargos to partially fill the EU heating pellet gap. For example, the long-delayed start and ramp up the MGT Teeside 299 MW heat and power project means that at least the equivalent of about one million tonnes per year (about 20,000 tonnes per week) of pellet production that was built to supply that plant can spill into other markets. Also in the UK, at the time of this report, the Lynemouth power station (three 133 MW boilers or the equivalent of well over 1.5 million tonnes per year of pellet fuel demand) has been offline for many weeks.

But both of those mitigating circumstances will likely fade. The weather will turn cold and the power stations in the UK will soon be consuming pellets at their expected rates.

While Russian pellets are not being shipped directly into major EU markets, some Russian pellets may be “leaking” into some European countries. One possible pathway is via Turkey. As Figure 7 shows, Turkish exports to EU countries increased significantly as the sanctions kicked in. 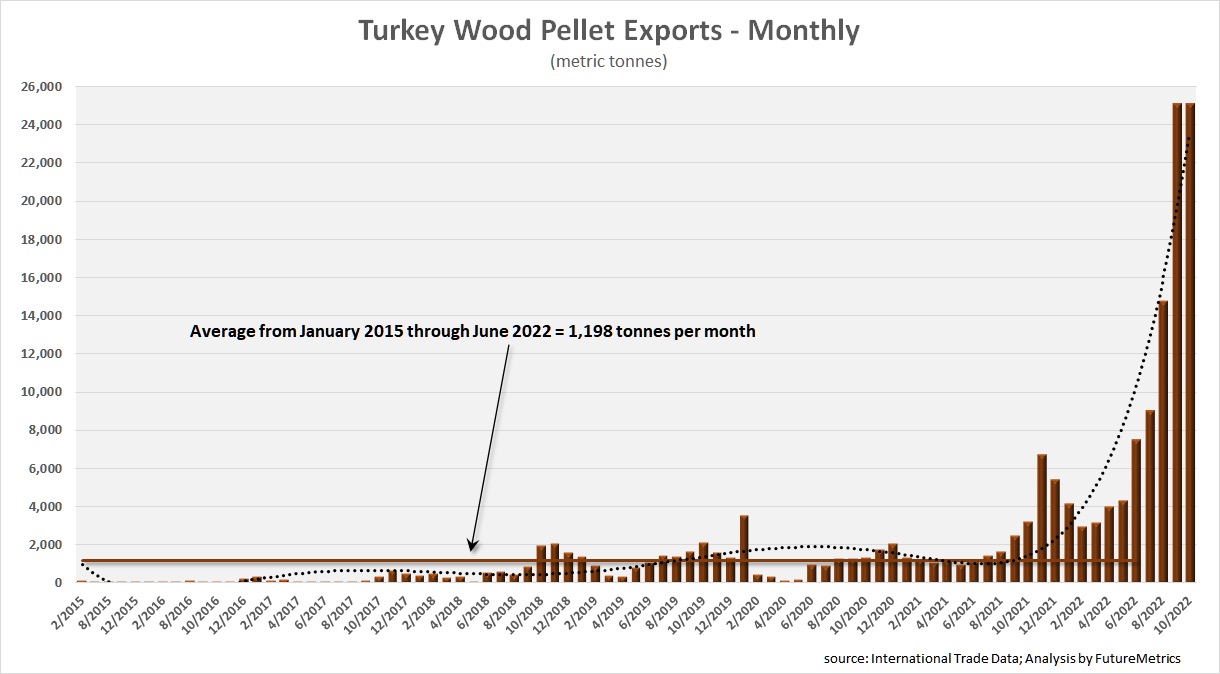 Without the exports from Russia and Belarus (and Ukraine), even considering some leakage, the global supply of pellets is significantly short of demand. Figure 8 shows historical demand and supply and forecast demand based on current policies. As the chart shows, the markets were already tight in 2022 prior to the sanctions. The sudden and unexpected drop of supply made the aggregate global markets for pellets over two million tonnes per year short in 2022 (the red text above the bars), assuming that nearly one million tonnes per year of sanctioned pellets are still entering the markets.

The green text in 2023 and 2024 shows how much new supply that has not been formally announced needs to be built to match expected demand. 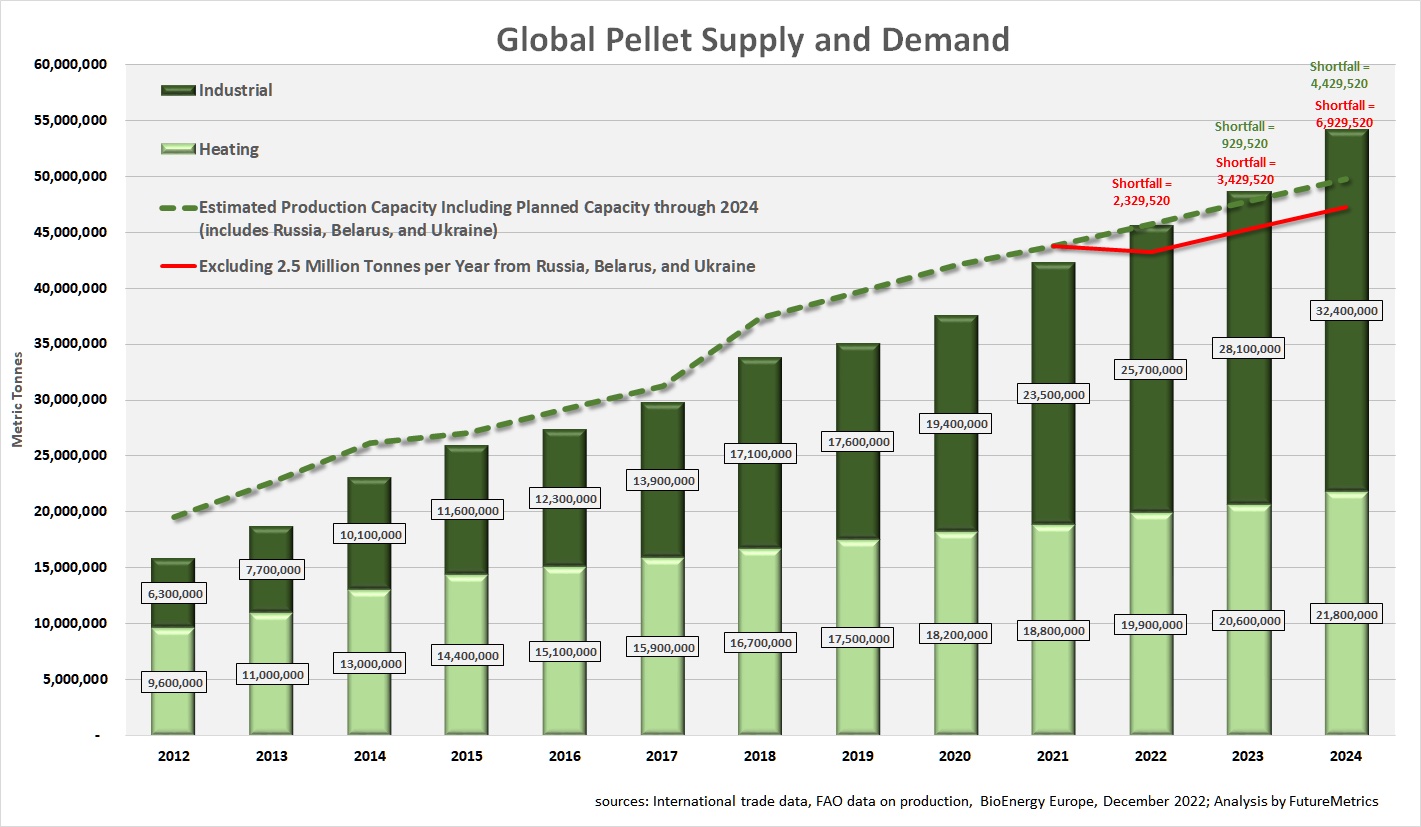 Much of the 2023 shortfall is due to growth in the heating markets. Many small domestic heating pellet plants in Europe are not tracked and thus their plans for expansion are unknown. However, as Figure 9 shows, Europe’s production growth has traditionally kept up with demand growth.

The markets, particularly in Western Europe, will still be significantly short at least into 2023. New pellet production or expanded production that requires new equipment cannot happen quickly. A new pellet factory, from concept to full production, takes at least two years; and typically, it takes longer.

There is an added complication to having supply catch up to demand in the EU heating pellet markets. The heating markets are essentially spot markets. There are no seven- or 10-year offtake agreements to support the construction of a new pellet factory. There is the potential that millions of tonnes of Russian supply could re-enter Europe at some point and compete for market share. This uncertainty may hinder investment decisions for new production capacity that targets the current shortage in the EU heating markets.

In terms of supply, one country is strongly benefiting from the sanctions on Russian pellets. As Figure 10 shows, South Korean imports of Russian wood pellets have increased by a factor of about seven from the long-term monthly average. 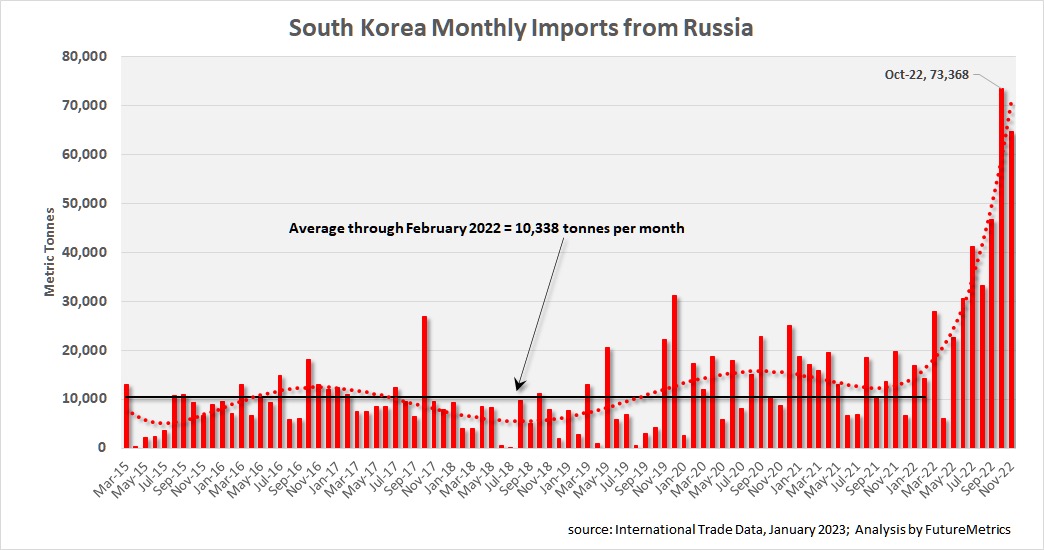 In terms of price, producers that have excess capacity that is not committed to offtake agreements are very happy (particularly given the higher wood costs mentioned earlier). As Figure 11 shows, the average price for pellets imported into the UK from U.S. and Canadian producers shot up in October 2022 by nearly $70/tonne from the recent average. 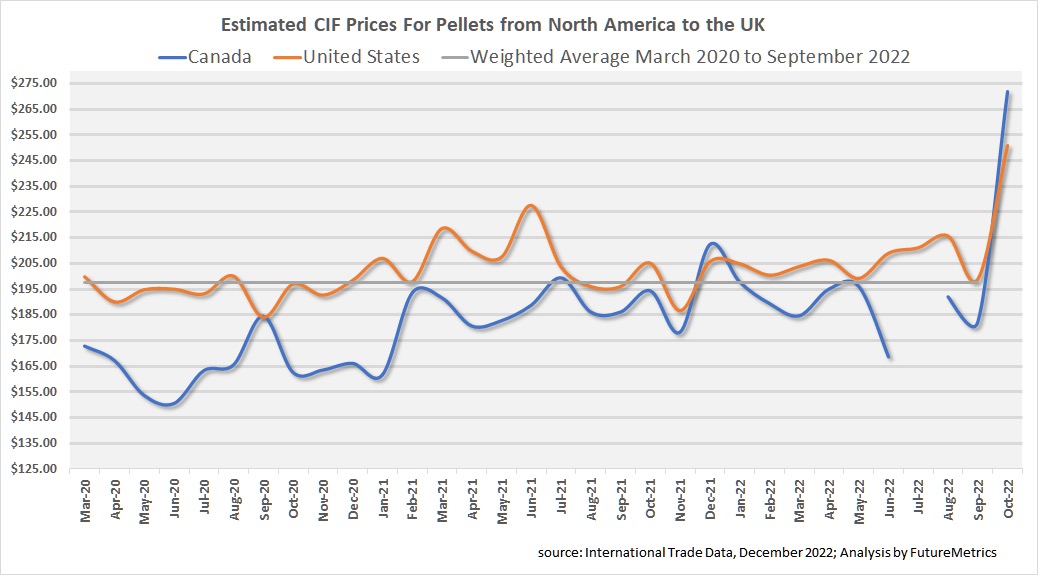 The uncertainty generated by high-inflation and by the war in Ukraine (and the follow-on impacts from sanctions) makes predicting the duration and ultimate consequences of market disruptions impossible for the near and medium terms.

However, the proven carbon benefit and economic value of using a renewable solid fuel for heat and dispatchable power generation, and emerging new markets for densified biomass as feedstock in biochemical and sustainable aviation fuel production, means that the rest of this decade and into the next will see continued growth in the sector.