It’s a long road to scaling up, but success is possible. That was a key theme at the Scaling Up conference, which took place in Ottawa in late November. While biomass is the only renewable resource that can substitute carbon for fossil fuels, rapid success is far from assured. 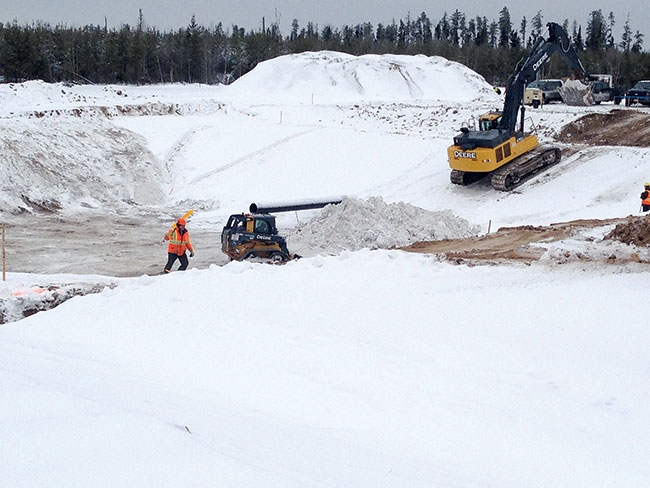 The Bio-Economy Centre site preparation at Whitesand First Nation in northern Ontario. It’s a long road to scaling up

The CSI is based on five pillars of sustainability: society, culture, capacity, economy and ecology. “It’s really about improving the livelihoods of people,” Mackett said. “It’s not just an energy project, it’s a sustainability project.” The community-owned project will be the first in Ontario to replace the primary-use diesel generators. The project has completed the required Renewable Energy Approval and is also supported by a 20-year renewable Power Purchase Agreement with the Independent Electricity Supply Operator.

As a result of the CSI, Whitesand’s “Bio-Economy Centre” has started site preparation through a joint contribution of $4.2 million from the federal and provincial governments and Whitesand.  The site preparation will enable full construction of a wood merchandising yard, a 5MW biomass combined heat and power plant, and a 90,000-metric wood pellet facility. The project will create approximately 60 full-time jobs generating approximately $3.5 million in wages a year.

It will also reduce and eliminate approximately 1.1 million litres of diesel fuel used annually to generate electricity, which is currently provided by Hydro One Remote Communities diesel generators. Whitesand is also planning to convert home heating from diesel fuel to a combination of wood pellet stoves and boilers. This will reduce the current use of 300,000 litres a year of fuel for home heating.

Being conceived in the early ‘90s, the project took many years to come to fruition. “It’s very frustrating, and you can expect delays in projects like this in Ontario, but you just have to keep pushing,” Mackett said. “Whitesand took control of its own future, by being the proponent of the project.”

Sébastien Corbeil did want to find a solution when confronted by challenges in getting technology and innovations to a commercial scale. As he highlighted, failure isn’t a bad thing.

Starting from wood pulp, Corbeil said supply of feedstock is not an issue. He said selecting applications is the biggest challenge.

Domtar didn’t reinvest, convinced there was no market for the product. Sustainable Development Technology Canada (SDTC), and oil-field services company Schlumberger brought in some more capital and invested. The latter became the first customer.

“It also gave us credibility. Companies need to have faith in you and some confidence to invest.” He added it is key to keep refining and to work twice as hard on developing applications.

“Educating customers on how to use the product and how to disperse it is very important on how to speed up the process,” he said, noting that Celluforce’s partners being in the manufacturing sector has helped the company.

Roadmap to The Bioeconomy

“It’s clear we’re at the threshold of the bio-age,” Kim Rudd, parliamentary secretary to the minister of natural resources, tells the crowd at an industry event held in Ottawa.

“The IEA studies global energy trends and outlooks and the rollout of the roadmap basically highlights the importance of bioenergy,” said Fernando Preto, a research scientist with CanmetENERGY-Ottawa, NRCan. The roadmap lays out some of the steps to achieve this bioenergy goal, including more international collaboration.

Brown said a stable policy environment is vital for all of these bioeconomy initiatives to work. The ideal policy landscape requires a level playing field, a low-risk investment climate and catalyzing and supporting innovation, he said.

Enerkem’s Marie-Hélène Labrie presented on the company’s success scaling up its municipal waste-to-energy technology. It makes transportation fuels and chemicals from garbage instead of petroleum by chemically recycling carbon contained in garbage in less than five minutes. Enerkem’s approach was successful because it focused on municipal solid waste as the feedstock from the outset, Labrie said. The company then worked to leverage commercially available catalysts, like the Enerkem Alberta Biofuels facility, to reach its goal. Enerkem wants waste to be seen as a resource to make sustainable products.

“They’ve done just about anything they could do right. Now they’re reaping the rewards of that tenacity,” Travis Robinson from the Bioenergy Program, CanmetENERGY-Ottawa, said of Enerkem’s success.

“If all the bioenergy companies out there were like Enerkem, things would be very easy,” he said. “We’d probably have a lot more bio-products on the market today.”

Any successful scaling-up story had issues first that were overcome in order to reach that success, Robinson said.