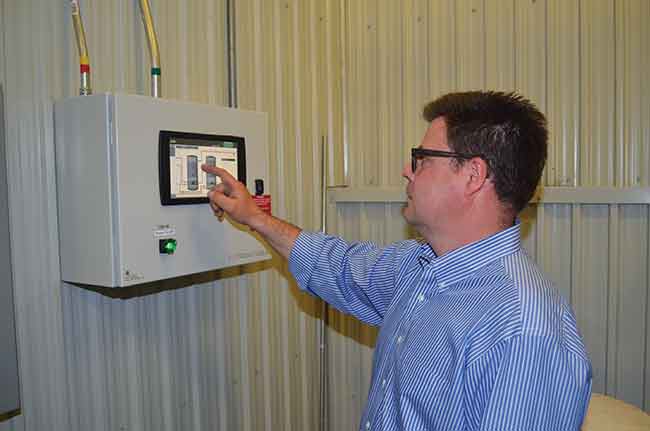 The nursing home, which was recently built for residents in the Edmundston, N.B. area is equipped with 186 beds and was constructed at a cost of approximately $48.5 million. Residents were moved into the facility this past summer. The entire facility is heated using a radiant heating system equipped with two Viessmann biomass boilers that produce upwards of 1.8 million BTUs of heat.

To complement the biomass boilers, which generate the primary heat for the facility, two 4-million BTU Viessmann oil-fired boilers were also installed to make sure the heaviest heating demands for the facility are met in the wintertime.

“For most of the year they won’t burn any oil,” says Daron Thomas of Thomas Industrial Sales, the company that supplied the biomass heating system. “From a combustion efficiency point of view, they run at about 87 per cent efficiency.”

Wood pellets for the biomass boilers are delivered by Saint-Quentin, N.B.-based Groupe Savoie every three weeks to the nursing home’s on-site 60-ton pellet silo that fuels the boilers. The pellets are fed to the boilers via two wood pellet augers.

“It’s fully automatic,” Thomas explains. “Once the system decides to turn on, it feeds itself, runs the augers, measures the combustion efficiency and gets rid of it’s own ash. Once the pellets get burned, sensors activate to communicate that the pellets have burned and run another auger that drives the ash up to an ash can.”

Every few weeks the ash from the biomass boilers is removed and transported to local farmers who spread it on their farmlands as a conditioner.

Once the heat is generated in the hot water boilers it is sent to two 1,500-gallon buffer tanks where it is stored. The water in the buffer tanks is then pumped through a pair of Bell & Gossett pumps at a flow rate upwards of 1,100 gallons per minute and travels through 147,000 feet of in-floor PEX piping that generates radiant heat for the entire facility.

“It’s the biggest [radiant system] we’ve ever done,” says Sylvio Landry of George’s Plumbing and Heating, the mechanical contractor that was chosen to provide the mechanical work for the project.

Thomas says the provincial government’s decision to opt for biomass boilers was likely a combination of interest in energy savings and a desire to be “more green.”

“The province has a green energy plan and they realize by burning wood pellets they grow local jobs, which isn’t the case with any other type of energy,” he says. “They knew this could be a good application.”

Lost in translation
Landry says reading the instructions for the installation of the boilers ended up being one of his biggest hurdles to overcome.

“Some of the manuals were in German,” he says while laughing.

This was due to the installation being a new kind of project in Canada, Thomas explains, stating that Viessmann, which is headquartered in Germany, has since been working on translating all of its manuals for use in North America. Fortunately for the mechanical contractors, Thomas and his associate Terry Thibodeau are well versed in the installation of Viessmann equipment and were able to answer any questions put forth by Landry and his team.

Communication is key
A Viessmann master control communicates via a local operating network (LON) control module to all four boilers and runs the boilers as required, monitoring the temperatures in the buffer tanks and communicating this information to the building management team.

“If I wanted to look at a boiler’s history I could go in and take a look at what is happening, look at the temperatures, the actual return temperatures – how much energy that it’s adding, and any faults that may arise,” Thomas explains.

The system is web-enabled so the operator can log in from a smartphone or tablet and make any necessary changes.

“This system is fairly elaborate because it’s a seniors’ home and the operators need to ensure there’s the proper amount of heat,” Thomas says.

Although Les Residences Jodin nursing home is currently the largest biomass boiler installation Thomas has performed in Eastern Canada to date, he says these types of mechanical systems will soon be commonplace throughout the region. •