April 24, 2017 - Air Canada announced today its participation in the Civil Aviation Alternate Fuel Contrail and Emissions Research project (CAAFCER), a research project led by the National Research Council of Canada (NRC) to test the environmental benefits of biofuel use on contrails. 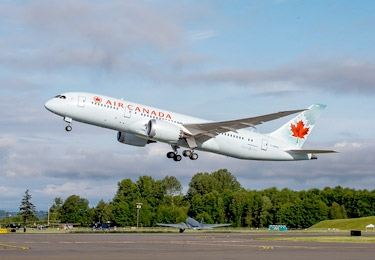 This project will use advanced sensing equipment mounted on a research aircraft operated by the NRC to measure the impact of biofuel blends on contrail formation by aircraft on five biofuel flights operated by Air Canada between Montreal and Toronto in the coming days weather permitting. During these flights the National Research Council of Canada will trail the Air Canada aircraft with a modified T-33 research jet to sample and test the contrail biofuel emissions. The sustainable biofuel is produced by AltAir Fuels from used cooking oil and supplied by SkyNRG.

“We are pleased to support Canada’s research on the additional benefits of aviation biofuel. This project is an important step in furthering the industry’s understanding of how biofuel reduces aviation’s carbon footprint and overall environmental impact,” said Teresa Ehman, Director, Environmental Affairs at Air Canada. “Air Canada recognizes its environmental responsibilities and the importance of understanding and integrating environmental considerations into our business decisions.”

“The National Research Council of Canada is proud to collaborate with our Canadian partners on this important research that will further reveal the viability of biofuels. By contributing our unique T-33 research aircraft specializing in contrail data collection and our expertise in emissions analysis, we hope to provide key information toward biofuel inclusion in all future flights,” said Jerzy Komorowski, General Manager of NRC’s Aerospace portfolio.

“We significantly improve airplane fuel efficiency through constant technology and operational improvements,” said Sheila Remes, vice president of strategy at Boeing Commercial Airplanes. “But additional efforts are required to achieve aviation’s ambitious carbon-reduction targets. Sustainable aviation fuels have the single greatest potential to reach those goals. Boeing is committed to supporting projects like this around the world to advance aviation’s knowledge and growing use of biofuel.”

A reduction in the thickness and coverage of contrails produced by the jet engines of aircraft could reduce aviation’s impact on the environment, an important beneficial effect of sustainable biofuel usage in aviation.

This project involves six stakeholder organizations, with primary funding from the Green Aviation Research and Development Network (GARDN), a non-profit organization funded by the Business-Led Network of Centres of Excellence of the Government of Canada and the Canadian aerospace industry. The project has further financial support from the NRC and the enabling support of Air Canada ground and flight operations.

Air Canada and the environment

To reduce its emissions Air Canada has adopted a four-pillar strategy that includes: the use of new technology, improved operations, infrastructure changes and the use of economic instruments. One example is Air Canada’s participation as an airline partner in Canada’s Biojet Supply Chain Initiative (CBSCI). It is a three-year collaborative project begun in 2015 with 14 stakeholder organizations to introduce 400,000 litres of sustainable aviation biofuel (biojet) into the shared fuel system at Montreal airport. The CBSCI project is a first in Canada and is aimed at creating a sustainable Canadian supply chain of biojet using renewable feedstocks.

In 2012 Air Canada operated two biofuel flights one between Toronto and Mexico City as part of a series of commercial biofuel flights that took the secretary general of ICAO to the United Nations conference on Sustainable Development held in Rio de Janeiro; the second flight transported a number of Olympic athletes and officials on their way to the London 2012 Olympic Games.

Air Canada is also investing in new aircraft. In 2016 the airline continued taking delivery of the most modern commercial aircraft now in operation – the Boeing 787 Dreamline. Initial results show these aircraft are delivering approximately 20 percent improvement in efficiency over the aircraft they replaced. Air Canada plans to introduce 37 of these new aircraft in the coming years. In addition, later this year, we will be acquiring up to 79 new Boeing 737 Max aircraft, expected to yield a 14 per cent decrease in fuel use over the most current narrow-body aircraft. In total, our aircraft investments represent a commitment of more than $11 billion at list prices.

One of Air Canada’s most notable recent accomplishment is a 40 percent improvement in average fuel efficiency between 1990 and 2016. Air Canada is taking further steps to reduce its carbon footprint including: