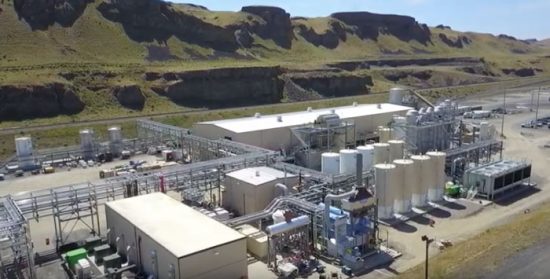 John Begley, the company’s CEO, tells Pulp & Paper Canada he anticipates the mill – located on the Lyons Ferry site outside Starbuck, Washington (two hours’ drive south of Spokane) – will be producing tree-free pulp by the end of the week.

Final commissioning of the boiler and turbine was to be completed over the weekend, and straw and chemicals will begin moving through the system over the next few days.

The site reached mechanical completion on September 16 and will be in a six-month ramp-up period before achieving its full capacity of 400 tons per day.

For feedstock, Columbia Pulp uses waste straw sourced from eastern Washington, which Begley says is one of the densest wheat-growing regions in the world. Traditionally, excess straw from a harvest has been burned, which is a major source of CO2 emissions.

“Part of what we’re doing here is eliminating that environmental impact,” says Begley. “We’re not looking to substitute or replace wood pulp, we’re looking to be a complement. As fibre becomes more and more scarce, [straw pulp] is an alternative fibre.”

The Lyons Ferry mill was originally projected to start up in October 2018, but experienced construction delays that were compounded by harsh winter weather. “That was a very aggressive and naïve forecast,” Begley says. “I don’t think we understood the complexity of what we were building. Ideally, your engineering is done before your construction, and we were doing it almost in lock step. We were getting ahead of ourselves in a couple of places and [had] to slow down and wait.”

Begley, who spent 25 years of his career at Weyerhaeuser and another 11 at Port Townsend Paper, was approached six years ago by University of Washington professors Dr. William McKean and Mark Lewis to help them commercialize and scale their process that turns wheat straw into pulp.

The straw pulp mill’s equipment and overall production process are similar to that of a traditional pulp and paper mill, except there is no recovery system. The 130,000-square-foot Lyons Ferry site has one production line anchored by a wet lap pulp machine.

The major difference is that wheat straw is a weaker fibre than wood, so the process of separating usable fibre is not as intense. “It’s more of a chemical process than a cooking process,” says Begley, “And therefore you don’t have the high-pressure boilers. Everything’s done in atmospheric conditions and at relatively low temperature. You need a kinder, gentler process rather than the severe cooking process you have when you’re making kraft pulp.”

Once processed, straw pulp has similar characteristics to hardwood pulp, with about 10 per cent longer fibres. Begley likens it to eucalyptus.

Like wood, the byproducts – which Columbia Pulp calls the bio-polymer stream – are comprised of lignin and carbohydrates. But since the chemical process doesn’t involve sulphur, the company can incorporate the bio-polymers into other industrial products for dust abatement, de-icing, fertilizer and construction.

No sulphur is an environmental win for the mill. The State of Washington has designated the site as a minor source of air emissions, and, because of its closed-loop system that allows some chemicals to be reused, the plant will not be funnelling any wastewater back into the water table. The mill also uses natural gas and is co-generating its own steam and electricity.

Ultimately, Begley expects the mill will directly employ about 120 people, with more indirect jobs in its supply chain. “Historically, this is an agricultural area that has had a high level of unemployment, and bringing in a major industrial [player] has had a major impact on the local economy,” he says.

Once product is available, Columbia Pulp’s Lyons Ferry mill will transport pulp to the Northwest U.S. and California. Begley says it’s only the beginning for the company, which is owned by Northwest Straw Pulp LLC.

“If everything goes as planned, we’ll be looking at further facilities,” says Begley. “We’re not looking to change the consumption of wood pulp. We’re looking at augmenting and complementing that industry with a fibre that has a strong, sustainable story behind it.”