March 23, 2017 - Since 2012, a small algal bioreactor has been operating quietly at St Marys Cement plant in Ontario, absorbing small volumes of C02 and other emissions from cement production to grow microalgae. In 2016, the small pilot project graduated to a full demonstration facility that is capable of churning out up to 50 kilograms of dry microalgae each day, offsetting nearly 100 kilograms of C02 emissions daily. 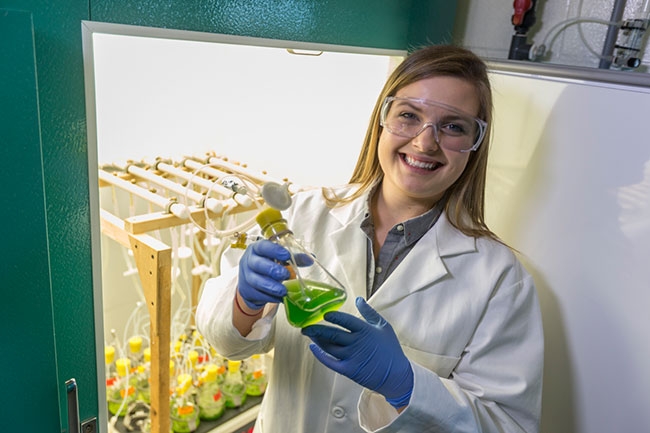 The National Research Council of Canada contributes expertise SINCE 2012

St Marys Cement was founded in 1912 as a Canadian family business in St. Marys, Ont., 170 kilometres west of Toronto. The company has since had a number of owners including Blue Circle Industries, Lafarge and its current parent company Votorantim Cimentos, which is based in Sao Paulo, Brazil.

The company is a major producer of cementitious materials in the Great Lakes Region with a capacity of more than five million tonnes per year. In addition, the company has 17 aggregate operations in Ontario (CBM Aggregates) to supply limestone and other products.

“C02 is a by-product of the cement manufacturing process and, given the scale of these operations, we have been focused on energy consumption and exploring innovative, new ways to reduce the amount of C02 we produce for a number of years,” says Bill Asselstine, vice-president of technical, sustainability and safety for Votorantim Cimentos’ North American operations.

Over the years the cement producer has reduced its emissions by improving fuel burning to heat its production process. But the algal project has, for the first time, enabled the company to offset emissions created by the chemical process of making cement.

The demonstration project uses a photobioreactor – essentially a large tank that uses light and concentrated C02 supplied directly from the cement plant to rapidly grow microalgae. Research is now underway to find ways to produce enough microalgae to create a reliable source of biofuel for the facility.

Project origin
The photobioreactor technology used in the algal project was created by Pond Technologies (then Pond Biofuels), a Canadian company that formed in 2007 to produce algae for nutrients and as a carbon capture solution. In 2012 Pond Technologies partnered with St Marys Cement to introduce the pilot algal biorefinery. The refinery is built next to the cement plant in order to receive emissions directly from the kiln of the plant.

The National Research Council of Canada (NRC) became involved as a partner in the project not long after it launched, and its scientists continue to provide operational and research expertise. Chief among those scientists is Dr. Stephen O’Leary.

O’Leary is the director of the Algal Carbon Conversion Flagship Program for the NRC, and has been involved in the NRC’s algal research activities for a decade. NRC’s expertise in algae, based in the Halifax area, began in the 1940s when scientists began to study seaweed as a source of gelling and suspending agents to meet a demand that arose during World War II. In 2008 NRC researchers switched their focus to producing biofuels from microalgae.

“What we found is that, yes, biofuel is an interesting product and environmentally relevant, but what was even more relevant was the fact that to produce the microalgal biomass required to make fuels, we needed large quantities of carbon dioxide and also forms of nutrients like phosphorus and nitrogen; and we wanted to derive those from industrial, municipal, and agricultural waste streams,” O’Leary says.

From there, in 2011, the Algal Carbon Conversion program was born and the NRC began a world-wide search for companies developing algal biorefinery technologies that would work in Canadian climates. Enter Pond Technologies and St Marys Cement.

“We knew that Pond Technologies had some experience in developing their technology for real industrial deployment. It wasn’t just something that they would make work in the lab but wouldn’t work in the real world,” O’Leary says.

From emissions to biomass
As with many other industrial processes, the conversion of limestone into cement uses heat and therefore requires fuel. “It requires an immense amount of heat and, as a result, takes a significant amount of energy to manufacture cement,” Asselstine says.

The St. Marys plant fuels its kiln primarily with coal, which accounts for about 50 per cent of its emissions, the bulk of which is C02. The other 50 per cent of C02 emissions are generated through calcination, the process by which limestone (calcium carbonate) becomes calcium silicates through the removal of carbon dioxide.

At the St. Marys plant, a pipeline has been outfitted to funnel emissions from the cement kiln directly to the algal biorefinery, which is located onsite. The gasses are then released into the photobioreactor – a 25,000-litre box-like structure filled with water and outfitted with LED lights.

Algae cultures are then introduced into the water and feed off the C02, other nutrients and bursts of light from the LEDs, causing them to multiply rapidly. Within a few days, the photobioreactor is filled with the dense microalgal biomass. Once established, that biomass can then be harvested and regrown in a continuous around-the-clock process.

NRC researchers select which strains of algae to introduce into the photobioreactor according to how well they will grow with the cement kiln’s flue gas emissions. Those emissions are mostly C02, but also contain trace quantities of sulphur oxides and nitrogen oxides.

Next step: biofuel
Algae harvested from the St. Marys plant is being used by the NRC to further research the development of biofuels and other bioproducts at NRC labs across Canada. The goal of the project at St. Marys is to recycle C02 emissions and eventually produce biofuels onsite for use in the cement-making process. As with many biomass projects, “Scaling up is the next step, but it’s a challenge,” Asselstine says.

“There are challenges to ramping it up to industrial volumes and amounts. We currently have a 25,000-litre bioreactor. It’s one thing to fill a little beaker with algae, squeeze it and get a drop of oil and it’s another thing to be producing hundreds of tons of it a day. When you get to those huge amounts of material it’s the same process but the logistics get complicated: you have store, move it, ship it and keep it flowing,” he says.

O’Leary says the challenges they face are the same for all research bodies that are studying microalgae for carbon mitigation. The demonstration stage is when researchers can determine how and if the project should scale up.

“It’s giving us data that we can use to begin to do a true empirical analysis of what this looks like at a commercial scale… what the benefit is to the carbon cycle of a commercial scale technology, and if there is an economic business case to deploy at that scale.”

The head researcher says he is optimistic that within 10 years or less the technology for producing microalgal biomass from flue gas will be commercially viable for industry partners. “We’re at the tipping point now,” he says. “Assuming that we’re not hugely disappointed with the data that we collect over the next year and a half, the next iteration of this will be small-scale commercial production within the next two or three years, and then ideally large, full-scale commercial production in five or six years.”

Asselstine confirms Votorantim Cimentos’ St Marys Cement business is in the process of evaluating much larger trials for the algal biorefinery, which could see algae produced onsite in a one million-litre photobioreactor.

“There is a wealth of opportunities that can be addressed by algae, and if we can grow it using our emissions gases than that’s fantastic, and ultimately our industry, and other industries, may be able to convert a waste product into a valuable resource,” he says.