Aug. 23, 2018 - The popularity of biogas as a renewable energy source has exponentially soared in the last few years, massively impacting Europe biogas market, according to a report by Global Market Insights. 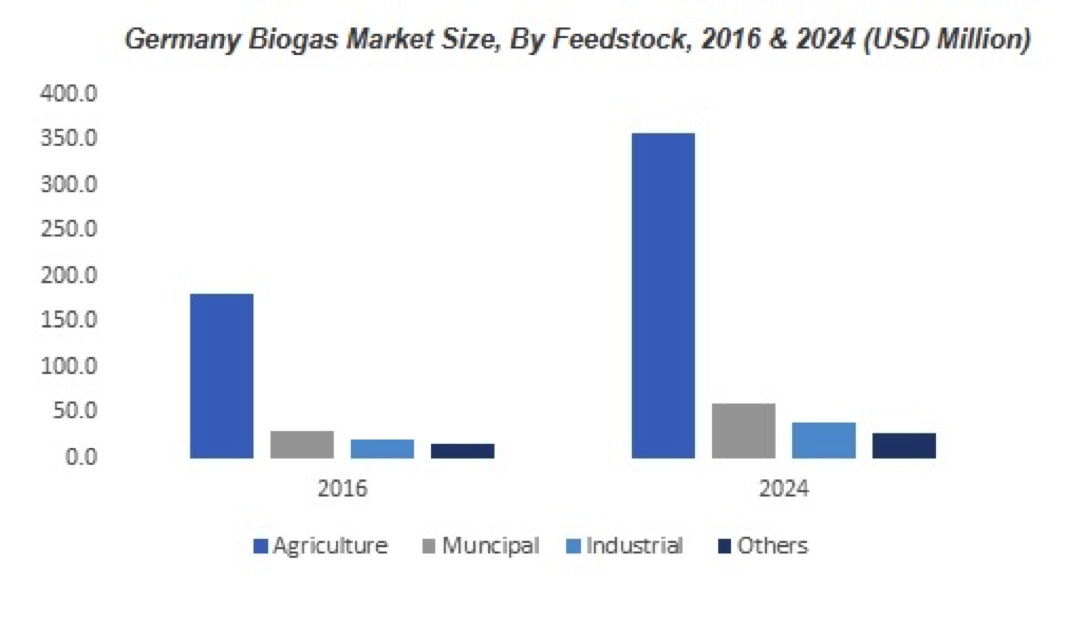 Unlike fossil fuels like oil and coal, biogas does not add to the greenhouse effect, a factor that has encouraged the European Union to undertake favourable measures for promoting the utilization of this eco-friendly fuel, providing a further stimulus to Europe biogas market. Many European countries have been relentlessly striving to curb greenhouse gas emissions in order to maintain environmental safety – for instance, Germany is planning to cut down its emissions by 40 per cent by 2020 and close to 95 per cent by 2050, under its Climate Action Program. In the U.K., Resourceful Earth Limited has made efforts to convert food waste into power through anaerobic digestion and provide energy for the town of Keynsham. These actions point in the direction of the rising awareness about the usefulness of renewable energy sources that would subsequently impact the growth of Europe biogas market, the size of which is estimated to be valued at USD 2 billion by 2024.

Among the different processes of converting biomass to energy, anaerobic digestion is one of the most convenient and eco-friendly means of conversion that has been widely adopted by the European consumers, owing to which anaerobic digestion based Europe biogas market has gained quite a momentum in recent times. Landfill gas, which was previously vented out in the atmosphere, is now being increasingly captured in the form of biogas, owing to its composition – the gas comprises 45 per cent methane and is captured through anaerobic digestion of waste at landfill sites. This advantageous recycling of waste material has added a new dimension to the waste management domain. In response, a favourable legal framework is being set in place to further harness waste management that would give a suitable boost to the overall Europe biogas industry.

Europe biogas market has been forecast to gain substantial momentum from the deployment of biogas in agriculture. As per estimates, Europe biogas industry size from agriculture is set to grow by seven per cent in the forecast period owing to the favourable government initiatives to promote biogas usage in producing crops. Feedstock material is rather convenient for the production of biogas – thus, farms can produce their own biogas from the waste produced every day from farming activities. Denmark for instance, has very efficiently made use of this technique, owing to which the country accounted for one per cent of the entire Europe biogas market share in 2016. The Danish government has realized the potential of biogas in decreasing emission and is aiming at increasing its renewable energy base by 35 per cent by 2020, an action which will propel the overall Europe biogas industry as well over 2017-2024.

As the EU has announced its intentions to cut greenhouse gas emission by 20 per cent by 2020, favourable government initiatives have been adopted all over the continent that have propelled the growth of Europe biogas market from the industrial and commercial sectors. In 2014 for instance, 14.9 million tons of oil equivalent of biogas was produced in the EU, which was mainly used for renewable electricity, heat and transport fuel production. In 2015 as well, Europe biogas market share maintained its upward trajectory, as the number of biogas production units all over Europe increased from 16,843 to 17,376 in the year. Currently, U.K., Germany and Italy are the largest producers of biogas in Europe and account for 77 per cent of the total biogas production of EU. Countries like Poland and Austria have also joined the drive to generate and utilize more biogas. This would ultimately help to achieve EU’s resolution to reduce harmful emissions by 40 per cent by 2030, eventually stimulating Europe biogas industry outlook.

The efforts undertaken by organizations like BiogasIN to bring about greater biogas awareness and utilization in Central and Eastern Europe is an apt indicator of the growth of the Europe biogas market. BiogasIN aims to utilize its expertise gathered from working with the rest of Europe to establish a sustainable biogas market in countries like Greece, Latvia, Czech Republic, Croatia, Romania, Bulgaria and Slovenia. The success of BiogasIN in establishing biogas plants in these countries and its future efforts targeted toward biogas deployment are certain to further boost the Europe biogas market.

With appreciable initiatives undertaken by governmental bodies across Europe to develop biodegradable, sustainable and renewable energy sources, it is undeniable that Europe biogas industry will chart out a lucrative growth path in the years to come. The market landscape still requires a lot of initiative especially from the governments of Central and Eastern Europe to make biogas a fuel source that can eliminate complete dependency on fossil fuels. Also, at present the technological advancements for the mass production of biogas is rather deficient. But key players across Europe biogas industry like EnviTech, Agrinz Technologies, CH4 Biogas, and Scandinavian Biogas Fuels International are working towards bringing biogas usage to the grass-root level. In the many years ahead, biogas is likely to be deployed for cooking, lighting, heat production, and much more, thus strengthening the foothold that Europe biogas market has in the global scenario.