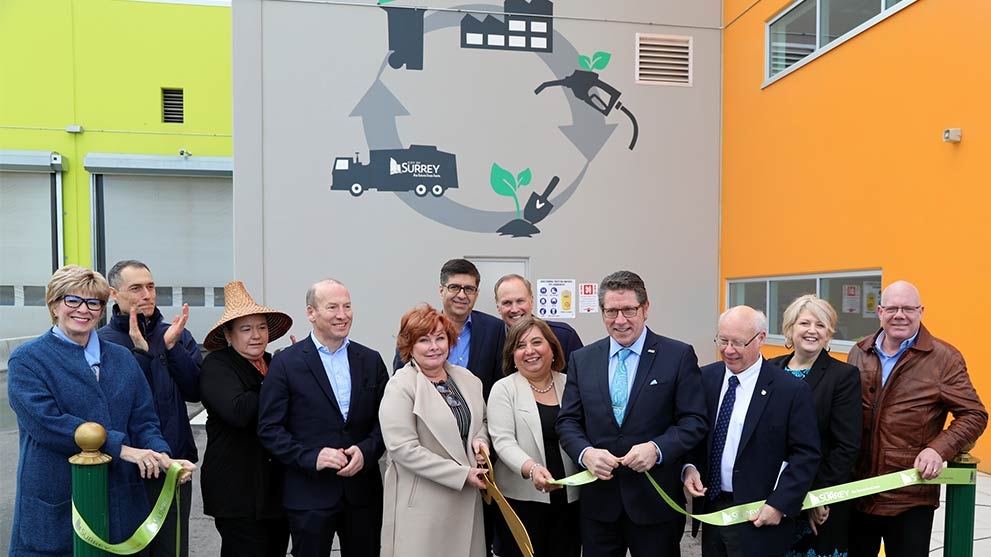 The facility will convert curbside organic waste into renewable biofuel to fuel the city’s fleet of natural gas powered waste collection and service vehicles. Under this closed-loop system, waste collection trucks will literally be collecting their fuel source at curbside. Excess fuel will go to the new district energy system that heats and cools Surrey’s City Centre.

“Surrey has established a new sustainability benchmark in Canada with a state of the art facility that converts organic waste into renewable energy,” said Mayor Linda Hepner. “The Biofuel Facility will be instrumental in reducing community-wide greenhouse gas (GHG) emissions by approximately 49,000 tonnes per year, which is the equivalent of taking over 10,000 cars off the road annually. This reduction in greenhouse gas emissions will also completely eliminate the City of Surrey’s corporate carbon footprint of 17,000 tonnes per year.”

The Biofuel Facility was designed to meet future demand. Currently, the City of Surrey collects 65,000 tonnes of organic waste per year. The processing capacity of the facility can meet a demand of 115,000 tonnes per year which the city fully expects to utilize by 2043. In the interim, the balance of organic waste will come from the commercial sector and other municipalities.

Organic waste delivered to the Biofuel Facility will be treated exclusively “in-vessel” meaning that 100 per cent of the organic waste will be contained and processed inside the facility. Integrated within the Biofuel Facility is a state-of-the-art odour mitigation technology that treats the waste odours. The end result is that odours are entirely contained within the facility.

The facility also includes an Education Centre and an outdoor interpretive compost garden that will be used for conducting school and group tours. The City of Surrey and Renewi are committed to using the facility to increase awareness of responsible waste management and the science behind composting, anaerobic digestion and the generation of biofuel.