Feb. 1, 2018 - Chief Donny Van Somer of the Kwadacha Nation can still vividly recall the moment almost seven years ago when he first began thinking about the possibility of reducing his community’s carbon footprint with renewable energy. 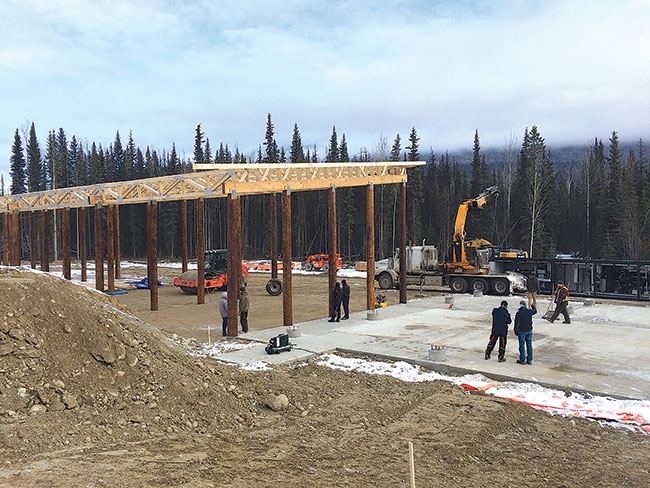 Now, after years of research, partnership-building, and hard work, that dream has become a reality, with the Kwadacha Nation the proud new operators of North America’s first wood gasification system for district energy.

The system, composed of three linked Borealis CHP biomass generators and a dryer, became operational in April last year, and will be used to provide heat to greenhouses, a local school, and electricity for the majority of the community. Each of the three units independently produces 45 kW of electricity and 108 kW of heat in the form of hot water.

“It’s hard to believe looking back, but this is a project that we have been thinking about for years now,” explains Van Somer. “I remember negotiating with a mining company on a mine that was underway in our region back around 2011, and it occurred to me then that our lands and our country deserved a greener future.”

Whatever inkling Van Somer might have had then about what such a future might look like, he admits he still had much to learn about the effort required to realize it.

From fossil fuels to fast friends
Located in Fort Ware, B.C., the Kwadacha Nation is an off-the-grid remote community more than 570 kilometres north of Prince George. Home of the Tsek’ene people, the community has an estimated population of 380, and approximately 80 homes. Due to its remote location, the community has traditionally relied on costly diesel generators to provide electricity, and propane for heat.

Looking for sustainable, green initiatives that might help to reduce their ecological footprint, the Kwadacha council quickly identified reduced reliance on greenhouse gas-producing diesel and propane as a priority. From there, the question became how an off-the-grid community might achieve such a goal.

“We began consulting with some people associated with some of Canada’s green initiatives, and researching what it would take to make our community greener from an energy perspective,” explains Van Somer.

While Chief Van Somer and the Kwadacha council were looking for the kind of technology and innovation that could provide their community with reliable and sustainable energy at an affordable price, Dale Thomas, director of operations, and the team at Borealis Wood Power Corp., were busy looking for their first major biomass project in Canada.

Founded in 2012, Borealis is the exclusive distributor of the Borealis CHP generator, a 45kW combined heat and power (CHP) wood gasification system developed and manufactured by German-based Spanner Re2 GmbH, a longtime supplier of biomass heat and power systems in both Europe and Japan.

With exclusive Canadian rights to Spanner’s technology – which utilizes modular, pre-assembled units that can be linked up to provide additional power – Borealis caught the attention of Van Somer and the Kwadacha council.

“It took us almost two years of research before we discovered Spanner and their technology,” says Van Somer, “and it was at that point that we linked up with Dale and Borealis. For us, the Borealis unit, which burns dry wood, made a lot of sense, especially after the big epidemic of pine beetle generated so much biomass in the region. We also liked Borealis because they’re smaller units, but you can go as big as you want by linking multiple units in tandem, which was appealing to us.”

Following a visit in 2014 to a Borealis facility in Burlington, Ont., where a running demonstration had been set up, it became clear to Van Somer and council that they had the technology they were looking for.

“It really began with the Kwadacha Nation, and Fort Ware,” says Thomas, reflecting on the beginnings of their successful partnership. “They were actually our first project, and one of the first groups that we talked with.”

There are more than 650 installations using this technology around the world with more than 15 million operating hours. The Borealis units can be containerized or installed into an existing building and are flexible enough to meet a range of needs. There is also progress on using the gasification unit to supplement diesel in regular diesel systems, and even a smaller and more compact unit that produces 9kW of electricity and 22kW of heat.

Fighting for funding
With the question of which technology to pursue now settled, the next challenge for the Kwadacha Nation was engaging likeminded stakeholders to secure funding and support for the project.

As Van Somer soon found out, this was no easy process, particularly when it came to working with important provincial allies like BC Hydro.

“It was initially a challenge for us getting BC Hydro to buy in,” he explains. “With their Remote Community Electrification Program, they’re mandated to provide off-the-grid communities like ours with BC power, which typically means running these communities off diesel. That obviously went against the grain of what we were trying to do.”

Making matters more complicated, the project represented the first ever use of Spanner’s technology in North America, as well as the first time a wood gasifier of this size had been installed on a community micro-grid. Undeterred, Van Somer and the rest of council worked hard to educate potential partners, and after years of negotiations, secured a two-year Electricity Purchasing Agreement (EPA) to sell electricity to BC Hydro starting in January 2016.

“It took us about four years,” Van Somer concedes, “but we knew we weren’t going to quit.”

Building off the momentum of their EPA with BC Hydro, the Kwadacha Nation went on to secure a long list of funding partners for the project, including the Fraser Basin Council, Indigenous and Northern Affairs Canada, Natural Resources Canada’s Indigenous Forestry Initiative, and the Province of British Columbia’s Community Energy Leadership Program, among others.

The future arrives
Construction began on the project in the summer of 2016, with early work focused on preparing BC Hydro’s district energy lines to run hot water from the existing generating station to the new installation.

The system itself – comprising three linked Borealis CHP generators, and shipped in a custom container fashioned from connecting three shipping containers – was assembled in Germany during that same summer, and arrived in Fort Ware in October 2016. The modular, pre-assembled nature of Spanner’s technology made for easy installation once the product arrived.

“It made it a lot easier to do in a remote community like Fort Ware,” Thomas notes. “It only took us about a day to do all the hard line connections in the container itself, which then left us to connect the technology to the district energy lines and wood supply.”

Construction was completed in March, with the facility beginning commercial operation the following month. As part of the purchase agreement, Spanner and Borealis technicians provided three months of site training for all local operators.

In addition to the jobs created by construction and the need for permanent operators, the facility should also prove to be a boon for local forestry outfits. The technology runs using natural wood chips with a G30-G40 size category and a maximum humidity of 15 per cent, which makes the abundance of standing dead pine in the area an ideal source of fuel. A timber supply analysis conducted by the Kwadacha Nation found that there are almost four million cubic metres of available volume within 30 kilometres of Fort Ware and 500 metres of an existing road, representing over 400 years of supply.

Thomas spent several weeks in Fort Ware and says he was impressed with the ingenuity and resourcefulness of community members who have been operating the units since March. “The skills in Fort Ware adapt well to the Spanner Re2 system. With a strong mechanical ability and common sense these systems don’t need to be operated by specialists from afar,” he says.

Both the Kwadacha Nation and Borealis believe this project is bigger than just a single community, and may serve as an example for other remote communities looking to reduce their reliance on fossil fuels.

“There’s huge potential here in Canada,” says Thomas, who hopes to see Spanner’s technology become a common sight across the country. “We certainly have the biomass capability, and we’ve seen how far the technology has come.”

Van Somer, for all that he knows about how challenging such a project can prove, couldn’t agree more. “It’s important for all of us to think of better ways to generate and use energy in our communities, both here and across the country,” he says.