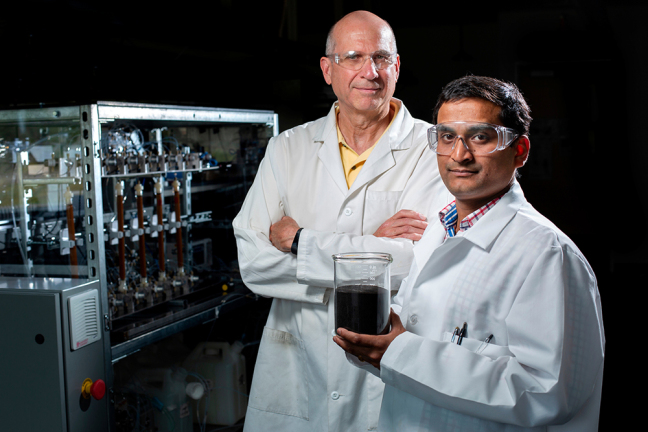 Robert C. Brown and Santanu Bakshi, left to right, are part of a team looking for ways to make biochar -- a black powder that's a co-product of bio-oil production - more useful and valuable. Photo by Christopher Gannon.

Iowa State University researchers weren’t looking for a slow-release fertilizer that could feed crops while protecting water quality, but they may have found one.

Researchers looking to add value to biochar – a solid, porous co-product of heating corn stalks and other sources of biomass to produce liquid bio-oil in a process called pyrolysis – were studying its physical and chemical properties.

“We’ve calculated biochar’s incredible ability to store carbon in a small package,” said Robert C. Brown, director of Iowa State’s Bioeconomy Institute. “One day it might be valued at $200 per ton for its ability to remove carbon from the atmosphere, but currently it’s only worth about $40 per ton – the energy value of burning it as a coal substitute.”

So, what could add value to this black powder, making pyrolysis a more economically attractive biofuel technology?

A research team led by Brown – who’s also an Anson Marston Distinguished Professor in Engineering and the Gary and Donna Hoover Chair in Mechanical Engineering – won a two-year, $1,469,448 grant to find valuable applications for biochar. The grant is from the Biomass Research and Development Initiative, a joint program of the U.S. Departments of Agriculture and Energy.

Biochar as a sponge

The grant put Santanu Bakshi, an assistant scientist at the Bioeconomy Institute, to work on yet another biochar project. He’s worked with the material for most of the decade, starting as a doctoral student at the University of Florida looking into how biochar could be used to reduce copper toxicity in the soils supporting citrus groves. In another project, Bakshi showed the effectiveness of biochar in removing arsenic from drinking water.

That led to biochar projects, including arsenic sticking – adsorbing – to the surface of biochar and another that involved capturing phosphorous from wastewater.

As often happens during research, all those projects built on each other to produce a new discovery. Bakshi discovered that biochar produced from biomass pretreated with iron sulfate, an inexpensive byproduct of steel making, can adsorb to its surface up to 12 times the phosphate as biochar from untreated biomass.

The iron sulfate pretreatment developed at Iowa State was designed to increase the yield of sugar from pyrolysis of woody and grassy biomass. Like starch from corn, this sugar can be fermented to produce biofuels.

But the pretreatment also boosted biochar performance in another important way.

Biochar’s surface mostly holds negative charges. And so does phosphate – an anion that has more negatively charged electrons than positively charged protons. The two should repel each other. But, when biomass is treated with iron sulfate before pyrolysis, the surface of biochar is modified so it can readily adsorb anions to its surface.

And so, biochar could be mixed with manure to adsorb phosphate – a major plant nutrient – and then applied to soil as a solid fertilizer.

“With this technology, we’re trying to improve the recycling of phosphates to the soil,” Bakshi said.

The application of nutrients via biochar – unlike some fertilizers used today – is stable in the soil and won’t wash away in the rain or leach into groundwater. That could improve the quality of water running off farm fields, decreasing the nutrients that feed algal blooms that take up oxygen in water, helping to create the Gulf of Mexico’s “dead zone.”

By oxidizing the iron in the pretreatment process, Bakshi said even more phosphate can be adsorbed and released, nearly 23 milligrams per kilogram of soil after three hours of leaching with water.

“Phosphate adsorbed on biochar can provide the phosphorous needed by crops,” Bakshi said. “But being less soluble in water than conventional fertilizer means the phosphorous will remain in the fields during rainstorms rather than being washed away.”

There will also be greenhouse tests with potted crop plants and eventually field tests.

“This might change how farmers apply fertilizer treatments,” Brown said.

And that idea wasn’t even in the researchers’ successful grant proposal.

“This is so typical of research,” Brown said. “You come up with something you didn’t even expect – and here we have a form of charcoal that could be used as slow-release fertilizer.”