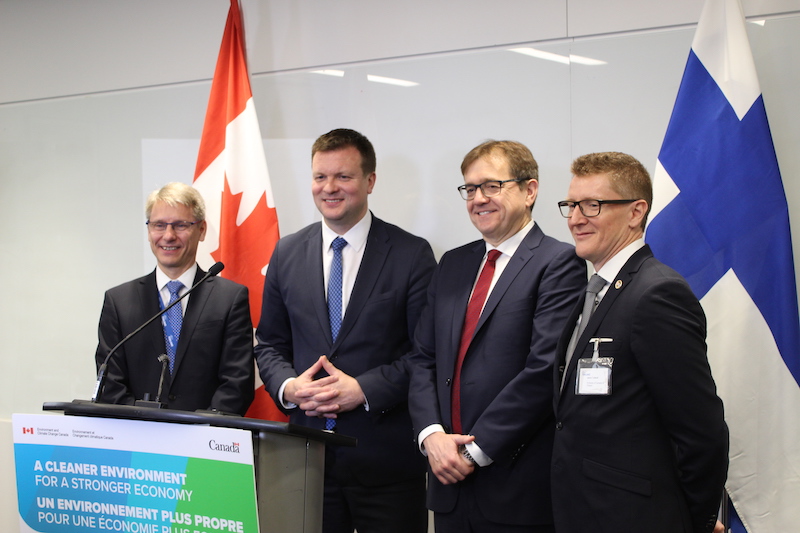 From left to right: Roy Eriksson, ambassador of Finland to Canada; Ville Skinnari, minister for development, cooperation and foreign trade of Finland; Jonathan Wilkinson, Canadian minister of environment and climate change; and Jason Tolland, ambassador of Canada to Finland.

In the fight against climate change, developing a circular economy is key. Nordic countries are leading the way, and Finland is no exception. The country wants to “lead by example,” Ville Skinnari, Finland’s minister for development cooperation and foreign trade, told an audience of approximately 50 at a networking seminar on Dec. 2 in Toronto. The seminar, called “Business in circular economy is cool,” aimed to combine Finnish and Canadian experience in this sector to boost the economy.

Speakers at the event included newly-appointed Canadian minister of environment and climate change Jonathan Wilkinson, the ambassador of Finland to Canada, the Honorary Consul of Finland in Toronto, members of Business Finland, and representatives from Canada’s bioenergy and forestry industries.

The event marked the official opening of Business Finland in Canada. Business Finland is a Finnish government-backed organization dedicated to promoting trade, research and development, business investments and tourism.

The main idea behind opening a Business Finland office in Canada is to “work together, co-innovate and collaborate,” said Risto Vuohelainen, COO and executive director of global network for Business Finland.

Collaboration, in fact, was the theme of the day.

In his keynote speech, Skinnari discussed Finland’s efforts to develop a circular economy, implementing the first national circular economy policy in 2016. The Finnish government is committed to raising funds for businesses to enhance business-run research and development, and collaboration with the public, he explained.

The country aims to be carbon neutral by 2035. This, Skinnari said, is “feasible, doable, but we have to be very strategic.” Part of that strategy is working closely with businesses and people, as well as other like-minded countries, like Canada.

“My message to Canada is everything is possible, but it has to be done together,” he said.

Wilkinson echoed this sentiment in his keynote speech, hitting upon the values – and love of hockey – that Finland and Canada share.

Building a circular economy is a crucial part of Canada’s climate action, he said. In fact, Canada will host the World Circular Economy Forum from Sept. 29 – Oct. 1, 2020, in Toronto – the first time it will be held in North America, Wilkinson announced. The event “will bring together leaders to find solutions and develop the circular economy.

Wilkinson also noted that “building a circular economy will not be possible without the active participation of businesses.”

“Taking action means working together,” he said. “That is why events like today are necessary.” 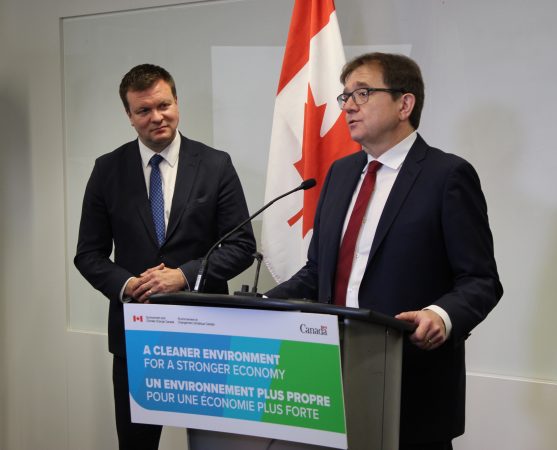 ‘Be where the puck is going’

A panel discussion on the importance of the circular economy, moderated by David Hughes, president and CEO of the Natural Step and Canada executive co-chair of the Circular Economy Leadership Coalition, followed. Melissa Mirowski, country sustainability manager at IKEA, Mike Sulkinoja, senior lead of the carbon-neutral circular economy for SITRA, the Finnish Innovation Fund, and Mike Wilson, executive director of the Smart Prosperity Institute, joined Skinnari and shared their experiences engaging in the circular economy.

A common theme among the panelists was the importance of raising public awareness about the circular economy.

But in Canada, the term ‘circular economy’ is virtually unknown, Hughes noted. A circular economy can broadly be defined as an economy that tries to eliminate waste by reusing everything that is produced.

Hughes asked Skinnari to share some lessons Finland has learned in its work developing a circular economy.

In Finland, municipalities at the local level began working with businesses, institutes and entities like SITRA, a parliament-owned research entity and independent fund, Skinnari responded. Working at the national, regional and local levels is key.

Countries like Canada and Finland also need to “lead by example,” he said.

“We have to be holistic in order to define the whole platform,” he said. “Businesses also understand that there are great opportunities within the circular economy.”

The other panelists agreed that the circular economy presents massive economic opportunities. “By 2050, the increase in global GDP would reach $2 trillion,” Sulkinoja shared.

But to get society and business involved, “You’ve got to be where the puck is going, not where the puck is now,” Wilson said, quoting Wayne Gretzky. The circular economy has so far been led by businesses, so government needs to be cautious in their involvement. He argued that government shouldn’t prescribe policies, but should work with business to set policy and determine the future expectations on natural resources.

But in order to get public buy-in, incentives are needed. Sulkinoja suggested implementing taxes on raw materials and fewer taxes on recycled material, for example. Business models, such as the Beer Store’s bottle and can recycling program, are also important.

However, “we have to be careful about the way we design these incentives,” Wilson said. “Economically, they work great, but politically, they can be difficult. We have to do it really wisely and collaboratively.” 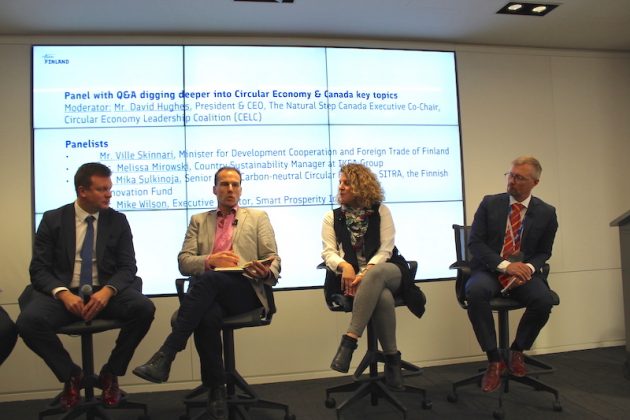 The second half of the day was split into two workshops: “Climate Smart Forestry – The Finnish Experience and Options for Ontario,” and, “The Circular Economy: Strategies for Reaching 99 per cent Landfill Diversion.”

Canadian Biomass attended the workshop on the circular economy, which started with a presentation from Helena Saren, head of Business Finland’s smart energy program, on Finland’s efforts towards carbon neutrality.

The global market for bioenergy in 2018 was U.S. $18.3 billion, Saren shared. That is projected to grow to $26.1 billion in 2020. In Finland in particular, 19 per cent of the country’s electricity generation comes from biomass. Only one per cent of the country’s municipal solid waste ends up in landfills, thanks to a number of waste-to-energy (WtE) plants. The country also uses district heating and cooling systems, with 76 per cent of heat produced by CHP.

The city’s solid waste management services division in particular is working on “closing the loop” with renewable natural gas (RNG). “We are able to take a circular lens to infrastructure and identify where a closed loop might be possible,” Davis explained.

For example, in early 2020, the city’s first RNG facility will be commissioned at the Dufferin Solid Waste Management Facility. 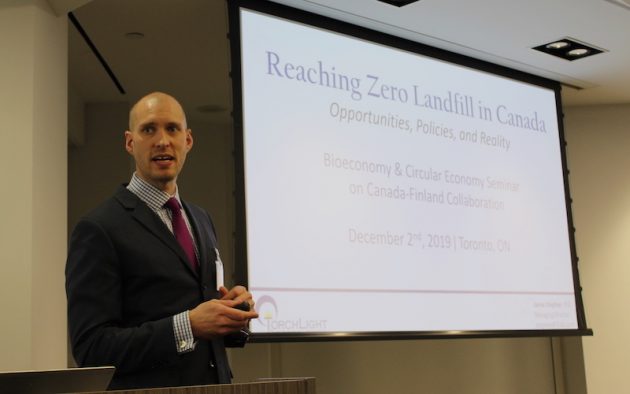 Despite these efforts, Canada as a whole is far behind when it comes to waste management, Jamie Stephen, Ph.D., managing director of TorchLight Bioresources, shared in his presentation.

“Ninety-nine per cent waste management is absolutely possible,” he said. “But it’s not possible without WtE plants.”

By 2050, WtE will exceed landfilling globally, Stephen said. District energy systems are also on the rise. In Copenhagen, for example, 99 per cent of buildings are connected to a district energy system, and it is illegal for anyone to have their own boiler or furnace. Waste-to-energy plants in Copenhagen have lower emissions than boilers or furnaces, thanks to flue gas cleaning systems, he explained.

“This is our missing infrastructure for decarbonizing our cities,” he said.