Nov. 13, 2017 - The Northern Alberta Institute of Technology (NAIT) is partnering with industry to develop a new technology that will enable long-haul trucks to use low-carbon fuel. 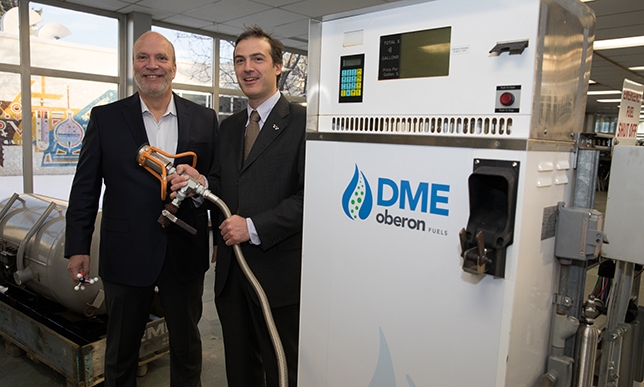 NAIT researchers in the School of Applied Sciences and Technology have partnered with Mack Trucks, Oberon Fuels and Westcan Bulk Transport to develop a technology that manages moisture for dimethyl ether (DME) – an alternative to diesel fuel made from either natural gas or biomethanol. The technology will remove any residual water from the fuel before it enters the engine, which would mitigate corrosion and low performance.

The research is funded by $368,000 from the Alberta Ministry of Economic Development and Trade.

“As a leading polytechnic, NAIT supports applied research and technology-based education in areas critical to Alberta – a primary focus being the energy sector. Alberta, and the world, are moving toward a low-carbon future. Support from the Government of Alberta allows NAIT to work in partnership with industry to create this future,” Glenn Feltham, NAIT president and CEO, said in a news release.

Researchers plan to test the technology on Mack trucks from Westcan’s fleet travelling Highway 2 between Edmonton and Calgary.

“Oberon’s efforts to develop a new global transportation fuel have been accelerated by the support and participation of such forward-looking companies who are committed to sustainable transportation. Alberta is leading the way by investing in DME, one of the few truly carbon-negative fuels available, and the only one that can deliver the power needed for heavy-duty applications,” Rebecca Boudreaux, president of Oberon Fuels, said in the release.