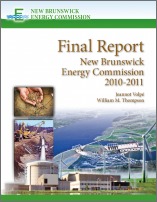 May 25, 2011, Fredericton, NB – The New
Brunswick government has received the New Brunswick Energy Commission’s final
report, which details more than 50 recommendations focused upon developing a
10-year energy plan. The report includes such recommendations as pursuing
biomass combined heat and power, developing a residential pellet system as a
priority, and reviewing the potential of biomass district heating.

Co-chairs Jeannot Volpé and William
Thompson prepared the final document after receiving input from those who
attended public or stakeholder meetings, made presentations, provided written
and online input, or participated in dialogue sessions over the past six
months. This first phase was followed by a feedback document released in April
2011 that provided an opportunity for more input during the past month. During
this part of the process, the commission received another 200 responses from
the public and stakeholders.

"We will now move forward with many of
the recommendations in the report and will commence the necessary analysis of
others that will require a longer timeframe to review,” says Energy Minister
Craig Leonard. “Some are more complex than others and will take additional time
to examine to understand clearly all of the costs and ramifications."

The provincial government created the New Brunswick Energy Commission with a
mandate to conduct a broad public consultation and report to government on a
long-term energy plan. The commission has now completed its work. The final
report and more information on its mandate are available online at
www.gnb.ca/energycommission.