November 17, 2015 – Glenn Miller, a professor in the College of Agriculture, Biotechnology and Natural Resources, is leading a project at the University of Nevada, Reno to convert roadside gumweed into biofuel, which could help contribute to fuel supplies for the military. 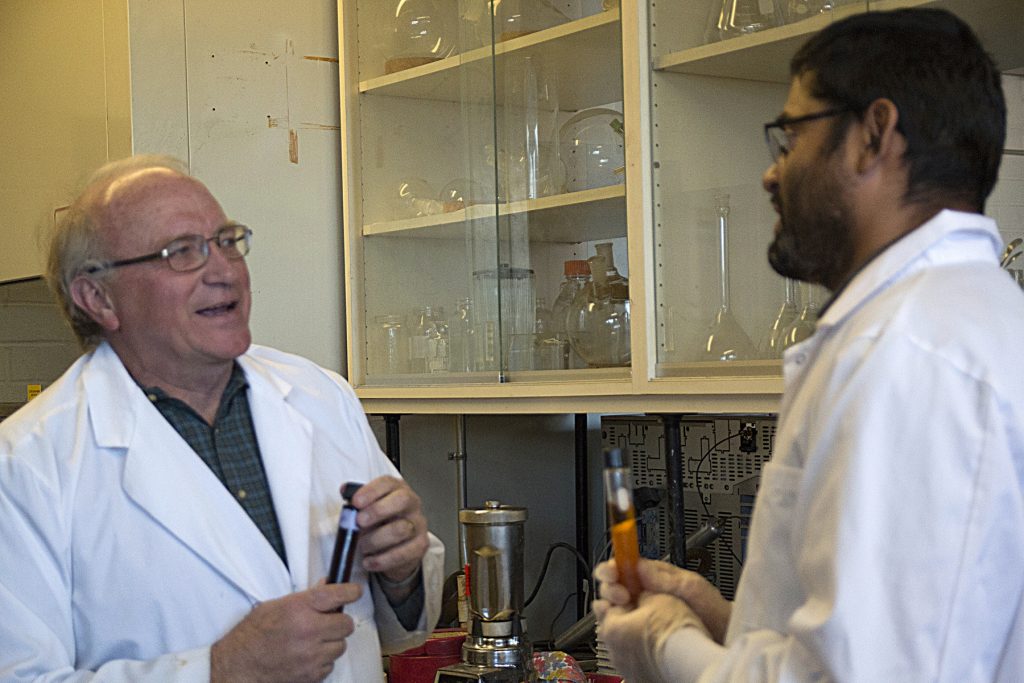 Glenn Miller and Bishnu Neupane holding the final biofuel product based on the gumweed plant. The fluids in the tubes have been diluted at different levels and are being examined in the labs at the Applied research Facility at the University of Nevada main campus.

“The plant grindelia squarosa, known as curly top gumweed, has extractable hydrocarbons with the potential use as a biodiesel or biomaterials crop,” said Miller. “Gumweed is native in Nevada and grows on the side of freeways and, more importantly, is an arid land crop that requires less water than other substitutes like alfalfa. Alfalfa takes five feet of water to grow while gumweed uses no more than a foot of water.”

The collaborators on the project planted the gumweed at the University’s Valley Road Field Laboratory and the Main Station Field Laboratory using minimal water and fertilizer resources. After growing and harvesting the gumweed, it went through biomass processing where it was broken down to liquid that smells like tar.

“We are looking at breaking it down because it uses less water and it’s already acclimated to Nevada conditions,” Miller said. “It would be beneficial generating this arid-land crop because it doesn’t compete with food or animal feed. The primary resource for diesel fuel is soy beans and ethanol for corn which are always in direct competition with food.”

The final biofuel product from the chemical engineering process can produce up to 122 gallons per acre on a biennial basis on the semi-arid lands of Nevada. The crops would require minimum inputs of nutrients and water and have the potential to be converted into jet fuel, which has garnered the interest from the military – the largest fuel consumer in the United States.

Miller said the U.S. Navy is interested in using the biofuel as jet fuel. The project received $500,000 in grant funding from the United States Department of Agriculture and has the potential to supply up to 20 percent of fuel demand for the military.

“It is estimated that if even 10 per cent of sagebrush-covered lands in Nevada are used to grow gumweed for aviation biofuels, 400 to 600 million gallons per year of jet biofuels could be produced,” said Hongfei Lin, a collaborator from the university’s College of Engineering. “That’s definitely incredible. There’s lots of potential.”

Lin, a professor of chemical and materials engineering is working on the project with Miller to identify a catalyst that can be used to convert biomass into fuel using an unconventional approach to biofuel production. Instead of adding hydrogen to biomass, Lin is exploring a more cost-effective manner using an oxidation process.

In nature, oxidation occurs when substances come in contact with oxygen molecules. For example, oxidation occurs when a freshly cut apple turns brown, a bicycle fender becomes rusty or a copper penny turns green. Lin is trying to mimic the natural process for biomass deconstruction when converting the gumweed into biomatter for jet fuel.

Lin will be speaking at the American Institute of Chemical Engineers Annual Meeting in Salt Lake City, Utah, where the group’s project is being presented. AIChE is the world’s leading organization for chemical engineering professionals which promotes excellence and advancement in the practice.

“The efforts of Dr. Miller and his colleagues to develop new generation biofuels from gumweed and other Nevada plant species are well aligned with our efforts to establish CABNR and NAES as world leaders in sustainable dryland agriculture,” said Bill Payne, dean of the College of Agriculture, Biochemistry, and Natural Resources. “Today’s historically low oil prices cannot last indefinitely and will eventually once again rise due to policy, limited supply, or other factors. As prices once again reach $80 or more per barrel, this type of technology will look increasingly attractive to an industrial world struggling to reduce its carbon emissions.”