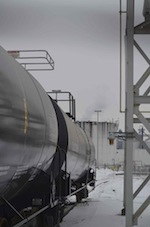 December 20, 2013, Hamilton, Ont. – Sit down with Scott Lewis from Biox and it becomes clear that there is reason for excitement at the company’s facility at the Port of Hamilton.

December 20, 2013, Hamilton, Ont. – Sit down with Scott
Lewis from Biox and it becomes clear that there is reason for excitement at the
company’s facility at the Port of Hamilton.

The company recently completed a pipeline that provides a
direct link to one of its best customers and next-door neighbour, Shell. The
company uses the port as a major hub for the distribution of its petroleum
products throughout southern Ontario. With the partnership formed with Biox,
and the pipeline built, it can now blend biodiesel on the Hamilton site.

That domestic partnership, one that allows a portion of the
sale of Biox’s 67 million-litre annual biodiesel production to include such
minimal logistics costs, could be the key for Biox moving forward.

Ontario’s improved
renewable fuel standard has been in the works for years. All political parties
are seemingly on board with increasing the province’s renewable fuel mandate.

While politics impedes the progress of a new standard, Biox
continues to work with customers both here in Canada and south of the border.
When the new standard is introduced in Ontario, Biox’s neighbour should be
looking for more biodiesel to come down the pipe.

For more on Biox, check out the January/February edition of Canadian Biomass magazine.