April 3, 2019 - After 25 years in the wood pellet industry, Staffan Melin, the Wood Pellet Association of Canada’s director of research, has retired effective March 31, 2019. 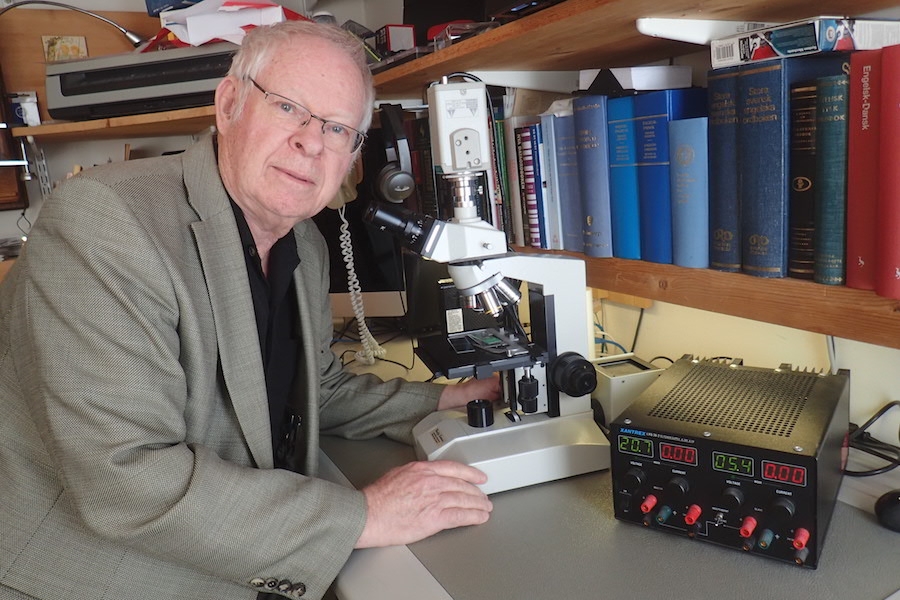 Melin’s career in the wood pellets industry was preceded by five years as a trade commissioner for the government of Sweden in Canada during which time he developed relationships that resulted in the first wood pellet exports from Canada to Europe.

In 1996, Melin started the company Delta Research Corporation with the objective of developing renewable energy trade between Canada and Sweden. That same year, Melin began his relationship with the BC Pellet Fuel Manufacturers Association, which eventually became the Wood Pellet Association of Canada.

Melin partnered with another industry pioneer, John Swaan, the founder of Pellet Flame – now known as Pacific BioEnergy Corporation. Swaan’s expertise lay in wood pellet manufacturing, while Melin brought knowledge of ocean transportation and connections with Swedish customers. In 1996 they shipped their first export vessel to Helsingborg Energi AB to be co-fired with coal, pioneering the hugely successful Trans-Atlantic wood pellet trade we all enjoy today. Melin and Swaan were the first to ship wood pellets from Prince Rupert to the Panama Canal, through tropical waters in the Caribbean Sea and the cold North Sea to Sweden.

Beginning in year 2000, over a period of 18 months, Melin negotiated the first ever long-term wood pellet sales agreement with Essent Energie BV to supply wood pellets to Essent’s Amer coal power plant in the Netherlands, thus initiating Dutch wood pellet co-firing. In addition, from 2002 to 2007, Melin managed wood pellet exports for Vanderhoof, B.C.-based Premium Pellet Ltd. – including contract negotiation, chartering of ocean vessels, draft surveys, laboratory testing and shipping documentation for deliveries of 45 vessels to the Netherlands, Sweden and Denmark – a value in excess of $50 million.

A fatal accident on board the vessel MV Weaver Arrow on May 9, 2002 in Rotterdam became a milestone event, which initiated Melin’s engagement in safety, handling, and storage of wood pellets. Melin developed standard documentation for wood pellet handling and shipping which was ultimately adopted the International Marine Organization to be used by all wood pellet shippers. Melin also developed guidelines for safe shipping of wood pellets including the first internationally accepted material safety data sheet.

During his investigation of the MV Weaver incident, Melin met Dr. Shahab Sokhansanj, a chemical engineer and recently retired university professor. The two decided to research how carbon monoxide is generated by wood pellets in combination with oxygen depletion. They approached the University of British Columbia’s Department of Chemical and Biological Engineering and were encouraged to initiate the Biomass and Bioenergy Research Group (BBRG) within that department. Under Melin and Sokhansaj’s leadership, BBRG has produced more than 100 scientific papers and has trained more than 20 students who graduated with masters and Ph.D. degrees. Based on his wood pellet industry experience, Melin conceived much of the research. The results of this research have shaped the progress in the pellet industry in areas such as product quality assurance, testing methods, safety in handling and storage as well as raw material logistics. Signature research achievements include determination of off-gassing and oxygen depletion, permeability and thermal conductivity of wood pellets in bulk, modelling and validation of explosion pulping and torrefaction as well as gas migration in enclosed vessels containing wood pellets.

Since 2008, Melin has been a leader in developing ISO standards for wood pellets, covering quality, chemical and mechanical testing, and safety. Nearly all global wood pellet trade is based on these ISO standards.

In 2006-2008, Melin conducted a study onboard the ocean vessel MV Horizon in close collaboration with Chalmers Technical University and the Department Occupational and Environmental Medicine at Sundsvall Hospital of Sweden. Their objective was to explore the thermal conditions and gas evolution in a ship-hold during a seven-week voyage from British Columbia to Helsingborg, Sweden. During the study they discovered the previously unknown phenomenon of barometric pumping which causes condensation of moisture in ship-holds. The study also confirmed the thermal coupling between wood pellets and ocean water temperature.

From 2007 to 2010, Melin co-operated with the Swedish Research Institute on developing guidelines for extinguishing fires in storage silos. Together they developed procedures for using nitrogen for fire fighting.

During the period 2009-2011, Melin participated as part of the WorleyParsons engineering team responsible for investigating the conversion of power plants owned by Ontario Power Generation from coal to biomass. Ultimately two plants – Atikokan and Thunder Bay – were converted to using wood pellet fuel.

In 2013 Melin conducted the study “Considerations for Grading Agricultural Residue” for the Ontario Federation of Agriculture. The report describes pre-treatment options such as weathering, washing, torrefaction, steam-treatment and hydrothermal carbonization to maximize commercial value, including quality certification schemes.

In 2017-2018 Melin undertook a study to explore if wood pellets comply with the International Plant Protection Convention (IPPC) for phytosanitary certification. His study evaluated performance of high-temperature (rotary drum) and low-temperature (belt) dryers and found that Canadian wood pellets are sterile. However, feedstock materials are heavily contaminated with mold, yeast and bacteria. This study is today used as evidence to responding to foreign customer and government inquiries regarding the phytosanitary nature of Canadian wood pellets.

Over his career, Melin has authored or co-authored more than 80 scientific papers, reports and books on biomass processing, safety, logistics, and international trade.

Melin has had a remarkable career. During the mid-1990s when the Canadian wood pellet industry was struggling to survive, Melin’s pioneering of the trans-Atlantic pellet trade transformed the industry. Not only was Melin a visionary entrepreneur, he also distinguished himself as a leading scientific expert on all aspects of wood pellets. We wish him all the best in a well-deserved retirement.

Gordon Murray is the executive director of the Wood Pellet Association of Canada. www.pellet.org.