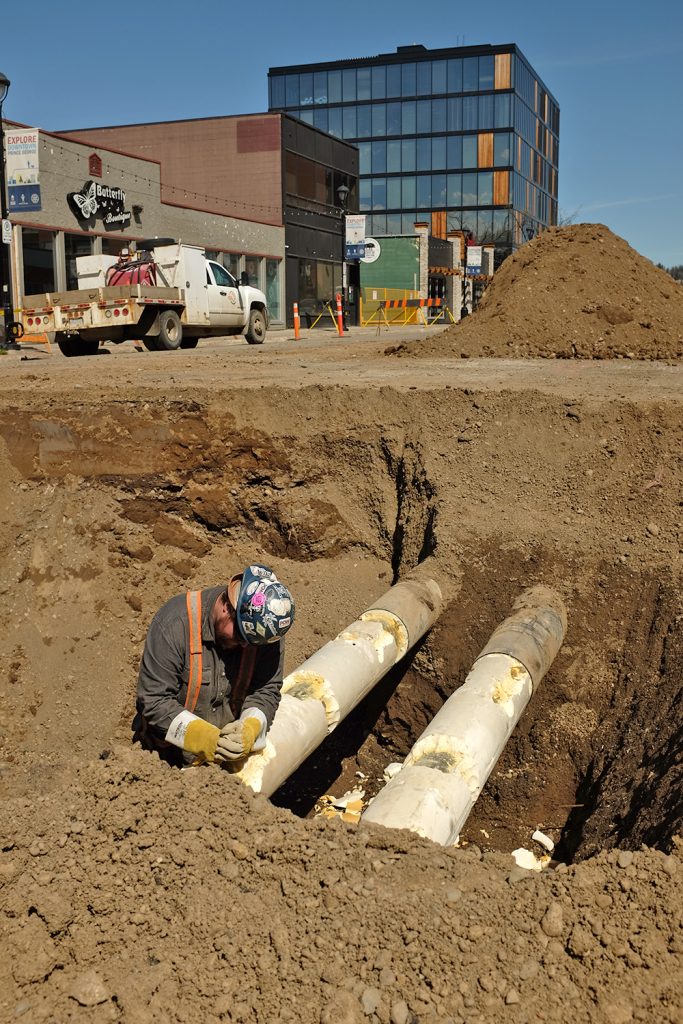 Construction started today on an expansion to Prince George’s Downtown Renewable Energy System that will serve the new parkade across from City Hall and the future new pool at 7th and Quebec.

The system currently delivers heat from Lakeland Mills to nearly a dozen downtown buildings through nearly three kilometres of underground pipes. New connections to these pipes will be added over the next few days.

The pipes are steel, eight inches in diameter, and wrapped in insulation. The hot water flowing inside of them can currently carry up to five megawatts worth of heat energy. To put that into perspective, this past winter, when temperatures dipped to -44 degrees Celcius, the amount of energy needed to heat all of the buildings already connected to the system – such as City Hall, the library, art gallery, and the Wood Innovation and Design Centre – amounted to 2.4 megawatts. Half of the current capacity!

Sawmill residue (often referred to as “wood waste”) from Lakeland Mills is burned to heat the water that is circulated through the piping system. This means that the source of energy is renewable and produces low greenhouse gas emissions. In fact, by connecting to the Downtown Renewable Energy System, the new downtown pool will produce nearly 95 per cent fewer greenhouse gas emissions than if it was heated with natural gas. And money spent on heating stays in the local economy.

After the work on the district energy system is complete, the new entrance to the downtown parkade will be paved. The first residents of the Parkhouse condo project are scheduled to move in one month from now.

More information about the downtown renewable energy system is available on the Prince George City website.