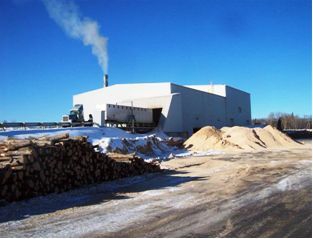 Rene Landry, director of pellet operations, says the certification is another step as Shaw Resources strives to be a world-class producer.

“We’re not the biggest producer out there, but we understand the importance of SBP to the utility and to the industry to establish credibility and to prove that wood pellets are a renewable source of energy with carbon benefits,” Landry said.

The Belledune industrial pellet plant was built in 2007 and began operating in 2008. The plant uses hardwood and softwood species sourced from local sawmills as well as processed roundwood. Belledune became officially SBP certified on Oct. 20, after a certification process by PwC that began in January.

The SBP scheme is relatively new – it launched in March 2015 – so there was an evolution to the process, Landry said.

“It was a lot of hard work because it was so new to everybody – new to the certification scheme, new to the certifying body [PwC] and new to us,” he said. Support from their suppliers was an important component.

The plant has also recently received PEFC Chain of Custody certification, which was factored in during the SBP process.

Landry says he expects other Canadian producers are in the process of getting certified or will be soon.

“From the utilities standpoint, if you’re going to be doing business you need to be SBP certified,” Landry said. “The key is credibility of the industry and ultimately proving that the raw material comes from a sustainable, renewable, legal source.”

In September, SBP announced that it has certified 50 organizations.