Dec. 19, 2016 – When the Tolko sawmill in Merritt, B.C., officially closed its doors on Dec. 16, one big question remained. Where will the fibre for Merritt’s biomass power plant come from? 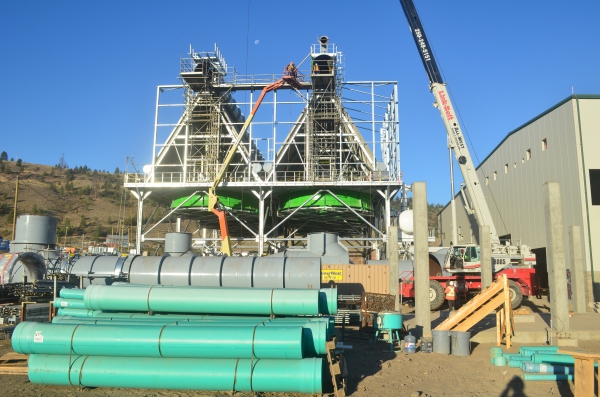 The $235-million power plant, which is being built by Spanish energy firm Iberdrola, had 95 per cent of its construction phase complete as of Dec. 9.

Fengate Capital Management and Veolia are the developers and equity investors of the biomass plant. The Merritt plant is one of two green energy projects in B.C., as part of the Merritt Green Energy Limited Partnership (Merritt Green Energy). The other is in Fort St. James, B.C.

Delays in the Merritt construction process so far were due to one of the subcontractors in the U.S. going through a bankruptcy.

In a past press release announcing the financing closure on the plant, Merritt Green Energy stated, “Fuel will be provided by local partners, including Tolko Industries, under a long-term fuel supply agreement.”

Canadian Biomass reached out to Fengate Capital for comment and received a statement from Merritt Green Energy.

“The Merritt Green Energy Limited Partnership, a working partnership between Fengate Capital and Veolia, is confident that the fuel required to run the plant will be available through an existing agreement with Tolko,” it stated.

Merritt Green Energy, which first announced the project in 2014, also said the facility requires more than 20 full-time staff to operate it and has supported more than 250 jobs at peak construction periods.

It added that the plant will generate more than 285,000 MWh of renewable electricity when it begins operations. That number is enough to power more than 40,000 homes for a year, according to the statement.

The plant is also planning on reducing its carbon footprint through the use of emissions reduction equipment.

The biomass power plant is scheduled to begin commercial operations and deliver clean electricity to BC Hydro in mid-2017.