Sept. 20, 2016 - With the wood pellet industry hurting from low fuel prices, warm winters, and unhelpful government policies in many countries, is there a light in the gloom? The potential of global markets was the topic du jour for Day 1 of the annual Wood Pellet Association of Canada conference, taking place in Harrison Hot Springs, B.C., today and tomorrow. 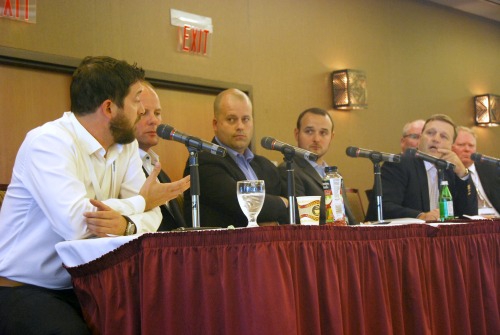 A panel of producers in the wood pellet industry discuss the producer and utility viewpoint.

According to William Strauss from FutureMetrics, Japan is the bright spot in the industry’s future. Strauss stressed that the Japanese market has potential to boost growth for Canadian pellet producers, specifically in Western Canada, but also those in Central and Eastern Canada.

“We all know that we are in a plateau right now in terms of production,” Strauss said. According to his estimates, there is currently 2.5 million tonnes of over capacity, however, with new projects and policies, that overage will be soaked up by 2018, and demand will overtake supply by 2020.

John Bingham from Hawkins Wright has similar numbers; he estimates that global demand for pellets will increase to 27 million tonnes by 2020 based on new projects in the pipelines in the United States, Japan, United Kingdom and other European countries.

Secifically Japan, with its carbon reduction mandate, is an emerging market that could change the game, Strauss said. “We think there is a high likelihood of significant demand over the next decade,” he said, estimating that by 2020 there could be demand in excess of 15 million tonnes. That demand would be best met by producers in Western Canada due to proximity. If pellet producers in Western Canada were kept busy with the Japanese market, those in Eastern Canada would increasingly send their supply to Europe.

The United States as a market is a wild card for pellet producers, with the implementation of the U.S. Clean Power Plan tied to the election this fall.

Speaking as part of a panel discussion of producers, Vaughan Bassett from Pinnacle Renewable Energy said the pellet industry as a whole needs to push to produce biomass without subsidies. He agreed with Strauss that Asia is a target market, and an opportunity for Canadian pellet producers to demonstrate that they are strong suppliers to the market.

Other discussion on the panel was sparked by a query from moderator Arnold Dale, vice president of Bioenergy Ekman & Co, who asked: is it the role of pellet producers to promote end-user products?

“I always feel that a local market is the best market,” Dale said. Getting local companies or government office and schools to convert to wood pellets creates small but sustainable demand, he argued. Panellists seemed to agree with Dale, while noting that the local strategy makes the most sense for small producers in heating markets, less so for large-scale industrial producers.

Tomorrow’s presentations include biomass power generation in the Netherlands, an update on the USDE’s Billion-Ton Report, safety in the pellet industry and new production technology.

*Read about Day 2 of WPAC here.