June 21, 2017 - A safety meeting that fit inside an office last year has now grown to the size of a convention centre. 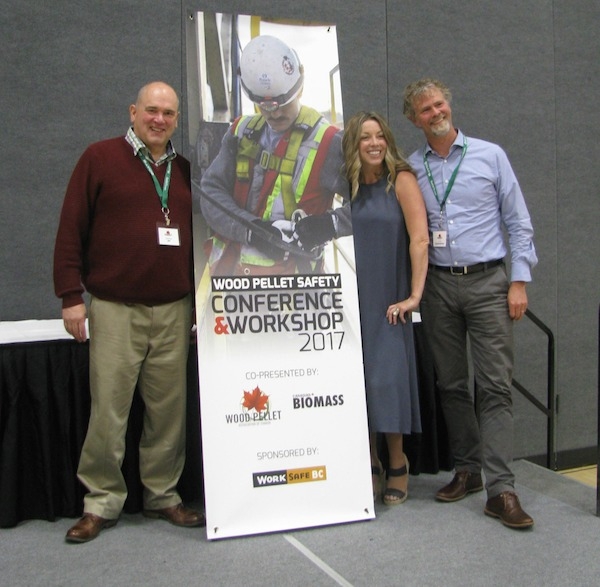 In only a few years’ time, the British Columbia wood pellet manufacturing sector went from one of the worst corporate citizens to one of the best, for employee safety, and broke some moulds along the way.

If a biofuel executive had said such things, it might be construed as industrial propaganda, but these were the words of hard-line WorkSafeBC agents who once viewed the wood pellet industry as the juvenile delinquent on the natural resources block. It was only a couple of decades old, but was already a chronic abuser of safety rules and hostile to inspectors.

But when that changed, it changed fast and it changed big. The two sides were so impressed with the wild turnaround that they made a short documentary film about it, as a how-to guide for other industries.

It also formed the crux of the conversation at the safety conference held by the Wood Pellet Association of Canada (WPAC) in biofuel rich Prince George.

“Frankly, you weren’t very good,” said WorkSafeBC occupational safety officer Mike Tasker. “Now, you are among the very best. That should cause your chests to swell. You turned that completely around. We pushed you outside of your comfort zone, but the really cool thing is, you did it. And then you started to ask us what we wanted you to do next. There wasn’t just a willingness to reach compliance – the least safe you could be to meet our standards – you started striving for excellence. That, for me, was the TSN Turning Point.”

In exchange, WorkSafeBC agreed to conservatively penalize them for any infractions and be extraordinarily helpful to Pinnacle if they took decisive corrective action.

Both sides were amazed at the extent to which the other went to reverse the adversarial history and embrace an opportunity to save lives.

While most industries point to political or market forces as being their biggest existential concern, the conference put a different threat at the top of the WPAC list: the specter of pellet plants exploding.

“We all know the stories (of Lakeland and Babine, the two lumber mills that fatally exploded due to buildups of fine wood dust), and if we want to achieve a different result we need to operate differently,” said Pinnacle’s senior VP Scott Bax, chair of the conference. “We needed a lot of change.”

It wasn’t just the ambient dust, which was shockingly thick and dangerously managed, according to WorkSafeBC’s Geoff Thomson, an occupational hygienist who led an audit of every pellet plant in the province. Doubling the problem was the presence of syngas that emanates from wood fibre in the pelleting process. The combined mismanagement of syngas and dust made these facilities a particularly hazardous workplace.

Companies across B.C. took Pinnacle’s lead and WorkSafeBC’s hand, and aggressively changed their ways as a block.

“A lot of heavy lifting was done here, and I want to thank you for helping us move forward, for taking a chance on showing us your dirty laundry,” Thomson said. “Not every sector is interested in working with us, so it was an important step your industry took.”

WorkSafeBC also had to change some of its attitudes to allow for the paradigm shift, said Budd Phillips, the agency’s regional prevention manager. Now, said Phillips, “other regulators have asked us ‘how did it work?’ so there is interest from other provinces and other industries.”

Dustin Meierhofer had a long career in operational forestry before recently shifting to the BC Forest Safety Council. He applauded the wood pellet industry for its innovative leadership.

He explained to the audience that addressing safety happens in phases. First, you have to do a wholesale audit of your operation to pinpoint all the dangers. Second, management has to invest in mitigation. Third, the employees must take ownership of their own health at work with steadfast communication about safety problems.

The wood pellet industry isn’t nearly as experienced in safety measures as sawmilling, mining or construction. That initial data must still be gathered, sorted and documented. Meierhofer said a working group formed in spring looking specifically at the issue of dust storage, the wood pellet industry’s largest area of concern.

WorkSafeBC recognizes that while fine wood dust is a hazard in most industry settings, it is the main ingredient in the making of pellets, so it must be regulated differently. There are no such regulations in place. Therefore, said Meierhofer, WorkSafeBC was giving the industry the chance to have comprehensive input into how the regulations might work in their special circumstance.

Meierhofer said the working group was aiming at the end of July for handing WorkSafeBC a working draft, after which there would be study and revision until approximately September.

“The way your sector worked with WorkSafeBC is certainly a model,” Meierhofer said. “There are some challenges ahead but I see some dedicated people looking at some definite outcomes. We (on the working group) want to be as thorough as we can, provide what we think are the best answers up front, so we can speed things up and ease WorkSafe’s process.”

Cheering them on is someone who knows agonizingly well how workplace safety inaction feels. Candace Carnahan showed, with deft balance, how to stand on one foot if you’ve taken your prosthetic leg off to show an audience what happens when factory machinery isn’t safeguarded. She lost her lower left leg in a paper mill incident and now tours Canada as a workplace safety experiential consultant.

“If you see something, say something,” was her main message to the conference crowd. She stressed the imperative of refusing any work that puts yourself or your colleagues in any sort of danger, and managers backing them up.

“You can do (a routine unsafe act) a thousand times and be fine, but as soon as you’re caught once there is no going back,” she said. “It’s not about me and it’s not really about you. It’s about whom you said goodbye to this morning and expects to see you back home at the end of the work day. Safety is not nine to five, safety is not four on-four off, safety is 24/7. Safety is a lifestyle.”

When Pinnacle enacted their new way of corporate life in 2014, their medical incident rates dropped by 70 per cent, their lost-time accident rate dropped by more than 80 per cent, there was a 1,500 per cent increase in safety feedback from employees and contractors, but their EBITA (Earnings Before Interest, Taxes and Amortization) shot up 140 per cent.

“Safety makes you money,” said Lobsinger. He didn’t offer to change his industry because of the bottom line, but that is the first line of the documentary. The 11-minute film will soon be released to the public to perhaps show other industries how to put safety first the way the wood pellet sector has.