March 22, 2017 - The Government of Canada and the Wood Pellet Association of Canada (WPAC) jointly sponsored the Central European Biomass Conference (CEBC), which took place in Graz, Austria from Jan. 18 to 20, 2017. One of our ongoing objectives is to position Canada as a reliable source of high-quality, sustainably produced wood pellets and the CEBC presented a good opportunity to do this. It is essential to continually reinforce to our European customers that our raw material comes from the most sustainably managed forests in the world. 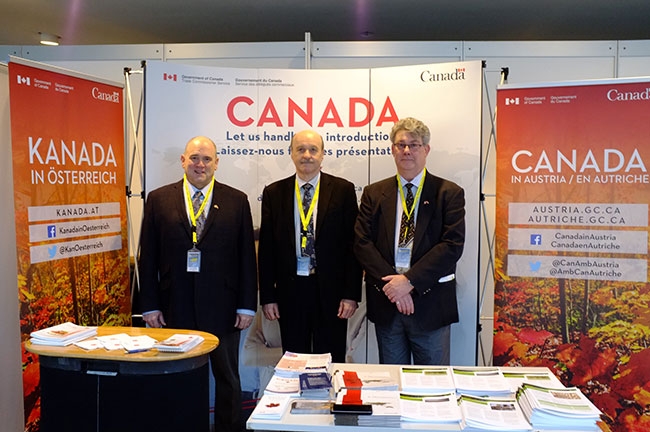 In his opening remarks at the conference, Mark Bailey, ambassador of Canada to Austria, described Canada’s commitment to forest management and the government’s support of the wood pellet sector.

David Patterson, on behalf of the Canadian Council of Forest Ministers (CCFM), also gave a presentation, as did I. My presentation focused on Canada’s wood pellet sector, while David’s presentation described Canada’s forests, our country’s forest management regulatory framework, and Canada’s rank as the No. 1 country in terms of third party certified forests. With 166 million hectares of certified forests, Canada’s total is nearly four times that of second place United States at just 47 million hectares.

The CEBC is held every three years, attracting more than 1,100 participants from all over the world.

There is a home building fair attached to the conference, which showcased the latest in biomass boiler technology. The fair attracted 40,000 visitors. Austria is a leading bioenergy user with 17 per cent of its total energy and 57 per cent of its renewable energies being created with biomass.

As a result of our meetings, WPAC is co-operating with Bioenergy 2020+ GmbH. This federally funded Austrian company is engaged in applied bioenergy research including wood pellet combustion.

We are trying to put together a joint project with two objectives: (1) to convince Canada’s provincial boiler safety authorities to accept the Austrian biomass boiler standard EN 303-5 so as to facilitate the import of Austria pellet boilers to Canada; and (2) to establish a biomass boiler education and demonstration centre, likely in Eastern Canada.

If successful, Austrian boiler manufacturers will benefit by increasing their exports to Canada and potentially by establishing Canadian manufacturing.

During the CEBC, a full day was devoted to the European pellet sector. This included presentations from Austria, the Baltics, Bosnia and Herzegovina, Croatia, France, Germany, Italy, Serbia, Slovenia, Sweden, and Ukraine. Here are a few highlights:

Europe continues to be Canada’s most important market for wood pellets, accounting for more than 80 per cent of Canadian exports. Most are destined for the industrial power sector in the U.K.,

Belgium, and the Netherlands.

Canada continues to have a small but steady presence in the Italian residential heating market.

Our participation in the CEBC enabled us to reinforce the reputation of Canada as a reliable supplier of high-quality, sustainably produced wood pellets for the power sector.

It also gave us an opportunity to pursue co-operation with Austrian boiler manufacturers, which could help us grow pellet consumption in Canada. It is remarkable to see how two tiny countries like Estonia and Latvia have emerged as major producers that together rival Canada. And other European countries are rapidly increasing their pellet production.

To sell pellets in Europe, the most important factors are: (1) evidence of sustainability, (2) quality, (3) financial strength and reliability and (4) competitive pricing.

Canada must continue to build its reputation in all these areas in order to maintain and grow market share.