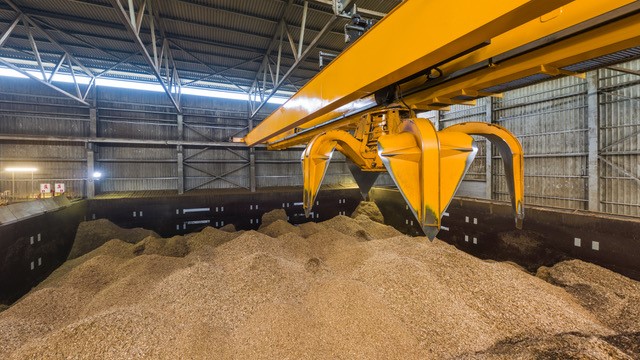 FortisBC will soon be producing renewable natural gas (RNG) from wood waste – a first for North America. On April 30, 2020, the company announced that it was teaming up with REN Energy International Corporation (REN Energy) for this new endeavour.

This process has never been done on a commercial scale in North America. But as Philip Viggiani, president of REN Energy, says, “If we build it, they will come.”

The partnership comes after FortisBC put out an open call six years ago looking for products to convert from organic waste into RNG. This new source of RNG will add to the RNG supply underpinning FortisBC’s existing RNG Program.

“The RNG program was born out of this idea of, ‘How do we make use of existing resources, keep our customers happy and align with government policy?’ The idea of renewable natural gas was born from the idea of getting methane from any form of organic waste and putting it into our gas pipelines for our customers,” says Scott Gramm, FortisBC’s manager of RNG supply.

“If we build it…Who will come? All who have had no choice but to burn wood waste, which adds greenhouse gas (GHG) emissions to the atmosphere,” Viggiani says.

REN Energy will be collecting wood waste from sawmills and municipalities, along with residuals in the bush. Wood waste will also be collected from vineyards and orchards.

The methane produced from the wood waste will be exactly the same as the methane found in conventional natural gas. This process will create a one-to-one replacement of conventional gas. The RNG will act and behave in the exact same way as the molecule it will be replacing.

The process
But how exactly will RNG be created from wood waste? Gramm says it is a multi-tiered process.

“The first stage is something called gasification,” he explains. “This process is super heating the wood waste without oxygen in it or with as little oxygen in it as possible. So, it’s not burning. Combustion or conventional combustion relies on a mix of air and fuel and heat. In this case, you’re just super heating the wood and you get a direct conversion to gases from the material.”

This first step presents a challenge, however. The synthetic gases (syngas) are a mixture of other gases that are not suitable for pipeline injection. So, after gasification, the syngas will go through a preliminary cleaning to remove elements like tar or moisture that gets into the wood that could potentially be a contaminate.

“You then go to the next step in which you will add some sort of steam or hydrogen. Now you’re going to combine the hydrogen with the carbon that’s in the gas – in the form of carbon dioxide or carbon monoxide – and you’re shifting gas composition to become methane. You’ll end up with a methane mix and, typically, a carbon dioxide,” Gramm says.

The final step is to separate all of the carbon dioxide, leaving only methane, which can then be injected into FortisBC’s natural gas system.

A big commitment
But the RNG from this project will only be flowing through pipelines in 2022.

First, REN Energy has to build the $130-million facility where the wood waste will be processed to produce pipeline-quality RNG. This facility will be built in Fruitvale, B.C., a prime location in terms of its proximity to sawmills, logging sites and other wood product manufacturers. Meanwhile, FortisBC will build a quality checking and pressure regulation station, as well as a pipeline to connect to their already existing transmission line.

REN Energy expects to source wood waste from multiple mills, including Fruitvale, B.C.-based Atco Wood Products. The company will use chips, sawdust, bark, branches and waste products from the mill. They are initially collecting over 100,000 thousand tonnes of wood waste per year for this project.

FortisBC and REN Energy are now finalizing the engineering for the facilities and expect construction to be completed by the spring or summer of 2022.

“The big commitment on the table from FortisBC is a 20-year contract for the gas at a price that’s above the current price for conventional natural gas,” Gramm says. “REN Energy produces the energy, we buy it at a premium price on behalf of our customers, we meter it, monitor it, put it in our pipeline, and match that volume to the distribution of it and ultimately the sale of it.”

FortisBC expects the new facility to produce one million gigajoules (GJ) of RNG per year by 2022. An average household in B.C. uses about 90 GJ per year. So, “we’re looking at 12,000 homes’ worth of gas. It’s a fairly significant chunk of gas, especially considering in 2019 we only produced or bought a total of about 225,000 GJ,” Gramm says.

A double win
Both FortisBC and REN Energy are looking to support local communities in B.C. through this project.

REN Energy plans to double their internal staff in the near future for this project. Viggiani foresees hiring 20-22 people within the next year-and-a-half to two years. Ultimately, the project will add up to 25 direct jobs and 85 indirect jobs, providing substantial economic growth for the surrounding Kootenay communities.

Since the project’s inception, the companies’ main goal has also been to reduce GHG emissions in the province.

Both FortisBC and REN Energy say that the government has been supportive of their objective in this new endeavour. They believe that using waste products to produce RNG and creating jobs in the process is a double win for the government and surrounding communities.

“So far, we have had nothing but excitement and curiosity and a lot of backing from municipal and district leaders,” Viggiani says.

FortisBC also has publicly-stated environmental goals, which includes reducing emissions by 30 per cent by 2030 on behalf of their customers. They call it 30BY30 or #30BY30. This goal coincides with the B.C. government’s policy objective (CleanBC) of 15 per cent renewable gas content by 2030.

A stepping stone
The companies hope that within the first year of operations, this endeavour will act as a stepping stone to several more RNG projects. Gramm says they’ll be watching carefully to make sure the gas produced from the wood waste meets their expectations. “We want to see this hit good volume numbers so that FortisBC reaches their sales goal. Ultimately, if they do, this model can be duplicated and improved upon.”

FortisBC and REN Energy will also be looking at their progress for possible future endeavours using this technology. Gramm says he could see doubling the Fruitvale plant’s capacity, as well as replicating their plant and production model, or potentially improving upon other areas where there is an intersection of wood waste and pipeline.

Although the RNG industry is a small one, Gramm believes that anyone who knows anything about the industry will be watching this project very carefully to see how well they do.