Feb. 18, 2015 - Canada’s green university continues to demonstrate its commitment to bioenergy technology as it has completed the next phase of its expansion project. 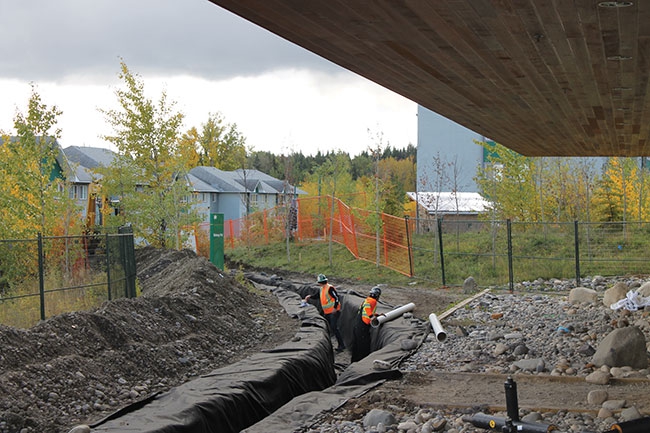 The piping network connects the pellet boiler and Nexterra gasification system with the first-year residences and the daycare. Canada’s green university continues to demonstrate its commitment to bioenergy technology as it has completed the next phase of its expansion project.

The University of Northern British Columbia in Prince George began the integration of bioenergy into the campus’ energy system with the introduction of a pellet boiler to provide heat for its Enhanced Forestry Lab and greenhouse facility before investing in a $16.7 million Nexterra gasification system in 2012. The Nexterra system has replaced much of the natural gas consumption at the school, saving the university approximately $700,000 per year.

More importantly, the move provided the additional capacity to bring another set of campus building onto the bioenergy system: the campus’ two first-year student residences.

Civil construction to run piping to each of the student residences was down at the same time as moving the pellet boiler. The work began in mid-September; with local contractor IDL Projects Inc. awarded the contract. Specialized piping was brought in from Europe, building on  some of the successful construction elements from similar bioenergy systems there.

Moving the boiler and putting the pipe network in the ground now rounds out the bioenergy system, providing the necessary distribution points to meet current demand and provide options for future demand.

“There is pipe in the ground from the bioenergy facility, which runs to the Enhanced Forestry Lab, and then runs to the two residences and the daycare,” said David Claus, assistant director of facilities management at UNBC. “In getting that completed, we’ve got all of the civil construction works and the outdoor work done. We have yet to connect the piping inside each of the buildings, to the heat loads. So we’re not running the system now but we’ve got the ground portion of it completed.”

The delay is the complex design needed for connecting the pipe network to the existing natural gas heating systems in place in each of the residences. That design is expected to be done shortly, which will allow the work to go out for tender. The hope is that the work can be done in the spring, but renovations planned for each of the residences following this school year could delay the work until the summer.

Future expansion
By moving the boiler, and running the pipe network to the residences, the bioenergy system is in a position to facilitate future expansion. Claus admits that there are few buildings to currently expand the network, but it does open up energy supply for expansion opportunities that the campus could be considering. Two things discussed at length in the university community are the potential for adding upper-year residences, as well as buildings to house food production that could help make the area more self-sustainable.

Claus recognizes that more heat could also be captured through the Nexterra system. The flue gas from the system is not condensed, causing a lot of heat to come off of it. There is energy in the hot water vapour that is not being utilized and, by condensing the flue gas, additional heat can be recovered without burning any more fuel.

“That is what, on the supply side, I would like to see as the next step,” said Claus. “It looks like we could probably boost the output by about 10 per cent by doing that.”

The piping network connects the pellet boiler and Nexterra gasification system with the first-year residences and the daycare.

Education first
There has always been an educational component to the bioenergy system at UNBC. The Nexterra system provided an example of a small-scale biomass heating system that could be used in remote communities throughout northern B.C., and the current expansion will provide information on how to expand the system to surrounding buildings that may need to be brought online.

Now the university is in development of a video series that will help teach remote communities about district heating. Grad student Titi Kunkel is helping to produce the videos while travelling to remote communities, particularly First Nations communities, to provide an understanding of the benefits of district heating using biomass. She has already brought leaders from a few remote First Nations communities to UNBC to show them how the bioenergy system works, and to teach them about how the system could work in their respective communities based on the existing wood waste supply in the area.

The videos, now in production, will be an educational tool for providing an overview of community heat using biomass. Once those videos are released, Kunkel and her colleagues hope that they will be distributed beyond the current campus’ reach in B.C. to interested communities for nationally and internationally.

That will help the university’s continued push as Canada’s green university, and become a model for community bioenergy systems across Canada.